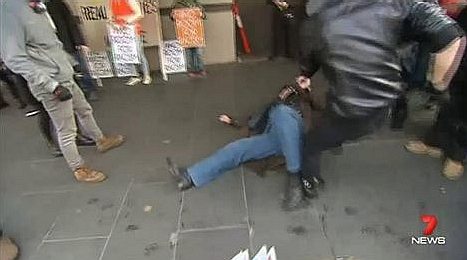 As reported here last Saturday and Sunday, Reclaim Australia held a series of anti-Islamization rallies in a number of Australian cities over the weekend. Most of the demonstrations were met by violent “anti-racist” counter-demonstrators who generally outnumbered their opponents.

The following first-hand account of what happened in Melbourne on July 18 was sent in to the Q Society by a Reclaim Australia supporter, and passed on to us by a reader Down Under. The Q Society had shared it via a mailing list under the header “Who Rules Melbourne?” Their introductory note:

The following is a personal account sent from a supporter who attended the ‘Reclaim Australia’ rally in Melbourne on Saturday, 18 July 2015. We send you this first-hand account so you may know and share with your friends what really happens in our streets. The media will not tell you the full truth.

The Q Society are to be commended for propagating this report, but I must say that I disagree with their opinion that “We don’t think street rallies are the answer to this problem.” Street rallies are absolutely essential to our movement, but they need to be intelligently organized and prepared for action:

I’m sure readers can supply additional pointers for utilizing the coverage of street encounters to the advantage of the Counterjihad.

There’s no point in complaining about the way the media cover these events. We know they will be biased against us. And we also know that the police prefer to arrest patriots and Islam-critics rather than the “anti-racists”. These facts are a given. We can’t change them, so we should be prepared, and use information warfare judo-moves against them.

“I have been a hotelier and nightclub operator for most of my life and have witnessed a fair bit of biffo in my years. Nothing prepared me for what I was about to be confronted with at the Melbourne ‘Reclaim Australia’ rally. Arriving fashionably late at approximately 11:30 am, I approached the barriers at the southern end of Spring Street. The police directed me to go around the block to the Northern end. I followed another gentleman, in his sixties, who had an Australian flag protruding from his pocket. We both turned the corner, into little Bourke Street, where there were barriers, and quite a mob of the so called ‘anti racists’. Milk was flowing down the gutters, and further up was a stockpile of milk crates, with several people marked as ‘medics’ treating activists the police had just sprayed with capsicum spray.

The gentleman with the flag in his pocket, was suddenly accosted by some of the mob. He was hopelessly outnumbered and was being pushed around. The mob were trying to steal his flag, and eventually were successful, after assaulting him by punching and kicking him. Once they had the flag, they proceeded to tear it, throwing it on the ground and stomping on it. As he was trying to escape, the mob were surrounding him screaming obscenities and pushing and shoving him.

I made my way onto Spring Street, where there was an even larger mob, maybe 500 or 600 people, some with megaphones. At a guess, it would appear that 10 to 20 per cent of this mob had some sort of face covering. There were a few late comers or stragglers attempting to get through to the ‘Reclaim Australia’ section. It was futile. As soon as anyone in the mob identified a person as a Reclaimer, a large horde of 20 to 40 of the mob would rush to them, and in many incidents I witnessed, assault them, knock them to the ground, and kick them on the ground. It became a mob mentality. Anyone with an Australian flag had it stolen from them and was assaulted. Almost every assault I witnessed was by twenty or more onto one.

This mob was well organized. They had marked ‘medics’ attending to any of theirs who had been sprayed or injured. Crates of milk were stacked strategically around the place to wash the capsicum spray from the eyes and faces of anyone who got sprayed by the police. They also had people in their group with bags of gold glitter, which were thrown over anyone they identified as a Reclaimer. They were now ‘marked’ as enemy.

Towards the end three Reclaimers were trying to leave by the north end of Spring Street. They stayed together and pushed through the mob, who at the start seemed unwilling to take them on because there were three rather than one. The mob were screaming obscenities at them and verbally threatening them. The three Reclaimers turned and faced the mob of maybe 50 or more, and invited any of them if they felt like it to come at them. No one in the mob moved. There was quite a heated verbal exchange for a few minutes. The three Reclaimers started to retreat, at first backwards, and as they moved, the mob followed them. When the Reclaimers turned and started briskly walking the mob rushed them. They were attacked from behind and were no match, being so outnumbered. The police moved in and doused them all with spray.

The three Reclaimers were singled out by the police, cuffed and taken away. It was extraordinary, that none of the mob were arrested, given that they attacked the Reclaimers who were retreating and one of the mob was stomping on the head of a Reclaimer who had been taken to ground. I was three or four metres from this incident when it happened.

It is a sad day for Australia, when a feral mob controls the streets with almost impunity and physically attack anyone else who does not share their twisted world view.”

28 thoughts on “Who Rules Melbourne?”