Our Israeli correspondent MC sends this essay on personal integrity vs. collective rights, and the larger questions raised by these issues in the ongoing battles of the Culture Wars. 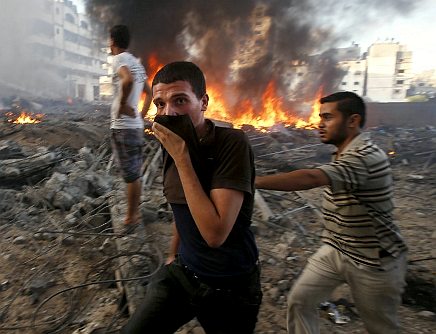 Who is Responsible?
by MC

The ISIS infiltration of Hamas-controlled Gaza and the Sinai is significant. It means that the people there want more Islam, not less. More violence, and even more gruesome epics that tell the world that Muslims are macho.

We must therefore understand what incites males to the butchery of their fellow beings. It is something that is there in all of us, and we have seen it erupting wherever and whenever Judeo-Christianity is under pressure.

The Inquisition was one such event, as were the politico-religious purges of the 18th and 20th centuries.

At the basis of the Judeo-Christian civilization is the personal discipline of the Ten Commandments and their Christian extension to “love thy neighbour as thyself”. Where this policy is implemented, however inconsistently, then society ‘improves’ and civilization gains. However, where group-think takes over, and the burden of love is lifted from the individual, then ‘us vs. them’ becomes dominant.

When we remove from the individual the need be accountable for his/her actions, and where we immerse the individuality in a group, then the group seems to resort to its animal side very quickly.

When Jews were massacred in the 1920 Jerusalem riots incited by Haj Amin Al Husseini (and his British controllers) the cry went up: “The government is with us; kill the Jews!” 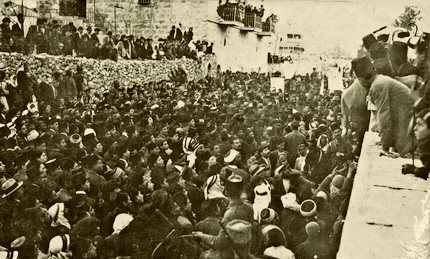 What was important here is that individual accountability was suspended, and, in this case, the (British) government was deemed to be responsible. The subsequent meting out of ‘justice’ only confirmed the situation. Jabotinsky got fifteen years for defending Jews (later commuted to 1 year after questions in the House), and the Arab who dashed a child’s head against the wall in front of (Jewish) witnesses had his case dismissed through lack of evidence. Haj Amin was arrested and bailed; he fled to Syria:

“It was asserted soon after, by Chaim Weizmann and British army Lieutenant Colonel Richard Meinertzhagen, that Haj Amin al-Husseini had been put up to inciting the riot by British Field-marshal Allenby’s Chief of Staff, Colonel Bertie Harry Waters-Taylor, to demonstrate to the world that Arabs would not tolerate a Jewish homeland in Palestine. The assertion was never proven, and Meinertzhagen was dismissed.

The Zionist Commission noted that before the riots Arab milkmen started to demand their customers in Meah Shearim pay them on the spot, explaining that they would no longer be serving the Jewish neighbourhood. Christian storekeepers had marked their shops in advance with the sign of the cross so that they would not be mistakenly looted. A previous commission report also accused Storrs of inciting the Arabs, blaming him for sabotaging attempts to purchase the Western Wall as well. A petition circulated among American citizens and presented to their consul protested that the British had prevented Jews from defending themselves.”

The British Foreign and Colonial Office (the UK equivalent of the State Department) was rabidly pro-Arab and anti-Balfour Declaration. These riots were timed to precede the San Remo conference which the FCO and the British Military wanted to derail. So the ends justified the means.

Islam has always been used as a blunt instrument by whoever holds the upper hand politically or economically. Its very nature rails against individual responsibility and thus renders the ‘Muslim man’ uniquely manipulable where brutality and mob violence are concerned. It is not that events of mass murder are uncommon, but in most cases they are kept low profile so that the common people are unaware. Sometimes these things become public, and a human sacrifice is necessary (see My Lai and Lt. Calley). Somehow blame descends on the most junior and therefore the most vulnerable. Whilst Calley was involved in the murders, he was not alone, and, it would appear ‘he was only obeying orders’, an excuse which, it is assumed, subsumes personal responsibility.

In a Judeo-Christian society, personal integrity is important. It is a responsibility that is not shared. As a child, I was not allowed to play with the boy at the corner of the street because he had ‘been in court’ and was therefore not ‘nice’. I did play with him; he was fun and inventive, but I understood that if I was caught, it was my responsibility.

I ask myself: Why I am disgusted with the LBGT movement? The answer is that what consenting adults do in private, gay or straight, is their own business, not mine. However, when anybody chooses to thrust their sexual proclivities in my face, then I find it offensive. The LBGT movement is very happy to cause this offense, but does not like to be offended itself. This is normally just called hypocrisy, but when protected by so called ‘hate speech laws’ it becomes much more sinister.

Those who lack personal integrity tend to also be overly sensitive. It brings to mind the old saying “those who matter don’t mind, and those who mind don’t matter.” The problem comes when the picture is distorted by legislated ‘love’. I am forced to ‘not hate’ (i.e. love) those whose behaviour I abhor.

I think it is also in my DNA to dislike those who are offensive to me, but how come they can get away with their DNA driven activities, while I cannot? White lives don’t matter, and white male Judeo-Christian heterosexual proclivities certainly don’t matter.

These two men condemned everything that I am, or aspire to be. They each arbitrarily took my birthright and shredded it. My grandfather was a coalminer from his early teens. He helped build the infrastructure that provided his children and grandchildren with a better education and a better future. By his dirty, unpleasant labour he invested his life in their betterment.

Then along came a covey of well-heeled pseudo-intellectuals who decided that his investment was out of place because it was an investment in ‘white supremacy’ and was thus, in their opinion, invalid. So they stole it from him — my meagre inheritance — to give to some other ‘oppressed’ group whom they believed deserved it more. All in the name of ‘equality’, of course.

Judeo-Christianity establishes my absolute right to inherit from my grandfather, but for a socialist, ‘property is theft’. Thus the fruits of my grandfather’s labours belong to everyone, as do those fruits of my own labours. And, worse still, under socialism, ‘everyone’ does not mean ‘everyone’, it means only their ‘favoured races’ in the struggle for life.

Edward Said also ignored history, and his own Christianity, and accused the ‘white man’ of cultural imperialism. The implication being that all cultures are equally valid and that Judeo-Christianity was just one of those many, but was also uniquely guilty of inflicting itself on the world as ‘better’ than the others. Those same well-heeled pseudo-intellectuals believed him. And why shouldn’t they? He was one of them: private school, Princeton, silver spoon, etc. To him, the likes of my grandfather never even existed.

The world expects the Greek people to pay the debts of those same well-heeled pseudo-intellectuals who made the decisions to borrow and to lend (and maybe skim a bit off for themselves). So the game is exposed, from the peasants according to income, to the elite according to influence. The banksters made some bad calls — are they expected to take responsibility for their actions? Oh, no! They are above all that.

Removing Judeo-Christianity was supposed to result in a fairer and more just society, a society where ‘reason’ reigns supreme. However, it is my observation that it has created a society where Chaos is more apparent. It is difficult to assess just what went on here: Was the equality and social justice a propaganda slogan for the useful idiots who bought the message? Or was the chaos always the intention?

Socialism, the current iteration of the age-old and ubiquitous feudal system, has seen many cycles of failure. It survives because its zealots always think that this time it will be better, and each time it gets worse. There is still time to begin to purge our societies of the bought traitors and the vile criminals, but they will not go peacefully.

After all, that is why they want to disarm you!

11 thoughts on “Who is Responsible?”