Our Israeli correspondent MC returns with an essay on the rectification of names, as applied to the Islamic State and other sundry matters.

There was a time when one called a spade, a spade, but then political correctness dictated the we only use nice names for the approved entities, as if changing a name changes the character of the object. The ‘Zionist entity’, however, did not change. It was not in the approval zone, so its derisive nature was allowed to continue.

So what are we to call the ‘Islamic State’? ISIS or ISIL or Daesh?

When is a state not a state? Palestine is considered a ‘state’ but is not, and the Islamic State is most certainly a state, but we are not to be allowed to call it such; the title gives it too much credibility.

We like to mis-remember (or ignore) the adulation that the Nazis got in the 1930’s, a time when Adolf Hitler was featured in mainstream magazines: 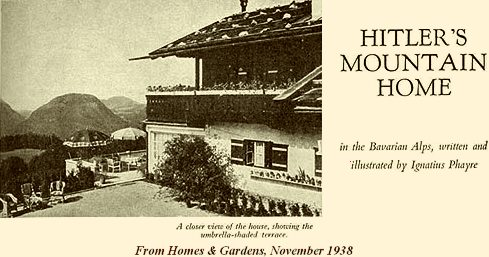 The world of political correctness is strangely schizoid when it comes to names. Good entities must have good names; bad entities must have names which conjures up negative images, so ‘Islamic State’ is thoroughly inappropriate. A bestial organisation that a recognised victim organisation abhors has a ‘stately’ and ‘peaceful’ name — it must be renamed soonest.

Along with a name is a myopia of moral relativity that hopes the likes of Islamic State will evaporate when the clock strikes midnight, and that the Islamophiles and their associated taqiyya brotherhoods will wake to find that reality has departed and the ‘dream of peace’ can be perpetuated.

IS is a serious impediment to the furtherance of the delusion, but t is the raw reality of Islamic aspirations, and it is not going to go away quickly. In 1938 the world was still under the illusion that the Nazis were well-intentioned and intrinsically good; apart from some well deserved ill treatment of Jooos, their policies were not that far away from those of the New Deal.

There came a point with the Nazis where their aggression could no longer be ignored, and this is where we started bombarding them with — high explosive leaflets…

It was only when they successfully invaded Norway and France that the sordid reality struck home; Nazism was nasty, it was not a ‘religion’ of peace (in our time) after all. Winston Churchill, who might have been a GoV contributor had there been an appropriate temporal displacement, had been telling the world for many years that German intentions were not honourable. He was finally believed, but only just in time, and the leaflets finally gave way to explosive munitions. Britain was on the brink, the U-boat menace was profound, and national starvation was a real risk even if invasion was never a serious threat.

Two lucky events saved Europe, firstly, two Polish refugees got an Enigma machine to the UK, giving the Allies access to enemy signals, which were presumed to be secure. For, although the Germans had cracked the British codes, the British knew it. German confidence in Enigma was such that when it became obvious the allies were intercepting information, they assumed that there was a security leak in the form of an informer, and initiated purges as a result.

The other lucky event was the improvement of the magnetron in 1940, creating the ability for airborne radar to detect submarines on the surface.

IS has got the West cold. We must assume that it and its agencies have totally penetrated Western governments, their institutions and their militaries. The mind-bending tool that is a TV network controlled by malicious forces renders the mass of people unaware of their danger, so there is no pressure on politicians to face up; disbelief in PC/MC is still ‘conspiracy’, and therefore derisory. Danger? What danger? Nothing to see here, folks.

So once more we have to await events, and hope once more for some lucky breaks.

What we are seeing in Greece is the reduction of the Greek man in the street to peasanthood. He is the payer of last resort, and the financial foibles of his ‘betters’ consequently fall on his shoulders. The rich and powerful make mistakes, and the poor and miserable pay the price. Tell me why is this not called oppression? Now we see that Greece is to be ‘asset-stripped’ to pay the debt, just as if the country had lost a war a thousand years ago. It was called ‘looting’ back then.

We now live in a world where there is no debate, and where all issues are decided by an arbitrary assessment of ‘good and evil’ as dictated by a self-appointed elite based upon wealth and celebrity status.

This is not a new state of affairs; historically it was the norm. What we have seen is a ‘glitch’ in history, where, for a few hundred years, equality before the law held sway, and the elites, for a short while, became accountable for their actions. The McCarthy debacle put a stop to that, and the gagging and subsequent humiliation of McCarthy effectively opened the floodgates of elitist deceit.

Only this time there was the ultimate propaganda weapon available: Television.

We cannot fight television in the hands of gifted manipulators. Every pixel tells a story, and he who controls the story controls the opinions of the millions who sit before the flickering tube, mesmerised and cauterised from day-to-day reality.

The modern TV villain does not wear a black hat anymore. Instead he goes to church and reads the bible, and worse, he has views that are not mainstream socialist.

So welcome to the world of techno-paganism folks — a world where man’s guesswork has replaced God’s knowledge:

This know also, that in the last days perilous times shall come.
For men shall be lovers of their own selves, covetous, boasters, proud, blasphemers, disobedient to parents, unthankful, unholy,
Without natural affection, trucebreakers, false accusers, incontinent, fierce, despisers of those that are good,
Traitors, heady, highminded, lovers of pleasures more than lovers of God;
Having a form of godliness, but denying the power thereof: from such turn away.
For of this sort are they which creep into houses, and lead captive silly women laden with sins, led away with divers lusts,
Ever learning, and never able to come to the knowledge of the truth. — 2 Timothy 3 v 1-7 (KJV)