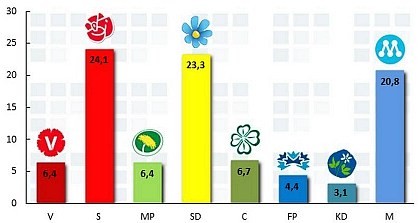 According to the latest poll, the Sweden Democrats (Sverigedemokraterna) have moved into second place, pushing past Moderaterna, who until the last election were the governing party in Sweden.

This despite the fact the Sweden Democrats are universally vilified and demonized by the media and the other parties in Sweden. The post office refuses to deliver their mailings. Party members are beaten up by antifas, and their houses are firebombed. To be discovered as a sympathizer of the Sweden Democrats is to risk losing one’s job.

The latest poll was conducted by a Norwegian outfit, because Swedish polling firms refuse to ask respondents their opinion about Sverigedemokraterna.

The following account was translated from Swedish sources by Ted Ekeroth:

“This is big smack in the face for the Establishment — the old parties and the mainstream media. It doesn’t, however, come as a big surprise to many who follow Swedish politics, as the increase in popularity for the Sweden Democrats has gone up steadily over the years, with a burst since 2010,” comments Ted Ekeroth (SD).

An interesting note is that the SD percentage of the vote has increased between 50% to 100% for each election since the party was founded in 1988 — the difference in number of votes between the 2010 election and the 2014 election is a whopping 235%.

“My guess is that we will be the biggest party in the next election, planned for September 2018, but which might come earlier due to the situation in the parliament, where we have a extremely weak and unprofessional minority government, run by the Social Democrats with support from the Environment Party and the Left party [former communist party].

“The completely absurd policies that Sweden has held regarding immigration the past 35 years have been hidden and denied by the Establishment, but the ever-increasing number of non-Europeans coming to Sweden has taken its toll, and people are slowly starting to have the courage to stand up and say it. The social stigma about voicing concern over the immigration policies or, God forbid, to say that you vote for SD, has been and still is very powerful. People have been coerced and threatened to keep their mouths shut, or they risk being fired from their jobs, kicked out of their unions and have friends and family cut ties with them altogether.”

Here are some graphs regarding SD, the polls and election results. The different colored lines are different opinion poll institutes:

This is the linear trend for SD. Red dot = election results, September 2014:

More graphs and polling data are available at www.status.st.

6 thoughts on “The Sweden Democrats Pull Into Second Place”