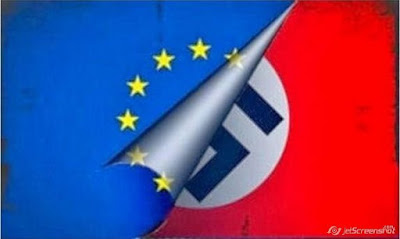 Carl in Jerusalem is keeping an eye on the growing openness of European anti-Semitism. In this case, the EU’s move toward stopping its banks from lending to Jews in Judea and Samaria. It would appear to be a more toxic form of BDS this time.

Europe’s priorities continue to be anti-Semitic.

The European Gestapo is now trying to stop EU banks from lending money to Jews and Jewish businesses with operations in Judea and Samaria.

The most significant proposal is on banking, where large Israeli institutions have daily dealings with major European banks, while also providing loans and financing to Israeli businesses and individuals based in the settlements.

Under European Commission guidelines from 2013, EU- and member-state-funded lending cannot be provided to Israeli entities operating in the occupied territories.

With the British government holding a controlling stake in some banks following the financial crisis, that would in theory prevent those banks providing financing to Israeli counterparts that have dealings in the settlements.

To an outsider, this has always appeared to be yet another incremental step in the deeply insane anti-Jewish “philosophy” whose aim is the annihilation of Israel. When Israel was unilaterally and forcefully attacked by the Arab bloc in 1967, it was presumed the Jews would lose. The defeated aggressors, licking their wounds, changed the rules of war. Since time immemorial, the primary rule of war is that “to the victor goes the spoils”. In this case, the ‘spoils’ being territory Israel needed to defend itself against further such aggression. In Crazy World, it’s a given that anything Israel does to defend itself from the prospect of such aggression is wrong. Thus, the perverted UN & OAJH (Other Assorted Jew-Haters) Inc. are obsessed with those “occupied” lands. But in reality, those territories are not occupied, they are simply conquered.

So what better way to increase its choke-hold on Israel than to cut off the customary money flow? Carl says:

“Do day-to-day dealings between European and Israeli banks comply with the EU requirement not to provide material support to the occupation?” the report asks, saying it is an issue that EU member states have yet to resolve.

The issue extends into loans and mortgages. An Israeli with dual European citizenship should, in theory, not be able to use a settlement property as collateral for a European loan since Israeli-issued property deeds are not recognised.

Another area in which the EU may be in violation of its own rules relates to European charities that are tax-exempt while using funds to support activities in the settlements, which the EU regards as illegal under international law.

So: no bank money, and no tax-exempt charitable funds. That should cover their “Divestment”, right? Not quite. Carl goes on to list the myriad of ways in which Europe likes to display its solidarity with the losers victims of those wars (never forget the suicidal West’s obsession with putting up and then propping up victims, even self-impaled victims, onto pedestals):

And the report questions whether Europe should accept qualifications from academic, medical and other Israeli institutions based in the West Bank given that it does not recognise Israel’s sovereignty over the territory.

Likewise, there is a question mark over whether the EU should be dealing with Israeli institutions — such as the Ministry of Justice and the national police headquarters — which are based in East Jerusalem.

Is this what we can expect next?

Carl’s rhetorical question is answered by the link he cites at the beginning of his post, and from which he draws his concerns. There are many BDS demons in the details of that report from Reuters:

The EU agreed this week to push ahead with introduction of labels that specifically identify Israeli goods made in settlements in the occupied West Bank, a policy that has angered Israel;

but now an influential European think-tank is proposing going much further, including the targeting of Israeli banks.

And just guess what that tanked thinking proposes?

The European Council on Foreign Relations, which frequently informs EU policy, argued in a paper on Wednesday that the EU is in breach of its own laws. It had to go further to distinguish its dealings with Israel from Israel’s activities in the West Bank and East Jerusalem, which it has occupied since 1967.

European diplomats have long said that labeling — to make clear the goods originate in settlements — is only the first in a series of steps the EU could take against Israel over its settlements policy, one that in financial terms is expected to have a relatively minor impact on the Israeli economy.

But the new proposals would go much deeper and further, reaching into banking, loans and mortgages, qualifications earned in settlement institutions and the tax-exempt status of European charities that deal with Israeli settlements.

European Union officials have talked in private about the steps that might follow labeling, but there are no formal European Commission proposals in the works at this stage.

“Under its own regulations and principles, Europe cannot legally escape from its duty to differentiate between Israel and its activities in the occupied Palestinian territories,” says the report, titled ‘EU Differentiation and Israeli Settlements’…

In other words, Europe has a standard of pro-Palestinian bias written into its own laws?? Oh right…Eurabia.

No country does it better than France, the architect of this axis. Ynet news had this report earlier in the month:

There is something very despairing in the free world’s war against global jihad and the terrorism it produces. We should pay close attention particularly to France, a country that has turned into a terror victim and does not shy from making blunt statements about it, including a rare recognition that this is a “war of civilizations.” Normally, European leaders are afraid of even uttering this factual truth. Not in France, though. They stress there, and rightly so, that this isn’t a war against Muslims, but against jihad. And they don’t try to hide it.

This would be heartening… except that it is more dangerous to be a French Jew than it is to be a jihadist.

The problem is that France says one thing and does the complete opposite. The most important of the boats that attempted to reach the Gaza Strip this week was the Marianne. All of the useful idiots were on it. The boat sailed with the aid of the French NGO Platform for Palestine (Plateforme des ONG françaises pour la Palestine). Practically all of the organizations under this umbrella are a part of the BDS campaign against Israel.

This platform, as the umbrella organization, issued a call for boycott against Israel and led the campaign to pressure the French mobile company Orange to cut all ties with Israel. The problem is that this organization gets funding from the French government through the French Development Agency (AFD). Is this how you fight radicalization?

Gaza flotillas, as we’ve previously learned, are a result of instructions coming from the Hamas regime, which has been recognized as a terror organization by the European Union. The Hamas charter openly calls for the annihilation of Jews. And not just Jews. Hamas television also airs propaganda that says: “We must kill the Jews, we must kill the Christians, we must kill the Communists — every last one of them.”

Yes, that’s Hamas all right. Recognized as a terror organization in the EU (Norway is not in the EU so is free to openly support these killers), Hamas is also supported by Europe. But that’s the thing about hating Jews — it makes brain mush.

To fight terrorism, you have to also fight the ideology behind it. And you also have to fight the Useful Idiots Brigade, who has turned into terrorism’s propaganda wing. Except France is not fighting, it is funding. The NGO Monitor revealed the mechanism of transferring funds between the European Union and European countries to organizations that have turned into Hamas’ propaganda wing. France is funding the France-Palestine Solidarity Association (Association France Palestine Solidarité), which graduated from anti-Israeli rhetoric to completely anti-Semitic rhetoric. This is not the way to promote peace and understanding among the nations. This is how you aid racist incitement. […]

The author of this piece says he spent several weeks lecturing in the Antipodes. He was questioned about Operation Protective Edge (2014) and he answered head-on:

There was destruction there, innocent civilians were hurt, and it’s unfortunate that they were. Even the representatives of Breaking the Silence worldwide don’t always lie. There is no war that does not include violations or crimes. [my emphasis — D]

See the link for a timeline of events from that operation, and what led up to it. The U.S. should have such a straightforward view of the crucial importance of securing our own southern border. Especially from the mujahideen of the Islamic State currently infiltrating the country, not to mention Iran’s operatives.

But that would be a major inconvenience to those who allow “Sanctuary” cities to blossom. Remember that these so-called sanctuaries are operating in our country as de facto secessionist territories, though the MSM never mentions that — none of its jornolists have enough knowledge of the American Constitution to have noticed or cared. But then there seems to be one set of rules for the American South and another for the bastions of Democrat progressive ‘virtue.’ Other countries — Turkey being one — have no problem with building walls at their borders to prevent destabilization of their sovereignty. Turkey reserves unto itself the right to persecute and kill its own Kurds, thankyouverymuch.

Finally, the author, Ben Dror Yemini, discusses his meeting with staff at The Australian and their subsequent editorial on the U.N.’s report on Operation Protective Edge. I looked at the report from the U.N., but y’all know my opinion of that august institution. It doesn’t even belong on American soil. In my research, though, I did find an ummm… arresting report from an IDF soldier who took part in it. See “We Have Paid for Morality in Blood”. Indeed.

It has been called “the most anti-Semitic piece of propaganda ever.”

…the cartoon was not drawn by Europeans — it was conceived, drawn and paid for by Israelis, for Israelis, about Israelis.

One can only wonder how right wingers, of all people, have the gall to call critics of Israeli policies “self-hating Jews”.

UPDATE: The Samaria Settler Council is a non-profit, but most of its funds comes from the Samaria Regional Council, which is an elected local authority (confusing, I know). As Labor MK Stav Shaffir wrote to her followers on Saturday night, “In case you were wondering who was sponsoring that filth, the answer is: you” – some NIS 1.3 million of taxpayer money in the last year alone, according to Shaffir.

Since going online, the video has been lambasted by just about everyone, including settler leaders. Danny Dayan, one-time chair of Yesha Council and number one advocate for the settlement movement, stressed the Council does not represent him, while Naftali Bennett tried to place some distance between himself and the video, albeit obliquely.

This bit of insider baseball regarding Jews’ internecine wars is no doubt a cartoon too far. You have to be immersed in it to understand. However, it does reinforce the old ‘joke’ about the Jew stranded on a desert island who built TWO synagogues: one for himself, and a second one to serve as the one he wouldn’t be caught dead in.

That, in turn, reminds me of the Irish aphorism: God made whiskey to keep the Irish from taking over the world.

10 thoughts on “The Joooz and EU BDS”