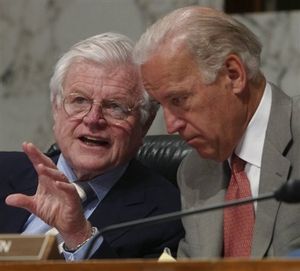 The following is a guest editorial from The Boston Herald, written by one of Boston’s radio show hosts.

Ann Corcoran featured it at Refugee Resettlement Watch, but it’s presented here in its entirety, for those of our readers who aren’t familiar with the man and his misdeeds. Ann notes:

By the way, Hyannis was never a preferred resettlement site, and, in 2014, Delaware got a big fat zero number of refugees.

[Hyannis being the base of the Kennedys, and Delaware the home of his immigration bill co-conspirator, Joe Biden.]

This angry essay gives you some understanding of the depth of many Americans’ disdain for Ted Kennedy. He did the most to tarnish the Kennedy legend, that huge myth his thuggish father worked so hard to build. If ever there was a “poor little rich boy” it was Teddy. Only he was also the evil little rich boy from his early years, including dishonor at college.

And so Mr. Howie Carr writes:

Every time another foreign terrorist murders Americans in cold blood, I think of Ted Kennedy.

It’s still unclear how this latest Middle East monster infiltrated the United States. But you can bet it involved his family taking advantage of one of Ted Kennedy’s “landmark” laws — the Immigration Reform Act of 1965, perhaps, or the Refugee Act of 1980.

Or maybe his father utilized one of the “terrorist visas” enshrined by the Immigration Act of 1990. That catastrophe, by the way, was signed into law by Juan Ellis Bush’s father, Bush 41.

Teddy’s fingerprints are all over each of these disastrous laws — as well as so many others.

These are Ted Kennedy’s words from 1965, when he was first promoting his plot to import the Third World here:

“First, our cities will not be flooded with a million immigrants annually … Secondly, the ethnic mix of this country will not be upset … Contrary to the charges in some quarters, (the bill) will not inundate America with immigrants from any one country or area.”

Will prisons be inundated, senator? According to the Bureau of Prisons, 24 percent of the inmates in federal penitentiaries are now non-citizens, and 16 percent are Mexicans. One man’s flood is another man’s leakage, right Deval Patrick?

Teddy’s brother Bobby likewise assured a skeptical Congress that passage of the “reform” act would not unduly burden the nation with indigent foreign terrorists.

RFK told a House committee in 1964 that in the first year 5,000 immigrants would be admitted from Asia, including Pakistan, “after which immigration from that source would virtually disappear … we do not expect that there would be any great influx after that.”

RFK didn’t live to see how terribly wrong he was. In 1968, RFK was gunned down by a Palestinian immigrant, Sirhan Sirhan, the first of the huge pack of “lone wolf” Arab assassins who have since terrorized the nation.

But the mounting slaughter never fazed Ted Kennedy. To realize his dream, he would say or do anything. In 1986, he demanded amnesty for another 1.6 million undocumented Democrats. So he told this whopper on the Senate floor:

“We will secure the borders henceforth. We will never again bring forward another amnesty bill like this.”

How about all these refugees and “asylees?” Like the Tsarnaevs — that crime family came over here on a tourist visa, then claimed they were victims of persecution from the government that granted them tourist visas. Once they got settled in on welfare in Cambridge, they became tourists once more, returning annually to vacation in Dagestan, where they were so grievously oppressed. Some persecution, huh?

According to the Office of Refugee Resettlement, Arabic has become the most common language among refugees. Among refugees from the Middle East, 91 percent are on welfare, collecting food stamps.

What could possibly go wrong?

The names all run together now, don’t they? Every week or two, the feds lug another Uzbek, or Pakistani, or Yemeni, or Syrian. And the news is always covered, or should I say covered up, the same way:

As Mark Steyn wrote, “These days whenever something goofy turns up on the news, chances are it involves some fellow named Mohammed.”

It took less than 24 hours to learn that this latest Mohammod had a “troubled background.” No doubt he was likewise an aspiring rapper, turning his life around.

Forty-six years ago this morning, the Chappaquiddick cover-up was beginning on Martha’s Vineyard. Some people think that was Teddy’s worst crime, but they’re wrong. It’s a standing joke that Teddy went through life, like Flounder in “Animal House,” fat, drunk and stupid. Maybe so, but he was sober enough to work tirelessly for the illegal aliens and terrorists who are turning the U.S. into a Third World flophouse.

In his final letter to the pope, Teddy said, “I’ve worked to welcome the immigrant.”

If only he’d worked as hard for his fellow citizens, starting with Mary Jo.

Ed Driscoll wrote an obit at the time of Kennedy’s death in 2009. But to get a real feel for the visceral hatred most Americans feel for this man and his “legacy” read the comment section at the link. People don’t forget the real villainies of the privileged.

America is becoming infamous for her traitors. Ted Kennedy ran in the front lines of that slavering wolf-pack.

7 thoughts on ““The Evil That Men Do Lives After Them…””