Yesterday’s posts about Swedish PEGIDA and the likely trial of Dan Park gave me the idea for the above variant on the Swedish flag. Maybe we could think up some mottos to go with it, such as:

“Sweden: A nation of recidivists!”

I’ll keep this flag handy for posts on the trial of Dan Park, or reports on new arrests by the Swedish Stasi, or other instances of Swedish “justice”. In the meantime, Swedes may feel free to borrow it for their own purposes. Maybe a Swedish-language version would be a good idea. 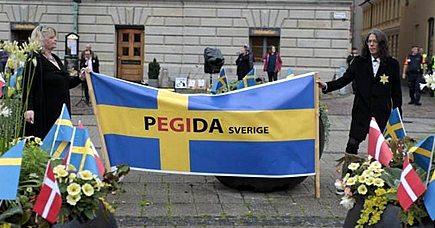 Other examples of iconography using the Swedish flag are below the jump.

4 thoughts on “Sweden is a Crime Scene”