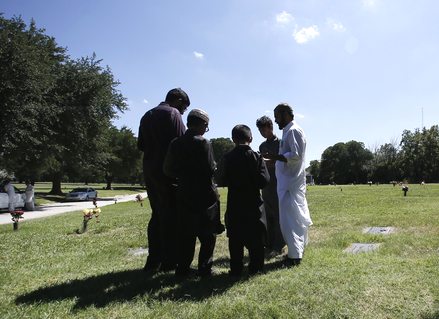 A town near Garland, Texas has learned enough about Islam’s way of life to go up in arms against the idea of a Muslim cemetery in their midst. Perhaps not just Garland, but the stories in Tennessee and other towns in Texas. Or even the ownership of the Taj Mahal, for heaven’s sake. Stick a deceased Muslim in the ground and the land belongs to Allah… or so says Islam.

From The Daily Mail, the most effective coverage of American news stories, was this:

Muslims say they’re looking for a place to bury their dead but locals in Farmersville say it’s a plot to gain a foothold in their small Texas town and are threatening to stop the plan by using pig parts.

A proposal to bring a Muslim cemetery to the rural town has stoked fears among residents who are vehemently trying to convince community leaders to block the project.

The sentiment reflects an anti-Muslim distrust that has been brewing over the last year in parts of Texas, most notably 25 miles away in Garland – the scene of a deadly May shooting outside a cartoon contest lampooning the Prophet Muhammad.

Muslim burial sites are eternal, just part of the ongoing war against the infidel.

Look at this controversy in England over Muslims and their dead territorial demands:

The subheadings give you enough of the story to see the similarities in this template of stealth takeover:

Notice they choose rural places for their plots. And the land is always outsized. The people of Farmersville are wise to catch on to the pattern so quickly. Perhaps “Islam” as a religion is damaged goods in this part of Texas after Garland. You don’t go shooting at people and expect them to honor your demands.

To get the real sentiments of local people, look at this report from the Farmersville paper in early July, with a sly bit of editorializing by the news writer. It’s worth reading the story in full:

The Planning and Zoning Commission originally approved a Concept Plan for a cemetery between CR 557 and West Audie Murphy Pkwy. during their May 28 meeting. This action was unanimous by the board, however members Todd Rolen and Bryce Thompson were not present at this meeting.

The developer is giving up, at great expense, land and dedicating it to the city of Farmersville for a future four lane divided dedicated road.

During the July 6 meeting a wide variety of concerns were expressed. The majority of those who spoke do not live within the city limits of Farmersville [note: but they live near enough to be affected by this decision or they’d not have shown up – D]

“They are not placed in any state statute or health code type burial,” Owen said. “State law requires that they (bodies) are to be put in something and also the maintenance of how cemeteries are to be kept.”

She also went on to say that Muslims were proud of the way their cemeteries look, in complete disrepair.

“There is also soil erosion in the cemetery which is a health issue,” she said.

“The Islamic faith bases their beliefs on the Koran. I have a copy in English right here and I just want to take a moment in my allotted time and read from it,” he said. “O ye who believe, take not Jews or Christians as friends. They are friends one to another.”

Meeks went on to say that in the Koran more than 100 times, there are references to murder, killing and even rape.

“Our history is full of Islamic problems,” Meeks said about Muslims in America. “They’re at war with us.”

Rebecca James who lives on property adjacent to where the proposed cemetery land shared concerns with the Planning and Zoning Commission.

“As a resident and a tax paying citizen it is appalling to me that we would even consider bringing this in to our community,” she said. “If we need to raise revenue for the city then we should do something else. I will do whatever I need to do to facilitate that stopping.”

“I would like to thank you for the prayer, because if this continues from all the research I have done, they will come in and attack you for that,” she said.

Kakaska also spoke about the Muslims indoctrination that will take place in Farmersville if the cemetery does go through.

“Use their battle against us, against them,” she said. “I do not want my child indoctrinated toward their religion. I do not want to be constantly in view of a mosque.”

Kakaska also spoke about additional possible acreage surrounding the proposed cemetery being available. There are 70 more acres they are trying to buy, she said, plus another 18 acres.

“Total – that is more than 120 acres. Do not tell me they are not trying to put a mosque there. We do not want this to be a Muslim dumping ground,” she said.

Kenneth Roose, who is an FISD school board member, brought forth numerous questions for the commission and eventually, city council, to answer regarding the proposed cemetery.

“I understand that the cities of Frisco, McKinney, Allen, and Plano had previously been approached for this same purpose and that those towns had the foresight and interest of their citizens in mind when declining access – that is voting ‘No,’” he said. “How does the construction of this Muslim Cemetery in any way benefit the citizens of Farmersville. There will be no taxes to collect, no profit for the city, and few if any Farmersville Muslims to bury. Follow the examples of Frisco, McKinney, Allen, and Plano. Quit worrying about lawsuits and do the right thing for the citizens of Farmersville and the residents of CR 557. Be advised that I will be organizing to fight this decision every step of the way.”

Since the proposed cemetery land is not in the Farmersville city limits, they fall in the Extraterritorial Jurisdiction (ETJ.)

These townspeople are well-informed. Notice one even brought a Koran to the meeting to make his point.

This kind of civic behavior is what puts Texans in a special place in the hearts of Southerners. They have “Don’t Tread on Me” down to a science.

Now if they could just get that border wall finished.

11 thoughts on “Muslims and Cemeteries: A Foot in the Door”