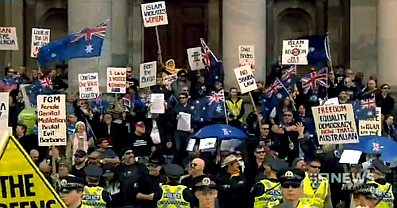 As we reported last night, Reclaim Australia and other “far-right” organizations staged an anti-Islamization demo in Melbourne yesterday. The demonstrators were violently attacked by “anti-racist” counter-demonstrators, and a massive police intervention was required to separate the two groups.

Additional demonstrations by Reclaim Australia occurred today in other Australian cities, with the same predictable response by leftist counter-demonstrators. Vlad Tepes has tracked down a series of videos of these demos, and also produced a short annotated clip with his own commentary.

I notice that the pattern is the same in the “anti-racist” reaction to these anti-Islamization demos as it is in Europe:

Below are some of the videos that Vlad turned up.

Vlad’s commentary on the lefties in Sydney:

15 thoughts on “More Street Action Down Under”