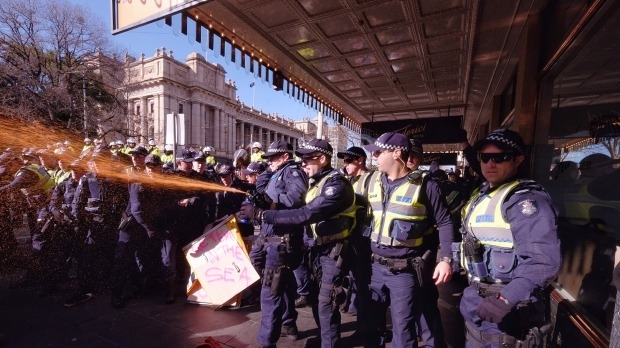 Anti-Islam demonstrators from Reclaim Australia and other groups who took to the streets of Melbourne today were greeted by “anti-racist” counter-demonstrators. Based on footage from the scene, the fighting got pretty vicious, and the police used pepper spray vigorously against the crowd.

See Vlad’s place for all the videos.

Below are excerpts from a 9News article about the day’s events:

More than 400 police officers were called to control violence that erupted in the Melbourne CBD today as anti-racism and anti-Islam groups clashed outside Parliament House.

The steps and streets around state parliament were blocked and police lines attempted to divide groups from the Coalition Against Racism and Fascism, and the extreme right-wing, anti-Islam Reclaim Australia.

Numbers grew as members of a splinter group known as the United Patriots Front joined their extreme right-wing allies.

“From a policing point of view, we can’t see the difference between the two sides,” Assistant Commissioner Stephen Leane said.

Coalition Against Racism and Fascism spokeswoman Vashti Kenway said anti-racism groups were mobilising to send a message that their rivals’ views were not acceptable.

“The clear message is that Melburnians aren’t going to stand for the kind of far right racist, sexist, homophobic attitudes that have really been embodied in both the United Patriots Front and Reclaim Australia, and that we’re prepared to take a stand in the city, that we’re prepared to say Melbourne is not the place for those kinds of attitudes,” she said.

Police were hindered by a number of violent protesters who used facial coverings to disguise their identity.

“It’s an indication that you’re not there to peacefully protest you are there to cause violence,” Deputy Premier James Merlino said.

20 thoughts on “Islam Critics vs. “Anti-Racists” on the Streets of Melbourne”