As I reported earlier today, the state prosecutor in Austria is investigating a possible hate speech charge against Geert Wilders, the leader of the Party for Freedom in the Netherlands.

Below is a brief report from the Austrian news service OTS. Many thanks to JLH for the translation:

After an Islam-hostile speech at an FPÖ event in the Hofburg, Justice finds suspicion of hate speech

Vienna: Vienna state’s attorney has initiated an investigation of Geert Wilders on account of hate speech. The basis for this is an Islam-hostile speech given in the Hofburg by the Netherlands’ right-populist on March 27th, at the invitation of the FPÖ leader, Heinz-Christian Strache. In the speech, Wilders described Europe as “at war with Islam,” compared the Koran with Hitler’s Mein Kampf, and called for banning it.

Tarafa Baghajati, leader of the “Initiative of Muslim Austrians,” subsequently entered a charge on suspicion of hate-speech, denigration of religious teachings and infringement of the prohibition law.[1] In his opinion, the state’s attorney did not properly proceed against Wilders and also Strache. There is no procedure against the FPÖ chief, who had listened “approvingly and with applause” to Wilders’ speech. There was, however, no evidence that Wilders had agreed beforehand with the FPÖ on the content of his speech. 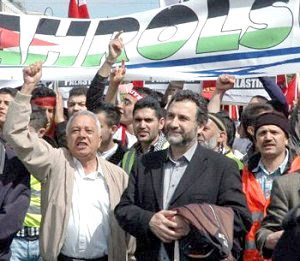 The Spokesperson for the state’s attorney, Nina Bussek, confirmed that an investigation is proceeding.

One thought on “From Austria: State’s Attorney Investigating Geert Wilders”