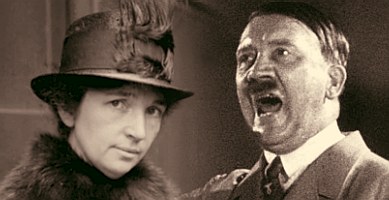 The following post grew out of a skype conversation between Vlad Tepes and me earlier today.

In our discussion of the scandal over little Princess Elizabeth’s Nazi salute, I mentioned Margaret Sanger, the great saint of Progressivism and admirer of Herr Hitler. Ms. Sanger, in fact, was even harsher in some of her views that Der Führer:

In 1923 Sanger called for the poor to be sterilised, the issuing of licences to those permitted to ‘breed’, and for the encouragement of ‘successful types’ to have children ((ED 10)). The following year Hitler called for the sick and those with hereditary disease to be prevented from having children, the limiting of ‘settlement certificates’ (for those moving to new territories) to the racially pure, and financial assistance to ‘healthy women’ so as to encourage them to have children ((AH 367-8)). Hitler’s attitude to the ‘mentally unhealthy and unworthy’ was kinder than that of Sanger. He wrote that education must teach ‘that it is no disgrace, but only a misfortune deserving of pity to be sick and weakly, . . .’ ((AH 368)). But Sanger taught that Eugenicists must steel themselves against feelings of pity and sentimentality ((ED 42, 62 and 64)). She labelled the poor as: ‘human weeds’ ((ED 15)).

And Margaret Sanger was not an anomaly for those times. She was fairly representative of Progressives in the 1930s. Everyone was a racist in those days. “Racial hygiene” was the big fad. Jews, Negroes, Chinamen — all were inferior. Eugenics was at the forefront, part of the avant garde. It wasn’t “conservative” or “right-wing”. Like Fascism and Nazism, it was progressive and modern, the wave of the future.

Then after 1945 collective amnesia set in. Hitler and racism and eugenics became “right-wing”.

Another fact that has been conveniently forgotten is that virtually everybody disliked Jews in the interwar period. Progressives, nationalists, monarchists, Communists, Nazis. Communists maybe less than some of the others, at least part of the time. Because so many Old Bolsheviks were Jews, until Stalin killed them off.

Social democracy was the polite non-violent alternative to Bolshevism. In the United States it was known as Progressivism. There was even a Progressive Party for a time.

Progressives were for “progress”, and that meant an historically inevitable purging of inferior strains of the human race. Progress was moving us inexorably towards a godless, racially pure, highly scientific future.

The Communists had their own variant on this ideology. Theirs involved world revolution and the destruction of inferior classes rather than races.

But it was basically the same thing: Exterminate the kulaks rather than exterminate the Jews and Negroes. The common theme was extermination — gradual or sudden, by violence or by sterilization — of people who collectively did not deserve to live.

That was the great gift of the 20th century to the history of mankind.

9 thoughts on “Extermination or Sterilization? The Gulag or Eugenics?”