Anne Marie Waters is the founder of Sharia Watch UK and a former UKIP candidate for Parliament. In the following guest-essay she describes the current assault on free speech, and her proposed response: to bring the Mohammed cartoons to London. 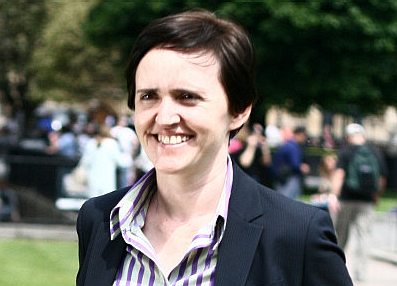 It’s Time to Take a Stand

We are in trouble, genuine trouble. Our language has been corrupted so that words no longer have meaning, reality is deliberately distorted, and our government and Parliament are now effectively enemies of the people. Decades of left-wing “education” has brought us here, and it is into a political and moral vacuum that Islam is advancing.

Let us take a look at ourselves. 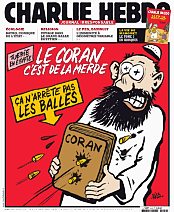 Back in January, a group of cartoonists were slaughtered. They were shot dead in their office. Their crime was to draw a cartoon of Islam’s prophet, and to not realise that Islam is now a power in France — and will dictate life there, increasingly, until the French wake up and take action. The aftermath of the murder of the Charlie Hebdo cartoonists was so significant that it will shape free expression for a generation. Our media didn’t show the cartoons, Charlie Hebdo was repeatedly called “racist” (even if it was, which it wasn’t, does that carry the death penalty now?), and the world tut-tutted about how inconsiderate we are of Muslim sensibilities. The word “provocation” was thrown around a lot.

What isn’t spoken about quite as often as “provocation” is the following: just after the killing of the cartoonists, a Jewish supermarket came under attack — and Jewish people were murdered. What was their “provocation”? Being Jews? The ones who bleat on endlessly about Muslim sensibilities rarely mention just what those Jews could’ve done to avoid causing offence to Muslims. Ah, but maybe there’s an answer to that — Jews are reportedly leaving France in huge numbers. Silly me.

Soon afterwards, in Copenhagen, friends of mine were shot at, and more people were slain, for getting together to talk about free speech. Lars Vilks, a Swedish artist who had once committed the crime of breaking Islamic law in the land of Sweden, was in attendance and a probable target. What happened? The world tut-tutted about how inconsiderate we are of Muslim sensibilities. As night follows day, a Jew was then murdered.

More recently, Pamela Geller — leader of the American Freedom Defense Imitative — held a cartoon contest in the land of the free. Her event came under attack by Muslims with guns. What happened? The world tut-tutted about how inconsiderate we are of Muslim sensitivities. No Jews were murdered on this occasion; however an attempt to murder Ms Geller soon followed.

And the world tut-tutted about how inconsiderate we are.

Some people are getting really tired of this, and I am one of them. We have a media elite, and governance, all over the Western world which doesn’t give a damn about us or our freedom. Journalists have no clue at all of the value of free expression, because they’ve been churned out by left-wing universities which despise the West and consider every other culture to be better than ours. They actively seek the destruction of Western society, and have found partner in jihad.

The looney-left “feelings” brigade have left us at the mercy of murderers — who are more important than us, and who we, for some reason, are supposed to respect. This is the state of our world in 2015. Islamic terrorists, oppressors, and killers are swarming our planet and our leaders are troubled about whether or not we offend them.

British born Muslims are heading off to join a group of barbarians who actively seek to destroy Britain, and our concern is for their well-being (and for some reason, we seem to want to bring them “home”). What on earth is happening to us? We are so terribly weak. And we are becoming enslaved.

As Pamela Geller so wonderfully put it, this is a showdown for freedom. We either stand up now or we will never recover — once our freedom is gone, it is gone.

To that end, I intend to make a stand, however small. I will organise an exhibition of Mohammed cartoons in Central London this September . I have a feeling I’ll get no support form our leaders, and our so-called journalists are already calling me “provocative”. But I am determined. When people are being butchered over cartoons, there is only one thing for it — more cartoons, and then even more cartoons after that.

If you can help in any way, please get in touch with me at amwaters@hotmail.com.