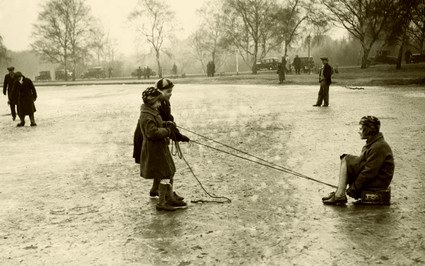 Here we are at the fifth day of the fundraiser, and this has been an eventful week so far. Yesterday I took care of the resource problem posed by our car — I spent most of the afternoon at the repair place, but the problem is fixed, and it didn’t break the bank, thank the Lord.

Then last night I got a nasty case of the trots (or, as they say in Bradford, “Mohammed’s Revenge”). That put me out of action for a while, but I woke up this morning feeling normal again, ready to get back in the traces.

For those who just arrived: this is the one week of the summer quarter when we grab our readers by the ankles, turn them upside down, and shake them until the change drops out of their pockets.

Contrary to what HOPE not hate, Imran Hussain, and the Grauniad might think, this blog is not funded by the Israeli government, or right-wing billionaires, or conservative think tanks. The wherewithal to keep it going — and to keep the electricity on and food in the fridge here at Schloss Bodissey — arrives in the form of modest donations from individual readers. So if you appreciate what we do here — and what Vlad does, because we give him a cut — please look for the tip cup on the sidebar of the main page and make it clink.

The theme of the current bleg is “Resources”, and this week’s whimsy of circumstance has provide ample food for thought on the topic. Not just the car, and the phone, and the internet connection, but the attempt by the Red-Green alliance of the British establishment to bring legal force to bear against us.

It made me think about the Soviet Union during the days of Stalin’s rule. As is now well-known, accurate information was generally hard to come by for the leadership of the U.S.S.R. The system they designed and built did not encourage or reward the propagation of accurate information. Quite the contrary, in fact: it encouraged the propagation of falsehoods, provided that they supported the Narrative. And the Narrative, of course, was dictated at any given moment by the Central Committee of the Politburo.

When Comrade Stalin requested, say, the latest statistics for iron ore production, it was not at all in the interests of the Commissar for Mineral Resources or his subordinates to provide figures that showed their output was well under the target set by the Five-Year Plan. They all knew that to do so would put them on the next train to the gulag, or get them dragged out of their beds in the middle of the night and shot. Thus there were enormous incentives at every level of the system for them to fudge production statistics and tell the Leader what he wished to hear. And if the managers of the tank factories were unable to acquire enough ore to meet their own quotas — why, that was their problem. Let them fudge their own statistics!

Such is the nature of totalitarian rule. Pursuit and dissemination of accurate information is not encouraged. The truth is not highly regarded. What matters is not what is true, but what reinforces the Narrative.

“But, Baron,” you say, “what does that have to do with Britain or America in 2015? We don’t live under totalitarian rule.”

Ah, well — that’s the interesting part. The oligarchs who rule us under a veneer of democratic choice have gone one better that Stalin: they have devised a system to keep their citizens under tight control without jackboots or neck-shots or slave labor camps. Control is exercised primarily through financial means. The system generates a level of wealth upon which ordinary people become dependent, so that its withdrawal is to be avoided by any means. The dreaded IRS and Inland Revenue, rather than the KGB and the Stasi, act as the enforcement arm of the system. Even when the authorities resort to legal action against dissidents, the purpose of the procedure is not to obtain a conviction — although that is always to be welcomed — but to impoverish the target. Just ask Geert Wilders how much his two acquittals cost him.

The threat of losing one’s job — or, in the case of media people, to lose one’s prominent and privileged position in the hierarchy of the Narrative-reinforcement industry — is usually enough to keep would-be dissenters in line. The guy who burned pages from the Koran at Ground Zero on the tenth anniversary of 9-11 was fired from his state job immediately by Governor Christie (a Republican, I might add). The fact that a court reinstated him later is neither here nor there — other state employees received the message, loud and clear: Islam is off-limits.

To coercive financial incentives are added the effects of the total surveillance state that has descended upon us over the last two decades. Everybody understands by now that there is no longer any such thing as a private conversation. Any electronic signal generated by a keyboard or spoken into a microphone must be assumed to have been recorded by government eavesdropping software and stored an enormous database, where it can be retrieved later when needed. People’s movements are tracked and passed on by the GPS devices in their cell phones. Their retinas and license plates are scanned. Their faces are recognized by electronic devices in public places. There is no longer any hope of escaping the ever-present scrutiny of the State.

Meanwhile, the ascendancy of Cultural Marxism has exterminated the last vestiges of the Christian religion from our public institutions. When God departed, so did any belief in objective truth or moral goodness. It no longer matters what is true or good — Truth and Goodness are atavisms, to be cast upon the dung heap of history. They have been replaced by the Narrative, which is arbitrary and mutable. It is adapted whenever necessary to serve the purposes of those who wield power over us.

Anything that does not serve the Narrative must be firmly discouraged, and ruthlessly suppressed when required. Messages on all screens must conform with and reinforce it. No one who wants to live well and be well-thought of will deviate from the Narrative.

The confluence of all these trends means that public opinion is now hard to track. The post-modern savants who rule us have decreed what our opinions should be, and woe betide anyone who strays off the permitted track. Why would anyone dare to tell the truth about his opinions to a pollster over a telephone line? Every citizen knows that when he exercises his democratic franchise, the government has an electronic record of his vote, and may well have matched it with a facial scan, even in the privacy of the voting booth. You’d better vote for the right candidate! But don’t worry — the screens will tell you who that is.

That’s why it’s not a good idea to trust the polls on, say, gay marriage. The talking heads on the screens have made it clear what the correct opinion is, and provided numerous examples of what happens to those who are unfortunate or foolish enough to express their dissent.

As a result, the political and cultural mandarins who control our lives now face the same dilemma that Stalin did in 1943: they are operating with a dearth of accurate information, only this time the missing data concern the true opinions, preferences, and sentiments of the serfs they rule, rather than agricultural or industrial production. Their system discourages truth and promotes the Lie, so the Lie is what is returned to it. Based on the latest polls, they probably assume that everything is on track for the bright dawn of the New World Order.

But they may be in for a surprise. By suppressing and controlling opinion as much as possible, they have created the ideal conditions for emergent change. Despite the effort to devise perfect control mechanisms, the system remains complex, chaotic, stochastic, and unpredictable. It will continue to function in what seems to be a state of equilibrium, but all the while the suppressed impulses for change are emerging and gathering unseen beneath the surface. They cannot be easily detected or measured, because an unintended consequence of the system’s design is the inability to measure authentic popular sentiment.

I have often compared the current sociopolitical situation to the formation of ice on the surface of a pond. As the temperature drops overnight, the pond remains liquid. Invisible internal currents distribute the change of temperature evenly through the water as it approaches the freezing point. Then an ice crystal is seeded on a reed or floating stick, and suddenly frozen zigzags are spreading rapidly across the surface. In little more than the blink of an eye it becomes a solid sheet, and by dawn wild animals are walking across it.

This, then, is the time we find ourselves in. An emergent change of state is imminent and inevitable. However, a (mathematically) chaotic system is by nature unpredictable. As Jesus said, “Therefore stay awake, because you do not know the day or the hour.” (Matthew 25:13)

And better clean the rust off your ice skates — they’ll be your most important resource.

Yesterday’s resource-enhancement arrived from these places:

Many thanks to everyone who contributed! We’ll have more tomorrow.

8 thoughts on “An Emergent Change of State”