On Tuesday an Egyptian court will make public the decision by the Grand Mufti of Cairo concerning the death penalty imposed on former President Mohamed Morsi and other members of the Muslim Brotherhood. Ashraf Ramelah’s latest essay examines the significance of the possible outcomes resulting from the Mufti’s decision. 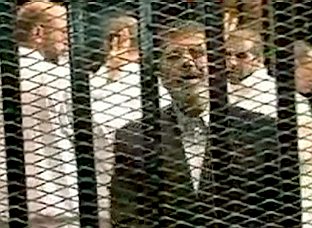 Will the Sharia save Morsi?
by Ashraf Ramelah

There are more than one hundred names on the list with him who are all convicted of the same crimes: murdering protesters, transferring top secret military documents to foreign countries, and burning the museum library which destroyed rare manuscripts and ancient artifacts.

As required by Egyptian law, the Egyptian court directly transmitted the list of the sentenced to the Grand Mufti of Cairo for his pronouncement of the Sharia opinion (approval) on the court’s verdict and sentencing. This past week, a few hours before the court resumed on June 2, a sealed envelope was passed to the court containing the Grand Mufti’s decision.

The court postponed the June 2 proceedings until June 16, and the envelope remains sealed at this moment. Some say the court did so to protect the country and President Al-Sisi who was in Germany on June 2 — waiting for his return in case violence erupts as a result of the announcement.

What are the chances that the Mufti has approved the death penalty? After all, the hundred or so Morsi aides and accomplices condemned to death along with the former president are guilty of nothing more than consistency with the cleric’s ideological and religious views.

If the death penalty is not approved and the civil court ignores the disapproval and goes forward to implement the death penalty, this could mean that the court is secured by the backing and protection of the President in order to serve justice. This in turn reveals that Al-Sisi is truly willing and able to go forward with cleaning corruption and rolling back religious extremism in an effort to reform the country.

But Al-Sisi is a mystery. He recently gave a statement to the German press indicating his agreement with the official story of Egypt’s Muslim Brotherhood wherein Morsi was elected fairly and democratically and won with 55 percent of the vote. This is very odd, since Al-Sisi’s own legitimacy as the people’s president rests on the opposite view — the well-known truth that Morsi became president through corrupt elections, violence, fraud, and outside interference.

The second alternative would be for the civil court to comply with the Grand Mufti’s disapproval of the death sentences, subjecting itself to the authority of the religious clerics which is current practice. In an unreformed Egypt this can be expected from the court.

If we find that the Mufti has approved the death sentences, we are experiencing Al- Sisi’s power for the first time within his term of office and know as well that he is genuine. If so, the promise of modern reform has real potential, and Al-Sisi will have succeeded in spite of outside pressures (Merkel, Obama, and the CIA), Egypt’s political legacy (Mubarak, Sadat, and Nasser) and religious ultra-conservatives threatening secular initiatives (Salafists, Muslim Brotherhood and Al-Azhar Institute).

The Coptic minority remains under the same pressures today as during previous administrations ruling Egypt. Muslim supremacies prevail, often with violence, against the sub-class within Egypt’s population. Al-Sisi, the man and the president, is yet a sign of hope for the country – Muslim and Christian watch Al-Sisi teetering between positions usually by omissions but not defaulting to the comfortable pattern of his predecessors.

4 thoughts on “Will the Sharia save Morsi?”