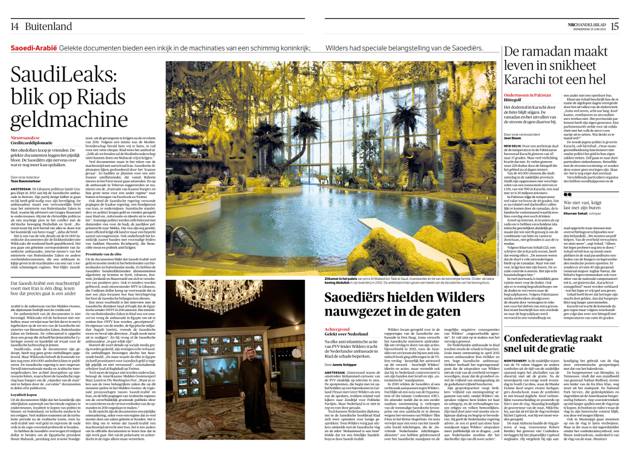 The following notice just came in from the PVV:

This week, Wikileaks published a number of documents from the Saudi Ministry of Foreign Affairs. The documents reveal that the Saudi embassy in The Hague keeps a close eye on the Dutch MP Geert Wilders, leader of the Party for Freedom (PVV).

A document from the Organization of the Islamic Conference (OIC) also reveals that, in 2010, the Saudi authorities were planning to bring Geert Wilders to court. Permission to do so had already been obtained from the then Saudi Crown Prince.

Below are the parliamentary questions of the PVV and the translation of an article, published today (June 25, 2015) in the Dutch newspaper NRC-Handelsblad.

Questions by Mr Wilders and Mr De Roon (both PVV) to the Minister of Foreign Affairs:

Last night, the controversial Muhammad cartoons of the PVV were finally shown on television. The cartoons, which early May led to commotion at a meeting in Garland (Texas) where Geert Wilders was one of the speakers, attracted a relatively large number of viewers for the broadcast of a political party. But they have not led to disturbances in the Netherlands.

Nevertheless, Dutch diplomats in the Saudi capital Riyadh can again brace themselves for difficult conversations. When, last year, Wilders distributed stickers with the Saudi flag and the text “Muhammad is a crook”, this led to a de facto trade boycott by Saudi Arabia.

Wilders regularly figures in reports of the Saudi embassy in The Hague. Sometimes, the Saudi Ministry explicitly requests reports about his actions: for example, in 2012, when the Saudis had heard that he was about launch an anti-Islamic book in the US. A report — obviously the answer to this request — describes Wilders’ opinions and actions. It also mentions that he is controversial in the Netherlands for his links with Israel and his “extremist” views.

According to a document of the Organization of the Islamic Conference (OIC), in 2010, the Saudis wanted to bring Wilders to court. The document reports that, at an earlier stage, approval had been obtained from the then Saudi Crown Prince to press charges against Wilders for showing his movie Fitna in the British House of Lords. The document refers to a document from the Saudi intelligence chief, who is said to have informed “friendly Dutch intelligence services” about the Saudi view and the possible negative consequences of Wilders’ “unlawful aggression”. It is not clear what happened next.

The Dutch embassy in Riyadh always tries to limit the damage. When Dutch Ambassador Ron Strikker met a high ranking Saudi official in April 2012, he reiterated the government’s position that Wilders’ statements do not represent the government views, but that the Dutch Constitution guarantees both freedom of expression and freedom of religion.

His interlocutor rejected Strikker’s “freedom of speech” argument, because, according to him, Wilders’ statements lead to hatred and lack of understanding, and complicate the relations between religions and peoples. His country, however, is making huge efforts to promote religious dialogue and understanding. He gives the Dutch government the advice speak out in public against Wilders’ statements, “also towards Dutch Muslims who are the victims of this kind of actions.”