Last Saturday thousands of people gathered for an anti-immigration rally in downtown Bratislava, the capital of Slovakia. Our Czech correspondent Gemini took a field trip to his eastern neighbor to see the rally, and sends the following report. 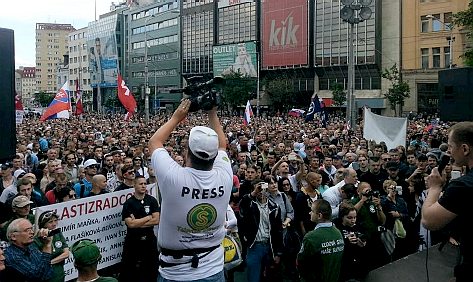 Report from Bratislava
by Gemini

It is very hard to write everything about the rally that took place on Saturday. However, I witnessed it and here is what I found most important to report: 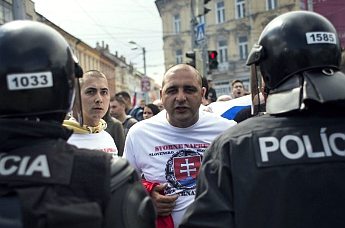 It is hard to say yet what the future will bring for Slovakia. 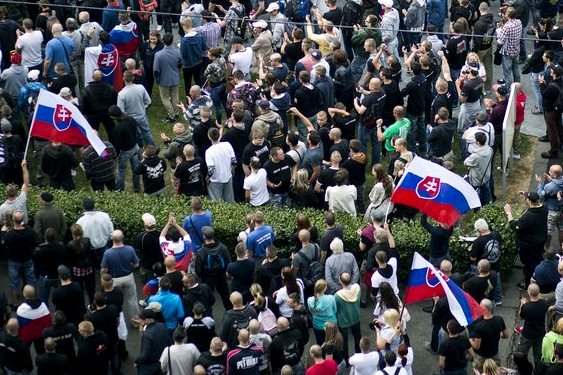 BRATISLAVA, Slovakia – Thousands of people have rallied in Bratislava against what they call an “Islamization of Europe” and to oppose a European Union plan for member states to share the burden of hosting a surge of asylum-seekers.

Police say some 300 protesters attacked spectators of a cycle race and clashed with police later Saturday. The City Downhill World Tour Bratislava 2015 race had to be interrupted.

The protesters condemned an EU plan to divide up refugees arriving largely in Italy and Greece between member states.

Slovakia is expected to accept 785, although the government opposes it.

Thousands rally against immigration in Bratislava

Thousands of people protested against immigration and EU quotas on migrant numbers at a rally organised by an anti-Islam movement in Bratislava on Saturday.

The rally organised by a group called Stop the Islamisation of Europe drew up to 8,000 people, according to Slovakian media, while the police declined to give an estimate.

Protesters included Marian Kotleba, the governor of a central Slovakian region and founder of the far-right People’s Party Our Slovakia.

“I wish you a nice, white day… we are here to save Slovakia,” Kotleba told the crowd.

The protest was called after the European Commission said in May that Slovakia, an EU and NATO member of 5.4 million people, should accept 471 migrants from Italy and 314 from Greece.

One of the protesters was taken into custody after using tear gas against the police, and the crowd also shredded the blue EU flag offered by one of the speakers.

Riot police also stepped in to separate the protesters from about 200 people planning to block the rally.

Hat tips for the English-language articles: Fjordman and C. Cantoni.

11 thoughts on “Report from Bratislava”