Our Indian correspondent the Kafir returns with an essay on the parallels between Pamela Geller and a woman whom Mohammed ordered assassinated. 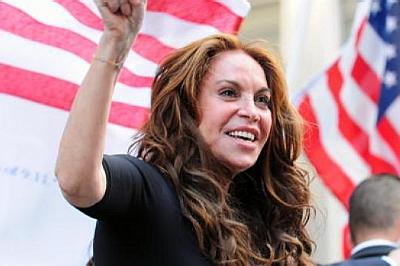 Asma bint Marwan did not travel to Mecca to lampoon Mohammed. She might not have even heard of him before he took shelter in her city. She was happily living her life among her own people, in her own city. When she was murdered by one of the Muslims at the behest of Mohammed, already nineteen months had passed since Mohammed came to Medina seeking asylum, and Asma had not bothered about him.

Medinans had given Mohammed asylum, and used to accept mediation from him, because they thought he was a man of God.

But soon he started his reign of terror. First against the Meccans who had driven him out of that city for lampooning their religion. And soon against everybody who raised their voices against him.

Abu Afak, a Medinan, a man over a hundred year old, could see what was coming to the Medinans, and tried to warn them. Mohammed immediately ordered his assassination, and his orders were carried out.

It was after Abu Afak was murdered that Asma bint Marwan became alarmed and challenged her tribe, asking how they could obey a man who was killing their chiefs. How could they let him live among them?

Her words reached Mohammed, and as usual he ordered her assassination as well. The deed was carried out by a man of her own tribe, in the night, as she slept with a suckling child at her breast. The man went to Mohammed next day early morning, offered prayers, and told Mohammed of his deed. Mohammed said, “You have helped God and His apostle, O ’Umayr!”

As if God indeed needed murder of a woman.

Mohammed also assured the killer that there wouldn’t be any consequences.

Encouraged, Umayr, the killer, went to her house and mocked her five sons.

The next day her whole tribe, Khatma, impressed with the power of Islam, converted to Islam. Islam learnt the lesson it has not forgotten: that violence works, and that violence works wonders for Islam. That violence breaks resistance to it, and kafirs quietly submit to violence. All of this happened in the year 624AD.*

Pamela Geller is a quintessential American woman, leading a life of quietness in her fantastic country. I doubt she ever travelled to any Muslim country to bother them or say anything about their religion.

Then on one sunny morning in September of 2001, over 3000 of her countrymen are murdered in most brutal a fashion.

She takes to writing and blogging with the passion of person who loves her country, and wants to preserve it with all its Freedoms. Threats start coming her way, but she refuses to submit.

And now an open order to kill her has been pronounced by the successors of Mohammed, the Islamic State.

The parallels with Asma are striking.

I only hope and pray to God that the parallels stop here. That Pamela Geller lives to see the world finally fully cured of the cancer called Islam.

Because if she gets assassinated like Asma, what will stop other parallels from coming to fruition? Will violence and terror not have the same effect on Americans that they had on Asma’s people, who on the second day after her assassination all converted to Islam, impressed with its power to have poetesses assassinated?

After all, if Americans so far have submitted a little more after every act of terror from Muslims, why should we think that they will not follow the balance of the script. And, after Pamela is assassinated, God forbid, won’t all convert to Islam en masse, just as Asma’s people, the Khatmas of Medina of 624AD, did?

Islam’s policy of murdering without fail everybody who gets out of line is bringing it rich dividends. As in the novel 1984 by George Orwell, rebellion against or resistance to Islam is impossible, because every voice that tries to warn or organise people against it is immediately silenced through assassination. In the case of 1984, the remaining people were under the jackboot of Big Brother, so every murder of persons guilty of rebellion or Thoughtcrime went unchallenged. But in case of Islam, even the people who are not yet under its yoke are not ready to learn anything, are not ready to act against it when they can. They are in fact busy convincing their warners to keep quiet, not to disturb the “beast,” because once the “beast” is disturbed, it doesn’t go back to sleep without human sacrifice.

America is not an ordinary country. It is the only country that is standing between the world on the one hand; and Islam, the Left, the Environmentalists, the tyrants of various stripes, and the evil of every kind on the other.

It will be the greatest catastrophe if the men whose fathers put a man on the Moon behave like Khatmas and submit to violence. Because although the media and the politicians may put any spin on their abject crawl, in reality they are submitting to violence from a murderous cult frozen in 7th-century Arabia.

If America is not able to find an antidote to the Islam’s policy of assassinating every voice raised against it — which makes organised resistance against it impossible — no other entity will, and world will return to 7th century Arabia, and will freeze there till the Sun runs out of hydrogen.

If America, the last best hope, does not find an antidote to the low-level, random, but unceasing violence of Islam, we are all doomed to a most painful and brutal annihilation.

Are we going to surrender the world to the 7th barbarians, just because they never gave up violence, and we became civilised?

Is civilisation a suicide pact?