JLH normally spends his time translating German texts for us. However, yesterday’s Supreme Court decision prompted him to take a break from the umlauts and eszetts to pen this poetic pastiche in the spirit of Charles Dodgson. 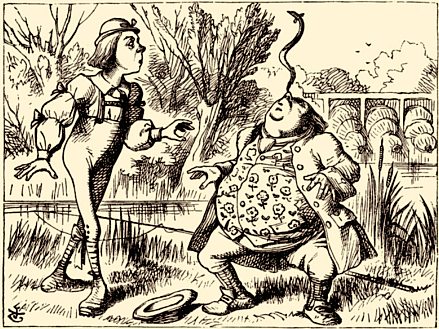 (with apologies to Lewis Carroll)

“You are Left, Your Honor,” the young man said,
“And your thinking is not very bright.
You ceaselessly stand the Law on its head.
Do you think what you’re doing is right?”

“In my youth,” said the Justice Supreme, “my son,
“I feared it might injure the Law.
But now that I’ve learned that there really is none,
I don’t care which way it might yaw.”

“You are Left,” said the youth, “as I mentioned just now,
And have grown quite mentally lazy,
Yet insist that the Law do a Triple Salchow —
A thought that is palpably crazy.”

“In my youth,” the Justice Supreme then replied.
“I tried to keep on thinking.
But then I discovered this socialist bromide
Which I think everyone should be drinking.”

“You are Left,” said the youth, “and your mind is too weak
To delve deeper than The Washington Post.
Yet you give the Law and Constitution a tweak,
And instead of hiding, you boast.”

“In my youth,” said the judge, “I studied the law,
And argued each case with my cat.
What I learned from how he would wave his left paw,
Has formed my decisions since that.”

“You are Left,” said the youth, “And it’s hard to take in,
That your perception has not been affected
Yet you found the angels on the head of a pin
That famous attorneys neglected.”

“I have brilliantly answered your questions ’til now.
Your questions are lèse majesté.
Don’t try to interpret; you wouldn’t know how.
Leftism is now here to stay!”