MC’s latest essay looks beyond the Holocaust to consider the other programs of mass murder during the 20th century, and the general tendency of socialism to engineer slaughter on an industrial scale. 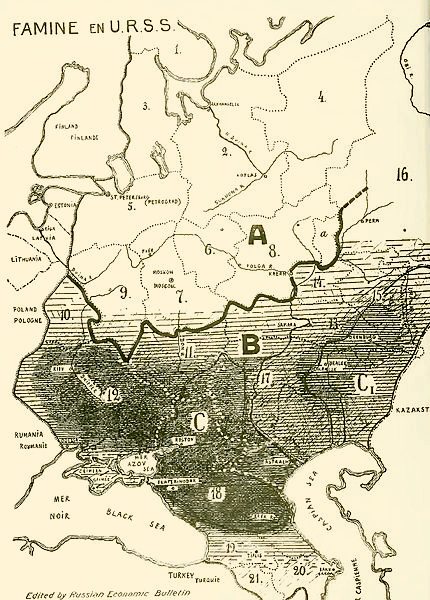 Famine in the USSR, 1933. Areas of most disastrous famine are marked with black. Explanation of symbols on the map:

And Just Who are the Useless Eaters?

The killing did not start immediately. The Nazis came to power in 1933 and the world watched in awe as they imposed a new kind of socialism on Germany. The world had watched Marx-Leninism from 1917, and had viewed the killing sprees of the Bolsheviks in much the same detached way as we read about Boko Haram murders and kidnappers in Nigeria. “Bring back our girls” or else…

It was a very insubstantial ‘else’. As in all things, the red line is elastic.

The ‘good men’ of the Administration had other priorities.

The actual killings started in earnest some five years later, with the extermination of ‘useless eaters’ in the true socialist pattern. This idea had been kicked around in the discussions of Fabians and Liberal/socialist/progressive groups since their foundation. The National Socialists in Germany went ahead and started a practical process of elimination of the eugenically challenged in gas chambers and by fatal injection, just as suggested by the Fabian leader George Bernard Shaw.

Murder has never presented much of a problem to humanity. The much greater problem has been the disposal of the corpses in such a way as to keep the murders below the horizons of perception and without endangering the health of the murderer. The bigger the murder, the bigger the logistics problem posed. The Srebrenica massacre has a huge credibility issue; there should be the remains of 7,000 bodies which have yet to be found. Serbia was bombed based on satellite photographs of the victims in a field, who disappeared and were assumed to have been murdered. 400 or so bodies of fighters killed in the battle for the city were found, but where are the 7000?

In any real massacre there are always survivors, even at Babi Yar a young woman was able to climb out of the ravine. So the ‘useless eaters’ theory goes: the tough, the intelligent (and the lucky) will survive. These are the beliefs of the Georgia Guide Stone edicts.

The definition of a ‘useless eater’ is vague, Felix Dzerzhinsky of Cheka fame regarded humanity as little better than cattle, and was thus able to slaughter people without remorse. His was an extreme but not uncommon view.

The theory of the ‘useless eater’ is this: If one creates chaos and mayhem, then those who survive will be the cream, those worthy of life. The agencies of survival being strength, intelligence/cunning and luck. The elites who are manipulating things see themselves as the epitome of this credo, and have thus earned the right to launch this genocidal mayhem upon the rest of us.

It looks as if the first tremors are beginning now, and the beginning of the eruption is likely to be the debt implosion. We, as societies, are in so much debt, both personal and national that we can never pay it off. If interest rates were to rise just a few percent then many, many people would find themselves in a default situation. The real question here being: What will the consequences be?

Will the debts be written off? I doubt it; the consequence will be some sort of debt slavery. It will not be called that, of course, but people will become ‘property’ of some sort. Much like the communist doctrines of the kolkhoz (collective farm), ‘to each according to his needs’ is most wonderfully fuzzy and capable of gross manipulation. In many ways the Holodomor outstrips even the Holocaust in terms of sheer bestiality and numbers*. The map at the top of this post is significant: the ‘famine’ was only in the grain-PRODUCING areas.

The idea that each individual life matters is intrinsic to Judeo-Christianity and is very much embedded in Western culture. Take away the Judeo-Christian element, and we are left with a hotch-potch of competing and conflicting value systems, of which only the most ruthless will survive.

So, we look around ourselves at the realities. I am sitting at my computer writing in a small town in Slovakia about 25 kilometers from the capital Bratislava. For me it is Shabbat, but next door is the local produce market, it is colourful, and somebody is playing traditional music on an accordion. Life has been little changed for many years (no immigration problems here).

In two weeks’ time I will return to Sderot, where war is once more brewing. I may go to UK for a week to see my grandchildren in the meantime. But If I do go to UK I will not be able to transmit any writing I do because I must assume that I will be monitored, and might endanger my son’s family by committing ‘hate’ crimes from his house.

The England I grew up in is now unrecognisable. There would be no produce market where I could get a large bag of cherries from a tree in someone’s garden for 40 cents, and the (unlicensed) accordion would not be appropriate either. The communities of the UK have been diluted and broken up over the 60 or so years of my lifetime.

At the heart of this breakup is the idea of welfare, where communal responsibility is removed from the community and centralized into a remote bureaucracy. Thus I no longer rely on my neighbours for mutual support, or for those non-physical benefits with which a community ‘spirit’ endows us, especially the feeling of belonging. England is now full of isolated individuals who can no longer identify with their circumstances. And that includes me.

One day I was ordered to drive my truck out of town. I had a Ukrainian with me. It was about 10 a.m. On our way, we passed Jews marching in columns in the same direction, we were going. They were carrying their belongings. There were whole families. The farther we drove away from the town, the more people we saw in the columns. There were piles of clothes in a wide open field. My job was to fetch them…

They were supposed to put all their belongings together in a pile. Everything happened very quickly, the Ukrainians hurried those who hesitated by kicking and pushing them. I think it took less than a minute from the moment a person took off his coat before he was standing completely naked.

No distinction was made between men, women and children. The Jews who were arriving could have turned back when they saw those who had come earlier taking off their clothes. Even today I cannot understand why they didn’t run.” [emphasis added]

Now I can understand why they did not run, after 100 years of total cultural erosion: after Czarist pogroms, Stalinist famines and Nazi predations they were culturally isolated and their communal identity destroyed. They were ‘useless eaters’ unable to justify their existence to the ruling Nazi elite.

They make cars cheaper in Nanking and Shanghai, more cheaply than in Detroit, so the people of Detroit are now ‘useless eaters’, and for Detroit read Baltimore, Cleveland and Ferguson. So where next?

The truth is that Black lives don’t matter, and White lives don’t matter either. What matters is that the ‘useless eaters’ are eliminated, but without threat to the elite itself. It’s that problem of corpse-disposal again, but if one can create the conditions where more ‘Blacks’ die than are born, then the black community dies too. So enter Planned Parenthood to facilitate exactly that. It seems that more black babies are aborted than actually live. Black lives do not always matter, apparently.

So who are the useless eaters?

The answer seems to be that they are anybody who can be killed without a comeback. There are now no individuals, and murder is a matter of moral relativity and social Darwinism. And then there are those four-man coffins. They effectively solve the corpse problem, so who are they for?

26 thoughts on “And Just Who are the Useless Eaters?”