JLH has translated an essay about “Islamophobia” and “Orientalism” from the German weekly Die Zeit. It was written more than a week before the terror attack in Garland, Texas, but is uncannily relevant to last weekend’s events — and to the cordon sanitaire that has been put in place around Robert Spencer and Pamela Geller in the days since then.

At one time, critiquing religion was the foremost Marxist virtue. But the Western Left has nothing to say about the religious terror of Islamic fundamentalism.

In November 2014 the American filmmaker Ami Horowitz ventured an experiment. He stood on the campus at Berkeley — point of origin of the US Left — waving an IS banner. As he did that, he called out that the IS wanted peace and was merely defending itself against the aggression of the West. From the students came friendly nods and encouragement: “Thumbs up!” Only one criticism — to please not smoke on campus. Shortly afterward, he did the same thing with an Israeli flag, using the same mottos: Israel wanted peace and was only defending itself against attacks. He was answered with considerable aggression.

To be sure, Horowitz is a known polemicist. His works appear on neocon Fox News. His artistic model is Michael Moore, and that does not exactly obligate him to be objective. No doubt he has cut the material to fit his own purposes. And yet the students’ actions are authentic. Worse yet, they were to be expected.

Another example shows that this ignorance is not just an American problem. One month before Horowitz’ performance, the British umbrella organization of student groups, the National Union of Students, refused to condemn the terror militia IS. Reason: This could encourage ‘Islamophobia.” The distinctly progressive group’s decision was communicated by a young woman covered in conservative Islamic fashion. Participation in any commemoration of the Holocaust (and other genocides) was also rejected as “Eurocentric.” The British political science professor Alan Johnson wrote that the Left is no longer capable of distinguishing between fascism and anti-fascism.

This confusion also begets reactions to the shootings in Paris. Although the jihadists targeted Jews for murder, nothing is said on the left about anti-Semitism, but there are warnings against “Islamophobia”. Out of the fear of reproducing a “colonial paradigm,” there is hardly any criticism of Islamism.

It is hardly possible to write about this blind spot in today’s left, without naming the author who essentially formed its discourse on this subject: the Palestinian literary theoretician, Edward W. Said (d. 2003). After its appearance in 1978, his book Orientalism achieved a significance for the 68ers equal to Frantz Fanon’s The Damned of this Earth. Closely aligned to Michel Foucault, the Harvard- and Yale-educated Said revealed the various discursive elements with which the West had formed “the Orient” as its artifact. The goal of the West was the distinguishing of the Orient as the “cultural counterpart” of Europe, in order to justify colonialism. Beginning with Napoleon’s military campaign, Europe had produced “expanded and refined techniques of absorption,” the primary one being study of the Orient. Its description of those colonized, Said complained, “consistently corresponded more to the originating culture than to the purported result produced by the West.” For Said, the orientalist was at best a “hostile scout” and the “Orient” was a discursive creation of the colonial powers and the USA. This “Orientalism,” he said, was more powerful than the economic, military superiority of the West and had helped the West to form its own identity.

Said’s book was brilliantly written and extremely effective. With “Post-Colonial Studies,” it founded an entire new school, which resonated widely in higher education. The Western Left, especially, internalized Said’s theorems in solidarity with economically backward areas of the world. Many of the questions posed by Said were and are contemporary, and yet, today, Orientalism reads like something from another time.

Today, political Islam consciously presents a tableau of contents which would have had to be judged “orientalist” by Said himself. Islamic propaganda, however — with its demonization of Western modernity and secularism, as well as its demonstrative atrocities — does not stem from any Western attribution. It is the product of its own discourse on the construction of an Islamic self at the cost of the “others.” It is no longer travelogues and geo-strategic dossiers from foreign ministries which foist on the world the “stereotypical oriental depictions” and “standardized templates” that had caused Said so much pain. It is the Islamists themselves, who have proudly chosen an identity composed of humanistic nightmares.

As Said lamented in various ways, his Orientalism thesis “was interpreted in the Arab world as a systematic justification of Islam and Arabs.” The author struggled against such usurpations, but was too much a prisoner of the Arabic — especially the Palestinian — narrative, to effectively combat it. His origins in a Christian family did not immunize him against an equating of Orient and Islam. And so, his criticism of Western discourse became an “identity” weapon against “the West.” It has contributed to the fact that many Arabic and Western intellectuals in the universe of Post-Colonial Studies are now hardly capable of confronting the Islamist challenge.

And then, it was even possible to read Said subversively. His formulation that “Orientalism is a constituent and not merely a casual element of modern political-intellectual culture — and as such has less to do with the Orient itself than with ‘our’ world,” in turn invites the question of what inner deficits are actually indicated by the hatred of Islamists for “the West.” No one hit upon the idea of using Said’s methodology to analyze rampant Muslim anti-Semitism or the conspiracy theory-rife rhetoric of Middle Eastern regimes (into which Said himself now and then slips). Here is a statement that says nothing about the subject and everything about the speaker. The growing influence of fundamentalist interpretations of Islam (including its own colonizing tradition) should have long ago been investigated with reference to images of self and other. What do the rigid and pervasive sexual morality and the commandment of female covering say about Islamism and its proponents? What do its authoritarian order and grotesquely distorted representations of Western societies tell us?

Above all, the omnipresent argument of wounded religious feelings is itself a product of Orientalism. The appropriate Islamist recruiting videos do not present the jihadists as sensitive souls. These productions are shaped by a desire to style themselves as breaking with the conventions of civilization. You have representatives of equal rights? We sell slaves! You believe in the unseen hand of the economy? We’ll just chop it off! Against this background, the idea that a few drawings could insult these people is naïve. 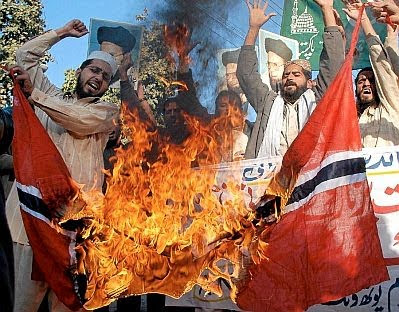 In fact, the “scandals” of the recent past are not spontaneous upsurges of feeling, but a means of expressing cultural entitlement, as per Said’s own description. The case of Salman Rushdie or the first Muhammad cartoons became of interest to Muslims worldwide only when Islamic states and organizations began to orchestrate protests. The easily excitable masses, like the unpredictable terrorist threat, are political leverage both internally and externally. These applications of pressure operate in service of the orientalist cliché that Muslims function beyond political interests and require special consideration.

This role-playing has long since been carried to absurd lengths by the originally critical claim of Postcolonial Studies and its leftist devotees. Once upon a time, religious criticism was one of the most respectable virtues of the left. The entire Marxist alienation doctrine depends on the transfer of religious criticism to the realm of the economy. But there is now not even a shadow of the 19th-century polemics on religion as the “spirit of a mindless age.” And it is more needed now than ever.