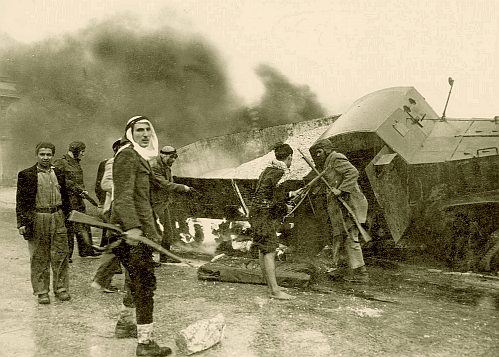 It’s that Bow Again
by MC

The establishment of the Jewish State of Israel in 1948 was a huge shock for those religious groups who justified their existence by the belief that their group became ‘god’s’ chosen race as successors to the Jews. This particularly affected Roman Catholicism, which adapted to the circumstances by declaring the Jews were no longer to be considered ‘Christ Killers’. Islam was also impacted.

I was last accused of being a ‘Christ Killer’ by a Nigerian Catholic about five years ago, so the message has still not penetrated to the bottom of the pile (sic) in Roman Catholicism. However, Islam justifies its existence on the basis that god dumped the Jews (they failed to beat the Romans) and sent Mo to preach a new gospel to a new ‘chosen people’.

It is probably very difficult for modern westerners to understand the importance of feeling ‘chosen’ when confronted with obvious contradictions to that ‘chosenness’. This was particularly true in the circumstances of the 1948 War of Independence, when the nascent State of Israel (pop. 680,000) defended itself against invasion by five armies comprising some 1.2 million soldiers whose aim was (and still is) total genocide.

This miraculous event undermined all ‘replacement theology’-based religions. It shook them to their very roots.

It is also hard for Westerners to understand the depth of religious faith in the Middle East, a close comparison would be with the political religions of socialism, where the core values of socialism are so established in the psyche of ‘believers’ that they are not to be even questioned (taxation as a form of redistribution of wealth, National Socialism as ‘right-wing’ and many, many more).

That Islam failed in its attempted genocide of Jews in Israel is a total contradiction in Islamic theology, and the idea of a despicable Jew — whom god has rejected — achieving ‘equality’ (even superiority) with a Muslim is theologically unacceptable. The rationalization has therefore been to describe Israel as ‘Satanic’.

Islam is not subject to the same vectors in dilution of belief as Christianity. And, yes, it may well be that the average Muslim adheres to a faith because of peer pressure and fear. But when a Christian goes ‘back to the bible’ he/she finds:

But when the Muslim goes back to Koran he/she finds:

And, yes, the Old Testament contains some nasty stuff too, but one must always look at context. For example, adulterers are to be stoned, yes, but only if firstly there is a Priest present (no OT priests since 70 AD), and that BOTH guilty persons are stoned at the same time (this was the basis behind Jesus’ statement “He that is without sin among you, let him first cast a stone at her” as the scripture tells us that only the woman was present). The Bible is self-adapting!

The other big difference here is that faith in Yah, or Jesus, is a personal private choice, whereas Islam is compulsory for all, and non-compliance is punishable by death or slavery. Forcible conversion in Judaism or Christianity is unscriptural; in Islam it is obligatory.

I might point out here the some more pure forms of the Socialist political religion(s) also practise scriptural execution and slavery as a consequence of unbelief, so Islam is not unique.

One should therefore see the Arab-Israeli war in the context of a religious war where the forces of Islam need to erase Israel as an entity because its very existence demonstrates the fallacies of Islam. Many in the Middle East see Israel as a ghetto on a national scale, and we can see how the ‘liquidation’ of that ghetto might work.

This is also why the likes of the PA and Hamas do not distinguish between military and civilian targets — to Islam there is no difference. It also explains their callous attitude towards their own people. Those children killed whilst shielding the fighters are martyrs and so go straight to heaven (if they are male) so what does it matter? Tough luck on the girls, but they don’t really matter either.

It is very naïve to judge Islam by Western standards, but I do not believe for a moment that our western masters do. They have all read the books, but choose to tell the hoi polloi a different story, one that fits their public agenda. Their real agenda is somewhat more obscure.

What we do know is that the Muslim Brotherhood is high up in the inner circles of that agenda. As Diana West hints in American Betrayal, they have replaced the KGB agents of influence in the current and probably the previous administrations. We can see the spoor, and it stinks, so whose food is this animal actually eating?

I cannot help but feel that there is Saudi money in there somewhere. The Saudi royal family live behind high walls. They pay lip service to Islam in public, but what goes on inside those walls?

There is now a controlling influence in the world such as has never been before. Disparate governments move with a singleness and timing of common purpose. The international media are all singing from the same hymn sheet. There is no platform for dissent, anywhere — except the Internet, and that not for not much longer, I guess.

We look at the policy on Iran and nukes, a policy that is just unbelievably stupid, so let us be in unbelief about this, too. What if the reality is that the Saudis are just itching to buy in Khan’s Paki supermarket? And that this is not about an Iranian nuke, but all about a Saudi nuke…?

Remember that attempted genocide in 1948? The Saudis were there, too, and Islam is still compromised.

And did this administration or its leader ever kow-tow to the King?