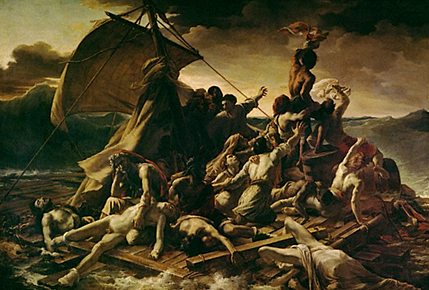 The title of this post is a reference to the venerable Anglican hymn “Eternal Father, Strong to Save”, which begins with the following verse:

Eternal Father, strong to save,
Whose arm hath bound the restless wave,
Who bidd’st the mighty ocean deep
Its own appointed limits keep;
Oh, hear us when we cry to Thee,
For those in peril on the sea!

The words were written by William Whiting in 1860 and set to music by John B. Dykes in 1861. The hymn gained immediate popularity with the Royal Navy, resonating in the hearts of those who faced grave danger to hold together the far-flung nautical networks of the British Empire at the height of its power.

Some years ago the future Baron played this hymn on the organ during the funeral of a veteran of the U.S. Navy, at the request of the widow. She said it had been her husband’s favorite hymn.

“Eternal Father, Strong to Save” popped into my mind last night when I read the news that Bosch Fawstin has had to go into hiding. Mr. Fawstin won the grand prize and the “people’s choice” award at last weekend’s Muhammad Cartoon contest in Garland, Texas.

Now Mr. Fawstin, like so many other Motoon artists, is forced to go about his day-to-day activities in fear of his life.

And other cartoonists have already paid the ultimate price for “slandering the prophet of Islam”, notably those slaughtered back in January at the offices of Charlie Hebdo in Paris. Funnily enough, the new editor of Charlie Hebdo has just repudiated Pamela Geller and other Counterjihad activists…

Or maybe it’s not so funny after all. Maybe the remaining staff at Charlie Hebdo have learned their lesson. Maybe they want to stay alive, and have decided to accept the ground rules of sharia in order to save their miserable kuffar skins and live as dhimmis in the new Islamic Republic of France.

Today comes word that the Islamic State has vowed to kill Pamela Geller.

It’s not hard to see why 95% of prominent American “conservatives” — or at least the talking heads and pundits who get their mugs on TV and their scribbles in the paper — have chosen to denounce last weekend’s AFDI event in Texas, or remain studiously silent. They, too, seem to have gotten the message: If you want to stay alive to enjoy the perks and privileges of your established comfortable position, don’t mess with Islam.

There is indeed peril on the sea for all those doughty sailors standing stalwart on the heaving deck of the Counterjihad. Please keep them in your thoughts and prayers.

Also: We’ve just come off our quarterly fundraiser, which prompts me to wonder how some of these endangered souls can afford to protect themselves. Bosch Fawstin received that well-deserved first prize in Garland, but it may not go very far towards paying for his personal security, which can be very expensive. Please visit his blog and click the “donate” button, or buy his Pigman books. Or both.

The same goes for other sharia opponents who are in imminent danger, including Robert Spencer and Pamela Geller.

Geert Wilders has managed to stay alive for ten years only by giving up all hope of a truly private life. He lives with armed bodyguards 24 hours a day.

How many more people will have to do the same?

And how many will be slaughtered before we finally prevail?

O Trinity of love and power!
Our brethren shield in danger’s hour;
From rock and tempest, fire and foe,
Protect them wheresoe’er they go;
Thus evermore shall rise to Thee
Glad hymns of praise from land and sea.

18 thoughts on “For Those in Peril on the Sea”