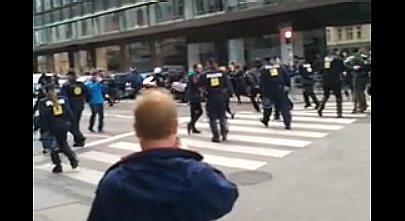 The Danish chapter of PEGIDA, which is now known as “For Freedom” (For Frihed), stages a walk against Islamization every Monday night in downtown Copenhagen. Today is the 70th anniversary of the liberation of Denmark from the Nazis, and the “anti-racist” counter-protestors had promised to destroy any PEGIDA event on this date. As a result, this evening’s march was expected to be eventful.

However, the police did their job, and the May 4 “For Freedom” walk went off without a hitch. A Danish contact who was present on the scene sends the following summary of what happened tonight:

The police said it was “business as usual” today. But I counted sixteen police cars when the demonstration started.

About fifty “For Freedom” marchers attended tonight’s walk, versus two hundred or so counter-demonstrators trying to get at us. However, there were also about two hundred police officers present — one for every leftist thug.

And the police were better prepared this time, with full riot gear. The antifas wanted very badly to commit violence against us, and tried to throw projectiles over the heads of the police. However, the cops kept them back, and we were able to march in a peaceful and orderly fashion along the designated route. There were no clashes between the lefties and “For Freedom” — they couldn’t get at us.

The report in Jyllands-Posten referred to “violence on both sides” — as if we had been at all violent! There was no violence on our side, none. All of it came from the counter-protestors.