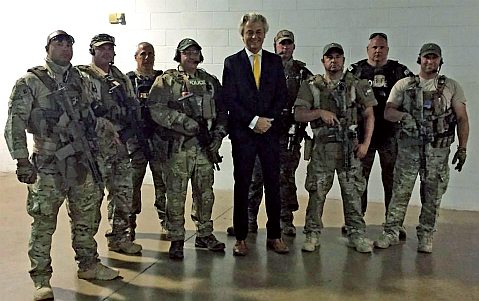 Geert Wilders was the guest of honor at yesterday’s Muhammad Cartoon Contest in Garland, Texas. Before the event was interrupted by the attack by (and death of) two mujahideen outside the venue, Mr. Wilders presented the grand prize to Bosch Fawstin, and had his photo taken with the SWAT team that was defending him and the other guests from attacks such as the one that eventually took place.

A companero of mine sent me a copy of a tweet he got from a friend: “My favorite drawings at the Muhammad cartoon festival in Texas were the two chalk outlines out front.”

The following video features the speech given by Geert Wilders for the occasion:

Below is the prepared text for Mr. Wilders’ speech:

Thank you all for being here. It’s great to be in Texas, the Lone Star State. The one star in the Texan flag represents all the free Western world needs today: defiance, pride and independence.

It is no coincidence that we are in Garland, Texas, tonight. It is here that, three months ago, shortly after the Charlie Hebdo massacre, Islamic activists convened to demand that free speech be curtailed. They want to prohibit cartoons, books and films which they find insulting.

Friends, allow me to thank Pamela Geller for organizing this exhibition.
Pamela is an extraordinary woman. I only have a few heroes, but Pamela certainly is one of them. Let us give her a big applause!

My friends, you are all winners. Everybody present here tonight deserves respect, just for being here.
The cartoonists, the participants in this Muhammad contest all did fantastic work. All of you are not only talented but also very brave. For Islam has put a death sentence on depicting Muhammad. But this has not frightened you. And even if it did, it has not stopped you. Because you believe in freedom of speech.
I applaud you for that.

However, there can be only one winner of the contest. And that is, as you already know, Bosch Fawstin.
Bosch knows what he is talking and cartooning about, being a former – or in his own words recovered – Muslim.
I have known the fantastic work of Bosch – who also created the anti-jihad superhero Pigman – for many years already and I want to congratulate him for his bravery and excellent work and winning the contest today.

I am on death lists of Al-Qaeda and the Pakistani Taliban and terrorists from ISIS because I tell people the truth about Islam. Islam has declared war on us, on our Judeo-Christian civilization. Islam wants to rob us of the freedoms and liberties. Islam and freedom are totally incompatible.

I am a politician, but cartoonists, like my good friends the Danish cartoonist Kurt Westergaard and the Swedish artist Lars Vilks, are also on the death list. Both Kurt and Lars have already been the victims of murder attempts.

Another man on this list was the cartoonist Charb, editor of the French magazine Charlie Hebdo. As we all know, he and 9 of his colleagues were murdered last January in Paris by followers of the religion of hate. According to Islamic Sharia law, they were all guilty of the same crime.
The crime of depicting Muhammad, the crime of defaming the so-called Prophet of Islam.
A crime punishable by death by the religion of death.

In order to show them that we will not have Islam dictate us the law, we are here with an exhibition of Muhammad cartoons.
We are here in defiance of Islam.
We are here to defend our rights and stand for freedom of speech.
That is our duty.
As Ronald Reagan, your greatest president ever, said: “Freedom is never more than one generation away from extinction. We didn’t pass it to our children in the bloodstream. It must be fought for, protected, and handed on for them to do the same.”

Our Judeo-Christian culture is far superior to the Islamic one.
I can give you a million reasons. But here is an important one.
We have got humor and they don’t.

Friends,
You are extremely fortunate to live in America. Because you have a first amendment.
In Europe, it is not just the jihadis who go after you. The authorities do so, too.
In the Netherlands, I have been dragged to court on hate speech charges for speaking the truth about Islam. I was acquitted, but now the authorities are prosecuting me again.

We are harassed, but sympathizers of the Islamic State are left in peace. Last Summer, they took to the streets in The Hague. They carried swastikas and ISIS flags. They shouted “Death to the Jews.” And you know what? The authorities did nothing. We have weak leaders. Appeasers are ruling The Netherlands, Europe and the USA. We have to turn the tide and we will. New leadership is what we need to defend our freedom of speech and resist the ongoing Islamization of the West.

Today, many of our Western leaders want us to shut up.
When we tell the truth about Islam, they call it Islamophobia.
When cartoonists make drawings of Muhammad, they are accused of provoking people.
A few years ago, in my country, the Netherlands, the police even raided the house of a cartoonist.
In his address to the United Nations in 2012, President Obama said: “The future must not belong to those who slander the prophet of Islam.”

But we say: The future must not belong to Islam!
Do you hear, Mr Obama? We say: No to Islam!!

Unlike President Obama and his European colleagues, we are not willing to sign away our freedom and independence.
The day we give away humor and freedom of speech is the day that we cease to exist as a free and independent people.
And that day will never come.
That is what this exhibition is all about!
From here we send a message to President Obama and all his colleagues: We will never submit!

We are not intimidated by Islam.
We will not be picking up swords and axes and breaking into people’s homes. But we will not remain silent either.
Moderation in the face of evil is evil. This is not what our age needs. We must uncap our pens; we must speak words of truth. We are facing a determined enemy who is striving through all means to destroy the West and snuff out our traditions of free thought, free speech, and our Judeo-Christian values. Make no mistake: if we fail, we will be enslaved. So the only option is to defend our freedom with all the energy we have. It’s time to be brave. It’s time to do our duty.

Instead of giving in to fear and adopt the Islamic taboo on depicting Muhammad, I propose that we draw another conclusion:
Lift the cause of the fear!
Let us de-islamize our societies!
No more Islam, no more mosques, no more Islamic schools. It is time for our own culture and heritage.

Let us liberate ourselves from tyranny.
That is another good reason why we are having this exhibition here today.
Depicting Muhammad is an act of liberation!

Let us hold similar exhibitions all over the United States and all over the free world. From Canada to Australia to Europe.
We need Pamela Geller everywhere in the world.
I invite you to come to the Netherlands with this exhibition. I will help you exhibit these cartoons in the Dutch parliament building.

We will never allow Islam to restrict freedom!
And we will never bow in the direction of Mecca!

That is why we say: The less Islam, the better!

There is no turning back once one has become a Muslim. For even though article 18 of the Universal Declaration of Human Rights states that every person has the right to “change his religion or belief,” in Islam there is only a death penalty for leaving the faith.

So, let us expose Muhammad. Let us show the world what Islam truly is.
And let us support Muslims, like Bosch, who wish to leave Islam and liberate themselves from fear.
Apostates are heroes and more than ever they deserve the support of freedom loving people all over the world.

Muhammad fought and terrorized people with the sword.
We fight Muhammad and his followers with the pen.
And the pen will prove mightier than the sword.

Muhammad’s followers fight us with bloodbaths, but today here in Garland we fight them with humor.
Because bloodbaths enslave, while humor liberates.

Let me end by quoting Sam Houston, the founding father of this great state of Texas:
“Texas has yet to learn submission to any oppression, come from what source it may.”

May his words inspire us all today never to submit to Islamic barbarism.

Thank you very much.

18 thoughts on ““Depicting Muhammad is an Act of Liberation!””