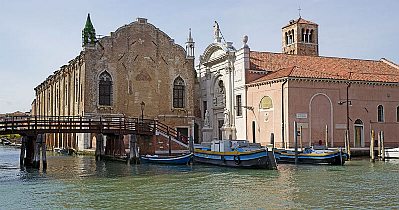 The Church of Santa Maria della Misericordia in Venice is being used by Muslims for prayers, without the authorization of either the Patriarchate or the property owners.

Many thanks to par0 for translating this article from Il Giornale:

Mosque in the Church, the Patriarchate reacts: “Never have I authorised anything of the sort”

The “temporary mosque” set up by the Icelandic pavilion [= how the different nations’ areas of exhibition are referred to] of the Biennale of Venice is illegal.

This is the declaration of the main ecclesiastic authority of the lagoon city and the whole region, the Patriarchate of Venice. In a strong statement on his own website, he reminds us that, although the church has been closed to the faithful and has been private property since 1973, “authorisation by the ecclesiastical authority, regardless of the private owner, is obligatory for any other use different to that of the Catholic faith”

In this particular case authorisation has never been requested nor granted, either by the owners, the Icelandic Pavilion, or the Muslims that organised their prayer there.

The Patriarchate also clarified that in February the Venetian Church had already rejected the authorisation for similar projects proposed in other churches. The statement continues “The singularity of the proposed project – which has now occurred in the church Santa Maria della Misericordia – necessitated greater attention and required the involvement of the interested religious communities and not only the evaluation of the artistic project and the authorisation for the use of a space, regardless of who owns it, the choice to use a church closed to the faithful – and no longer of ecclesiastic ownership – does not resolve this aspect but ignores it.”

It hurts that a city like Venice, always a crossroads between different cultures and traditions and of different religions, has encountered this lack of respect for the identity of the host, which courtesy requires that you knock before opening a door. It makes it very difficult to promote interreligious dialogue on this basis.