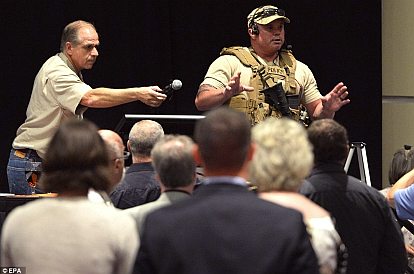 Pamela Geller and the Freedom Defense Initiative held an awards ceremony this evening for the Draw Muhammad Contest in Garland, Texas. The event was interrupted by gunshots, and two suspects wounded a policeman before being shot dead themselves. They reportedly carried explosives as well as automatic weapons.

Below are excerpts from the report in The Daily Mail, which includes some excellent photos. You’ll notice, however, that the Mail has fastidiously blacked out an easel holding one of the Motoons.

Two armed suspects believed to be carrying explosives have been shot dead after opening fire outside an anti-Muslim art exhibition in Dallas.

The pair were gunned down after shooting a officer in the leg outside the Curtis Culwell Center in Garland, Texas, during a ‘family event’ where caricatures of the Prophet Muhammad were being displayed.

The building and surrounding area was placed on lockdown by a SWAT team with hundreds of attendees still inside after multiple gunshots were heard.

No one was allowed to leave as surrounding businesses, including a Wal-Mart and Taco Bell, were evacuated as authorities searched for two more devices.

Two suspects pulled up in a vehicle with explosives, before getting out and firing at the officer, identified in local reports as Bruce Joiner.

He was taken to hospital in a stable condition and is expected to survive.

The attack unfolded shortly after Dutch member of parliament and leader of the far-right Party for Freedom, Geert Wilders, had delivered his keynote speech.

In 2009, he sparked controversy for showing a controversial film which linked the Koran to terrorism and has previously said the Netherlands is being taken over by a ‘tsunami of Islamisation’.

Pamela Geller, the organizer, told CBS 11 from inside the building: ‘I heard officers talking of possible explosions in backpacks and the car. There was talk of a grenade at the nearby Wal-Mart.’

The event was set up by the American Freedom Defense Initiative and had been described by opponents as an attack on Islam.

The organizers believed they were exercising their freedom of expression.

They believed it. But was it true?

Were they simply practicing free expression, or were they slandering the prophet of Islam?

If the latter, then the future does not belong to them. Just ask our president (pbuh).

15 thoughts on “A New Motoon Crisis”