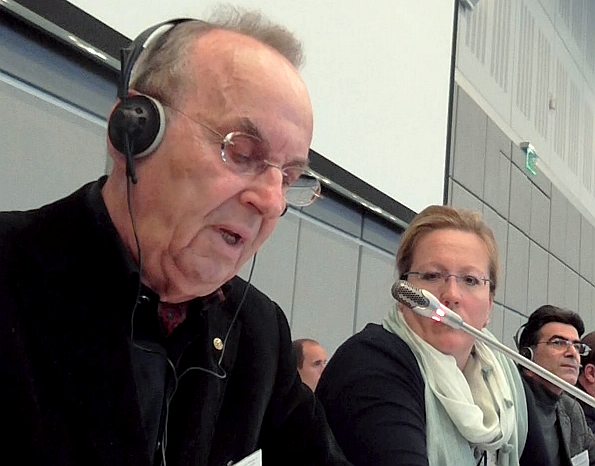 On Thursday and Friday the Organization for Security and Cooperation in Europe hosted the “Supplementary Human Dimension Meeting on Freedoms of Peaceful Assembly and Association, with Emphasis on Freedom of Association” at the Hofburg in Vienna . Harald Fiegl and Elisabeth Sabaditsch-Wolff were among the participants at yesterday’s conference.

Below is the translation of a German-language intervention read by Harald Fiegl on behalf of Mission Europa Netzwerk Karl Martell at yesterday’s plenary.

Where is the Dialogue?

Mission Europa is an Austrian NGO and as such, since 2008, the 60th anniversary of the signing of the United Nations Declaration of Human Rights, has been part of the organizing team for a torchlight march in order to bring to light the persecution of Christians, especially in countries of the Middle East.

Mission Europa also supports Christians such as Chaldeans, Arameans, and others, living in Austria.

Mission Europa can participate in and organize these marches without any hindrance from the authorities; however, we have noticed that the dialogue the OSCE would like to see taking place is refused by the authorities.

As a result, the recently adopted Law on Islam did not include the concerns expressed by the public.

More on the Islam Law in Austria:

3 thoughts on “Where is the Dialogue?”