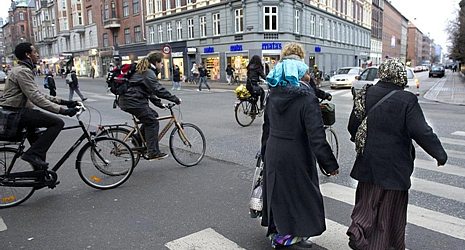 “Freedom of expression is the central nerve in a functioning democracy. Without it, democracy will die.”

The translated article below from Berlingske was originally published at Vlad Tepes. Many thanks to Liberty DK for the translation:

We have to ask the question: Was Mohammed doing the right thing?

Tina Magaard knows Islam to the core, both personally and academically. She believes that the Danish experts on Islam have failed to disclose what is really written in Islam’s holy scriptures, and to what degree extremists draw their ammunition from them.

Tina Magaard has been away for a long time. Away from both the debates about Islam that she had helped shape in the middle of the 2000s, and also from her home in central Jutland.

She is, after working at some of Europe’s finest universities on top of a career in the capital, happy to be back in the heart of Jutland, specifically at Aarhus University’s campus in Herning, located a mere stone’s throw from the city’s landmarks: Ingvar Cronhammer’s iconic “Elia” sculpture.

But in terms of a return to the debate on Islamism, Tina Magaard is a bit more skeptical. Back when she was employed by Iranian-born Mehdi Mozaffari, a Professor Emeritus Dr.sc.pol at Aarhus University from 2005 to 2008, she learned how costly it can be to deal with Islamism and integration.

Not least in the wake of the cartoon crisis, when she was one of the few Danish academics who spoke up against the general consensus that reigned among Danish Islam-researchers who almost unanimously claimed that acts of terror had nothing or very little to do with Islam’s central tenets and scriptures.

However, after the terrorist attacks in Copenhagen and Paris, Tina Magaard has nevertheless decided to briefly return to the debate about Islam in Denmark.

Tina Magaard’s first meeting with Arab culture took place in the late 1980s, when she worked at a restaurant owned by a Jordanian man in Kolding. A place that many of the city’s middle eastern immigrants frequented.

“I spent more time there than I spent in high school. There were several of us who would hang out there, even when we were not at work. “

However, the relationships between the sexes were very clearly defined.

“The first thing my boss said to me when I was hired was, ‘Never trust an Arab man.’ He stressed that I should come to him if any Arab men at the restaurant tried to approach me. He would then make it very clear to the potential “candidate” that things should be done in an orderly manner. I was treated with respect in that environment, almost as if I had been his daughter”, she says.

Under the Jordanian café owner’s Arab paternalism and safe wings, it was easier to navigate in that environment than even among the culturally radical teachers at the school who represented something new and unknown. Because Tina Magaard was not raised in an atheist, academic or culturally radical family where one subscribes to the newspaper Politiken and maintains a becomingly urban and ironic distance from God. Quite the contrary.

From the age of 11 she lived with her evangelical grandmother, and she has read the Bible from cover to cover. And although she has long since put religion behind her, the experience stayed with her.

“The impact of growing up in that environment has actually been to my advantage when I have had to navigate in Muslim communities in Europe and the Middle East,” she explains.

“It has made it easy for me to understand what it means to let religion be a guideline for this life, and the security it can provide, but also how it changes your behavior when you are fearful of going to hell.”

After high school, Tina Magaard set out on a journey to meet the world. First Brussels and later to Paris, where she took her Ph.D. In France she gained a whole new perspective on culture and Islam as she moved in cosmopolitan circles amongst anarchists and leftists, learned Oriental and Indian dance and questioned all dogmas with curiosity.

Her friends also asked questions, and several of them came from North Africa and Iran. She became very aware of how difficult it was for them to express themselves freely, as radicalized members of immigrant communities constantly tried to put a stop to their exploits with direct references to the Koran and Islam’s tenets. Even something as innocuous as traditional Indian dance was hated and condemned by Islamists.

“That some in the Islamist environments consider it legitimate to use violence to punish those who they believe violate Islam is not something that is created by European racism, nor did it arise out of thin air with the cartoon crisis. It is a trend which has for many years curtailed the rights of artists and critically thinking individuals in Muslim countries and Muslim communities in Europe. The only new development is that now the violence is also directed toward non-Muslims,” says Tina Magaard.

The weak but strong

The civil war which played out in the early 1990s between the government and Islamists in Algeria was crucial for Tina Magaard’s understanding of the cultural war that takes place in Muslim communities around the world. It was an extremely bloody conflict in which extremist groups, several of which today have links to al-Qaeda, massacred hundreds of thousands of civilians:

“I have met many liberal-minded exiled Algerians who were opponents of the Islamists. They asked a lot about what was going on in Scandinavia, and they claimed that the fundamentalists actively sought to go to Denmark and Sweden, where they could obtain refugee status or marry and get citizenship, thereby having access to state welfare benefits. This made it possible for them to collect money that they then sent on to the Islamist movements in their countries of origin. So the welfare state funds were used to finance terrorism and the fight against secular-minded Muslims and other religious minorities. Furthermore, these were used for social programs that served to lure more people into their ideology. The liberals Algerians were extremely indignant that Scandinavians let this happen,” she says.

“Although it is inherently difficult to verify these types of claims, it made me aware of how persons who in Denmark were unambiguously perceived as victims, could themselves be oppressors and even use the welfare state as a means to oppress others,” she says, emphasizing that victims of Islamists are always first and foremost other Muslims.

During the 1990s Tina Magaard also taught intercultural communication at a Finnish business school. Among other sources, she used people who stressed that Islam in its essence is a peaceful and tolerant religion that had simply been misunderstood or hijacked by extremists.

But this put her in a dilemma, because even though she wanted to believe that this was so, she herself had had many experiences throughout her life that suggested otherwise. Both Islamists and those they persecuted were distinctly in agreement about one thing: the justifications for restricting freedom of expression, artistically, literarily and politically, were taken directly and often verbatim from Islam’s holy scriptures.

She then decided to examine the sources. She studied Arabic and read both the Qur’an and the hadith. Here she recognized many of the repressive tendencies she had experienced in her environment.

“What is striking is not only that one can find violent passages in Islamic texts; these can be found in many holy scriptures. What is striking about these texts is how much these passages are filled with and how much they are centered on an us-and-them logic where infidels and apostates are characterized as dirty, rotten, criminal, hypocritical and dangerous. It was also striking the degree to which these texts demanded the reader to fight the infidels, both with the word and the sword. In many passages Mohammed plays a central role as the one who encourages the use of violence, whether it is by stoning, beheadings, acts of war or execution of critics and poets. “

Tina Magaard finds it particularly objectionable that many Islamic scholars, in her opinion, knowingly fail to disclose this fact and use their position of power to create specific standards for what people are allowed to say. Often, they put the blame on Danish racism rather than candidly disclose that the justification for using violence and threats as extremists is actually to be found in the holy scriptures.

“The core of the problem is a lack of acceptance of the liberal freedoms we have in the EU, as well as the justification of violence to promote an Islamic agenda that primarily affects other Muslims. If a researcher fails to disclose it, you actually end up taking sides in an internal Muslim cultural war, while concealing important knowledge from the public. To blur the religious injunctions and rules found in the Koran and the hadith is dishonest. And no, they do not explain everything, but they are an important part of the reality that it is the task of the academics both to understand and to communicate, and therefore you have to engage them.”

The demands will continue

Asked whether, after Krudttønden and Charlie Hebdo, it is desirable for the sake of future harmony and coexistence to refrain from drawing Mohammed, Tina Magaard’s answers unequivocally:

“The only thing we earn by saying that we must not draw Mohammed is that there will be more religiously motivated restrictions on our freedoms. Rather, we must take the bull by the horns and question whether Muhammad did the right thing when he, for example, ordered his critics murdered. That is the discussion we need to take up with European Muslims.”

According to Tina Magaard, the most thought-provoking issue is that it is difficult to find an Imam who dares or even wants to criticize those aspects of Islam that stand in marked contrast to liberal freedoms, although there are many Muslims who do not personally share the ideology found in the tenets of Islam.

“Instead you get a diffuse chitchat such as: “That is not appropriate to discuss in Denmark now” or “that is a misunderstanding.” You will also hear no criticism of the concrete passages, such as those the terrorists use to justify their actions, “she says.

“In a study I conducted for the Ministry of Integration, I visited a variety of Muslim communities. Only the Ahmadiyya Imam clearly read the violent passages metaphorically, for example by saying that when it says that a thief must have his or her hand chopped of, it is a metaphor to say that one should prevent one’s hand from stealing more.”

But she also mentions that the Ahmadiyyas are regarded by virtually all other Muslims as apostates, partly because they read the Koran metaphorically.

“It shows how difficult it is to get started on the reform of Islam, which is necessary for Muslims to live in peace with each other and us. But we have to push to promote this reform in order to safeguard the freedoms that our society is based on and which have ensured our prosperity. Freedom of expression is the mother of all other freedoms. It’s not just about having the right to shout and scream at each other. It’s about being able to criticize any religious dogmas without being exposed to violence or threats of violence. Freedom of expression is the central nerve in a functioning democracy. Without it, democracy will die.”

19 thoughts on “What Would Mohammed Do?”