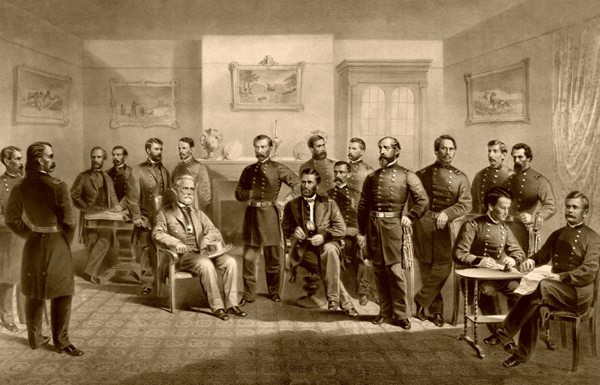 I was away most of the day on various errands; that’s why posting has been light — or, rather, non-existent.

My itinerary took me to Appomattox, and, as it happens, this is the big weekend — the 150th anniversary of the surrender of General Robert E. Lee to General Ulysses S. Grant, which took place at Appomattox Courthouse on April 9th, 1865.

The town was crammed with re-enacters and tourists, and police were stationed between the shopping center and the highway, and along Route 24 to the historical park, directing traffic. It had been raining relentlessly for two days, and all the parking fields looked nasty and muddy. The fields around the old courthouse village were full of tents, and men wearing the uniforms of both armies were in the Wal-Mart buying supplies.

Merchandise featuring the faces of Generals Lee and Grant was on sale everywhere. You could get T-shirts, posters, key chains, knick-knacks of any sort, as mementoes of the place “Where Our Nation Reunited”.

Well… Not quite. But who wants to spoil the celebration?

As I drove out of town late in the afternoon, a new line of squalls was just coming through, and it looked like another big column of rain was about to make a direct hit on the historical park. I didn’t envy those poor guys in their blue and gray uniforms camped out in the pup tents.

The Civil War is the core event of American History, much more so than the Revolution or World War II or any other momentous occurrence. It is the wound that will not heal.

And Virginia is the epicenter of it all — more battles took place on its soil than in any other state. After Richmond and Petersburg fell, when the Army of Northern Virginia surrendered, it meant the war was over.

The last military engagement of that war — there were no more than skirmishes at Appomattox — was the Battle of Sayler’s Creek (often misspelled “Sailor’s Creek”), which took place on the boundary between Amelia and Prince Edward counties on April 6th, 1865. Accounts of the battle indicate that the creek was rain-swollen that day, much as it must be right now.

Many years ago Dymphna and I took the future Baron to a re-enactment of the battle at Sayler’s Creek for the 130th anniversary (it was fine weather that day). Afterwards I ruminated on the events of those times, and wrote the following poem, which I’ve placed below the jump.

There is too much history here in Virginia;
we are drowning in its muddy flood.
Every April sweeps its pontoons from their moorings
on the North Fork of the Shenandoah
with Federal soldiers watching helplessly from the bank.
Every pitcher toeing the mound
scuffs up a lode of Minié balls.
A metal detector swept over any ravine
uncovers the belt buckles and canteens
urgently shed by fleeing infantry.
A faded daguerreotype of General Lee
stares down from every wall,
a stern reminder of all that vanished glory.

The top drawer of every dusty dresser
in every second-hand shop
opens to reveal a brittle bundle of worthless banknotes.
Everyone’s great-great-uncle Theophrastus
led the charge at the Crater.

And everywhere Stonewall Jackson appears,
a red-bearded grey blur leading his brigade
clattering over wooden bridges, through deep hollows,
crushing the newly-opened green parasols of mayapples,
leaving with their boots little chevron-shaped tarns
of muddy ditchwater, passing and re-passing every location,
named and unnamed, in the entire state.

And the cemeteries: one stands on each ridge,
with maybe a pigeon-stained gaunt granite rifleman
guarding it from a nearby pedestal, every grave
lined with faded dates on a stone and a welter of violets.
We hurry past these, hoping through them
to leave this wilderness and reach that distant cold harbor.

But such are the burdens we must bear.
Neither ghosts nor the living: they are the past,
the encrusted mollusks of occurrences
that barnacle the great pilings
of our sovereign commonwealth.
We shall not be quit of them
short of emigration to the outer planets
or a deep draught of nepenthe.

The April rains of history have left the creek swollen;
the water rises around my knees.
Over the hill I hear the muffled rumble
of distant artillery, and I look up, expecting
to see ragged and bandaged figures at the crest.
But it is only the afternoon thunderstorm
descending from the mountains
while, over my head, the blue and the grey
still grapple their eternal combat
across the turbulent vastness of the sky.

43 thoughts on “The Sesquicentennial Arrives”