Our Indian correspondent The Kafir sends this follow-up to his most recent post. 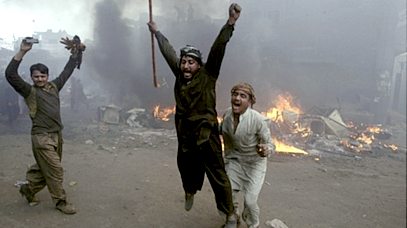 The Mentally Damaged Men of Islam
by The Kafir

The problem in Muslim societies is not just the failure of many men to have a mate all their lives — although that is certainly the case there for more men than in any other society, due to generally adverse male-to-female ratios, and the practice whereby wealthy men take multiple wives and concubines. There have been regular cases of wealthy sheikhs taking child brides from India. For these reasons many men will be deprived of mates for life.

But even more acute is the problem caused by gender segregation practiced by Muslims.

It may be readily observed that with girls around, boys seem to mellow down. Any teacher would testify that disciplining a mixed class of girls and boys is far easier than a class of boys only.

A Muslim boy is kept away from girls from a very early age. He also grows up watching females being cursed and even beaten. This scars him for life, and he becomes incapable of a healthy interaction with opposite sex. And that seems to make him full of rage. The problem of sodomy that is ever-present in such situations doesn’t help, either.

This is borne out by a common scene from Morocco to Indonesia. When Muslim mobs kill a man, in a large number of cases they cut the penis off the victim, and place it in his mouth. This cannot be simple chance: there has to be deeper psychological reason for this practice, which is common to all Muslim societies.

And of course, the stunting the growth of mental faculties by brutally beating the children to make them learn by rote in Quran schools must have consequences. And hearing the repeated curses aimed at kafirs has its own consequences.

In summary, the process of growing up in Muslim societies is such that leaders of Islam will never run out of feral human beings, unfit to live in modern societies, ready to be unleashed as a weapon against kafirs.

Kafirs must ask their own ruling elites: “Why are you asking us to live alongside these feral human beings who seem not to have any control over themselves?”

Maybe if Muslims were to be totally physically separated from kafirs, all over the world, that might force Islam to reform. But as long as they have an outlet in the form of kafir women and kafir wealth for their pent-up frustrations, the chances of any reformation, or outright rejection of Islam, are all but nil.

And of course it is the greatest betrayal by kafir ruling elites to force kafirs to share their cities, towns, and villages with these mentally damaged men.

48 thoughts on “The Mentally Damaged Men of Islam”