In his latest essay, Fjordman discusses the ongoing and accelerating “migrant” crisis in the Mediterranean.

The Camp of the Saints meets Eurabia
by Fjordman

Since the Industrial Revolution began a couple of centuries ago, the world has witnessed a rapid population growth of billions of people. This is unprecedented in the history of our species. The population explosion is still going on in many parts of the global South, especially Africa and the Islamic world. Combined with modern means of cheap mass transportation, this has triggered the largest and fastest migration waves in human history. People’s smuggling has become a huge international industry. Many illegal immigrants travel by land. Some use boats. 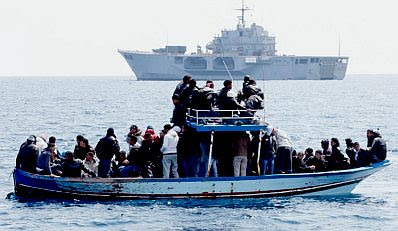 Boats have been crossing the Mediterranean Sea for years, loaded with migrants from Africa and the Middle East headed for Europe. Yet things have escalated dramatically. In April 2015 several shipwrecks with illegal immigrants on board, causing hundreds of deaths, brought this issue to the forefront of Western news.

On April 22, 2015 the head of the African Union said quick solutions to the migrant crisis in the Mediterranean do not exist. “If people don’t have livelihoods at all, they are not going to sit and die of hunger, they are going to look for greener pastures,” Nkosazana Dlamini-Zuma told reporters in Brussels. She was visiting representatives of the European Union (EU). Her comments followed a meeting with EU Commission President Jean-Claude Juncker where the two discussed migration and human traffickers. Dlamini-Zuma, the ex-wife of South African President Jacob Zuma, comes from a country plagued by violent clashes between local blacks and recent immigrants from other parts of Africa. The white minority is also constantly at risk of violent attacks. Yet when many Africans today lack livelihoods, even food or water, perhaps it is not a good idea for Africans to double their numbers. That is what current estimates predict that they will do in the coming 35 years.

I wrote on my bilingual Twitter account that what is happening now in the Mediterranean is an invasion. This statement proved very controversial in certain circles. One Swedish columnist presented me as “the mass murderer Anders Behring Breivik’s ideological ally” and a “Nazi.”

I admit that the term “invasion” is provocative, but sometimes you need to be provocative to get a response. An invasion does not always have to happen with tanks.

The Nazis wanted more Lebensraum for Germans. This was seen as evil, and other Europeans fought them. Why are they now supposed to meekly accept more Lebensraum for Nigerians, Somalis, Arabs or Pakistanis in Europe? Despite their flaws, the Germans have at the very least shown themselves capable of maintaining a science-based industrial economy. That is not the case with Nigerians or Somalis.

Consider this simple fact: Demographers believe that the global human population exceeded one billion people for the first time around the year 1800 AD. This was during the early stages of the Industrial Revolution. It took all of humanity hundreds of thousands of years to reach that level. Demographers now estimate that Africa alone can increase its population by one billion people or more in the coming 30 years. A single continent in just three decades can thus add to the global population more than the entire human race did in hundreds of thousands of years before the Industrial Revolution. That puts the current population explosion into perspective.

Yes, these numbers worry me. I can add. Apparently, understanding basic mathematics now makes you a “Nazi.”

I come from a small, affluent and somewhat naive Scandinavian nation of a few million people. If a fraction of these newcomers from the booming global South are allowed into my country, my nation will be overwhelmed and will effectively cease to exist. This is perhaps the greatest dilemma for Europe in the coming century: Do we want to exist as a still-recognizable cultural entity populated predominantly by Europeans? 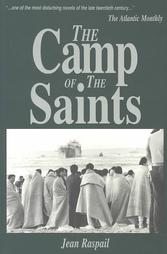 The Camp of the Saints is a dystopian novel written by the French author Jean Raspail. It was first published in 1973. Raspail has written many books, but the one for which he will be chiefly remembered is ironically his most atypical one. Two generations ago, The Camp of the Saints predicted a Third World mass invasion of Europe, causing the downfall of Western civilization. This process was compressed in time so that what might take fifty years in real life took fifty days in the book. In addition, the main bulk of illegal immigrants in the novel came from India. Today, while immigration to Europe comes from every corner of the planet, much of it comes from the Islamic world and Africa.

Apart from that, the novel was remarkably prescient in describing the dysfunctional mindset of the modern Western world. We have become so wedded to unsustainable humanitarian ideals that we are mentally incapable of defending our national existence. When faced with millions of people coming from the global South, we simply raise a white flag and say that they are welcome to colonize our countries.

At least, that is what our leaders and mass media do. If we watch the way the EU or the Pope react to mass migration in the Mediterranean, we see that they are behaving in almost exactly in the manner described in Raspail’s book. Europe risks committing suicide because of its abstract humanitarian ideals.

I checked the Wikipedia entry for Jean Raspail. Wikipedia is not always a reliable or balanced source of information. My own Wikipedia entry is almost ridiculously hostile and a case study in character assassination. Yet at least they got my date of birth right.

Jean Raspail was born in July 1925 and will thus turn 90 in 2015. His mind is still sharp. He has contributed to public debate well into his 80s. If he reads the newspapers now he can see that the southern immigrant hordes invading Europe by boat, as he described it in his novel, have turned into reality. He lived long enough to see the warnings he made generations ago become fact.

Eurabia: The Euro-Arab Axis is a non-fiction book published by Bat Ye’or (Gisèle Littman) in 2005. While it has been dismissed as a “conspiracy theory” by hostile mass media, Bat Ye’or never claimed to invent the term Eurabia. This was the name of a French journal in the 1970s. The names, dates and agreements referred to in her book are real. I have checked some of them personally. The only possible criticism that can be raised against her is that she misinterprets these agreements. They exist, and began in the 1970s with pressure from Palestinian terrorism and the blackmail of Arab Muslims from OPEC during the 1973 oil embargo.

In several books Bat Ye’or has explained the culture and mentality of dhimmitude, the status of non-Muslims submissive to Islamic rule. She further describes how Europe is gradually being transformed into a civilization of dhimmitude, an appendix to the Middle East that is subservient to Arab and Islamic demands. Part of this process consists of making common cause with Muslims through demonization of the Jewish state of Israel. Some of this development is supported by European political leaders, whether through stupidity or otherwise.

“First the Saturday People (the Jews), then the Sunday People (the Christians).” That is the mindset of militant Muslims. Western Europe has witnessed a number of deadly Muslim attacks against synagogues or other Jewish targets. Yet this Jihad will not end with that. Jews may be on the front line, but everyone is a potential target. Militant Muslims move on to other targets, such as artists, cartoonists, writers and intellectuals.

The Islamic attacks on synagogues and other Jewish targets in France and elsewhere are horrifying. Vandalism against churches has received less media attention. It is only a matter of time before Europeans experience Jihadist attacks on Christian places of worship, as we see in Pakistan or Iraq. The differences between the Middle East and Europe are growing smaller every day.

On Sunday April 19, 2015, Sid Ahmed Ghlam, an Algerian student in France, was arrested. Apparently, this heavily armed radical Muslim was planning to carry out terror attacks against Christian churches in the Paris metropolitan area. He was discovered by accident because he literally shot himself in the foot just before he could carry out his intended massacre. He may have been in contact with Jihadists from al-Qaida or the Islamic State (ISIS) in Syria. French security services and police had already been on constant high alert for months, following the Islamic massacre against the satirical magazine Charlie Hebdo in Paris in January 2015. French Prime Minister Manuel Valls reiterated government warnings that the country was facing an “unprecedented terrorist threat.” Security has been tight around Jewish communities and synagogues. It is questionable whether the police and the army have the physical capacity to protect thousands of churches across France as well.

Does that mean that French authorities have effectively lost control over their country? If so, what happens next?

Not all of the so-called “refugees” crossing the Mediterranean are innocent or peaceful. In one migrant boat, some Muslim illegal immigrants murdered Christians by throwing them overboard. Experts warn that Jihadists from the Islamic State (ISIS) could purposefully be hiding among boat migrants in the Mediterranean, intending to carry out terror attacks in Europe. ISIS is known to have loyal supporters in Libya. They have carried out several mass beheadings of Christians on the southern shores of the Mediterranean. For many centuries, the coast of North Africa was known as the Barbary Coast. Muslim pirates carried out regular slave raids against Europeans. Will these days now return, following the religious turmoil and population explosion in much of the Arab world?

Jean Raspail and Bat Ye’or (Gisèle Littman) are very different individuals. The first is a Christian man, the second a Jewish woman. They published their most important works years apart. Bat Ye’or’s non-fiction focuses mainly on Islamic issues and Muslim immigration. Jean Raspail’s most important work of fiction focuses on non-European immigration and European surrender in general. Yet they also have certain things in common. Both authors lived long enough to see some of their warnings come true. Together, they give an excellent mental map of the surrender of Europeans to non-European colonizers from the south.

Europe needs a Union for the Mediterranean just like it needs a beheading. Which is, coincidentally, exactly what it might get.

31 thoughts on “The Camp of the Saints meets Eurabia”