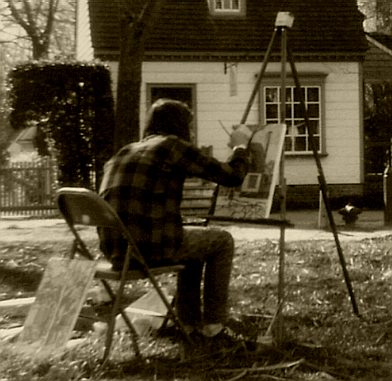 Spring Fundraiser 2015, Day Four
Today is the fourth day of our week-long bleg.

The response has been overwhelming so far — I can tell by how far behind I’ve gotten in my thank-you notes. There are just too many to write in any given day. Our readers seem absolutely determined to keep us afloat.

It’s difficult to find words to express our gratitude for your gifts. In fact, it’s hard to find new adjectives at all. I’ve used up all the superlatives I could think of, and I hate to be repetitive.

So I’ll just say: Thank you!

The theme of this week’s bleg is “Stories”. Tonight’s story (really, a group of stories) concerns one of the careers — the central one, from my perspective — that I pursued before I started blogging the Counterjihad.

For more than thirty years I was a landscape artist, beginning in the mid-1970s, but with an interlude as a programmer for a while in the late ’70s to save up for another stint. Eventually I quit my job and moved out here, and continued painting for another twenty-seven years.

I started keeping a log of my work after my first show, so I know I painted between 400 and 500 paintings during that time. That’s a lot of paintings, and though I never really forget any of them, some of them do slip out of my mind for a time. When I encounter one on somebody’s wall after not seeing it for several decades, I’m brought up short: Oh, yes! I remember the day I painted that one! How hot it was, and how many mosquitoes were biting me…

The general rule in those years was that the paintings I liked the most were the ones that other people didn’t particularly care for. The one below, for example: it was painted down on the flood plain by the river in September 1994. I hauled it outside today to take a photo of it, and then processed the image as best I could to make the colors look right. After twenty years the varnish has yellowed a bit, but this version is not too bad: 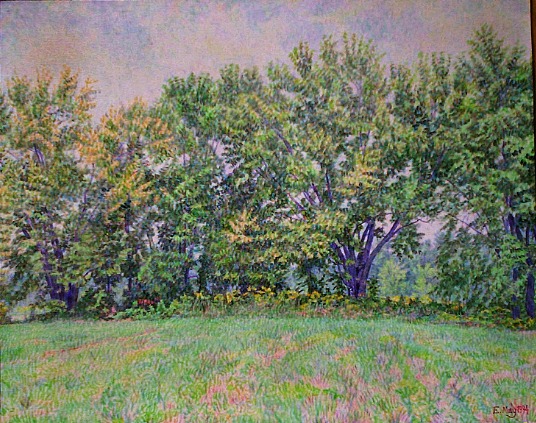 It satisfies me in ways I can’t explain — when I look at it, I smile, remembering those muggy days down by the river, the thunderstorms, the way the vegetation smelled. You could see the yellow coming in early on the trees, as often happens with river maples after a dry summer. The distant line of trees could be glimpsed through a row of maples and choke cherries. The tickseed sunflowers and the Jerusalem artichokes had started to bloom, and the last of the Joe Pye weed blossoms can be seen in the shadows to the left, under the tree.

This painting never showed any signs of selling, so after a couple of years I took it off the market. It hung in my office at work (after Dymphna became ill, I took up programming again) for a few years, and then after I got laid off, it moved up to the Eyrie here in Schloss Bodissey to keep me company in my office.

The next painting was much more popular, and serves as a good example of the type of work customers prefer. It shows Dymphna’s herb bed on the south side of our house in July of 2003. It was the fifth and final version of the same scene, part of a series that continued for about ten years.

I remember those days well, too. My eyes had deteriorated quite a bit by then, and I tended to stay closer to home and sit in the shade when I could.

The paintings most meaningful to me are another matter. They don’t include the ones I sold for more than $1000 — there were only a handful of those, anyway. And they’re not necessarily my best efforts, artistically speaking. What gave them great meaning for me was what they meant to someone else.

The first one was painted in the earliest days of my free-lance poverty. I stayed on in Williamsburg for a while after I graduated, and painted pictures here and there, selling them where I could (and never for more than $50).

One day in March of 1974 I was sitting on the green painting a picture of one of the restored buildings in Colonial Williamsburg. That’s the painting shown at the top of this post; you can see the subject of the painting in the background, and a little bit of the painting itself.

While I was painting, a couple of Catholic priests came by. They had brought a large group of middle-school boys to see the colonial sights, and stopped by to see what I was doing. They were enthusiastic about the painting, and wanted to see it when it was done. I was working in acrylics, which meant that the paint dried very quickly. I asked them to come back in half an hour to see the finished product.

When they came back they were delighted with the painting, and asked me how much I wanted for it. I suggested $40, if they could swing it. They pooled what money they could dig out of their pockets and just barely managed to scrape the total together, most of it in ones. They had no spending money left, but they carried the painting off with them, and were happy.

Now, that was a meaningful painting.

And $40 was a lot of money in those days. I could live off that for couple of weeks.

The next example was in the early 1980s, not too long after I moved out here. I was painting a landscape down by the river, and an old man stopped by to watch me working. He told me that he had had a vision of the Pearly Gates in a dream, and wondered: could I paint them for him? I replied that I could try, if he could provide a fairly good description. He said that he would make a little sketch and bring to my house. I gave him our address.

He didn’t drive, so when he showed up at our house a few days later, his son was with him. The old man had a piece of notebook paper with a crude drawing of the shape of the Pearly Gates. He described the golden color, and the way the light looked, and some other details of ornamentation and so on. He said he knew he wasn’t going to live much longer, and God had shown him what he would see when he reached the other side.

I don’t remember what price I named, but it was fairly low — I could tell the family was not well-off. I worked on the painting for a week or two, and the son brought him to get it when it was done. The old man was very happy; there might even have been tears in his eyes. He turned to me and said, “That’s it. That’s exactly what I saw.”

After he paid me and left, I never saw him again.

Now, that was a meaningful painting.

The final example of meaning concerns a drawing, rather than a painting. In the early 2000s a couple who live not far from us were struck with tragedy when their 18-year-old son died, killed in a car crash. No alcohol was involved — the inattentive teenage driver had been changing the radio station or something, and lost control of the car. Their son was a passenger, and as is so often the case in such accidents, he had not been wearing his seatbelt. He had been the apple of his daddy’s eye, and Wayne was heartbroken.

A few weeks after the funeral, Wayne and his wife called and asked if they could come visit us to show me how they’d like me to help them with their son’s gravestone. Dymphna and I already knew them both: Wayne had done electrical work for us years ago, and his wife was the granddaughter of a woman at our church.

They showed up with some notes and photographs. They wanted an engraved image on the permanent stone marker, one that would combine some of their son’s favorite activities. Wayne Jr. had been an avid four-wheeler, and they brought photos of his vehicle (I remember it had big tires). He used to ride it down to the pond across the road and go fishing, and they brought photos of the pond. They wanted the picture to show the four-wheeler by the pond, and there were certain features in the surrounding landscape that needed to be included.

I drove down to their place and took a look at the scene by the pond, to get a better feeling for what I had to do. Then I went home and started a series of drawings, carefully reproducing the four-wheeler and sketching in the background. The final result was a large pen-and-ink drawing that included all the elements they had requested. When I delivered it to them, there was no charge, of course — I offered my work in memory of Wayne Jr.

The monument company was able to use modern electronic methods and scan the drawing before etching the stone, so that most of the image transfer could be accomplished by automated means. Wayne and his wife invited us to the dedication ceremony when the stone was laid in place over the grave. She was in tears, but happy with the final result. She said it helped ease her grieving heart.

Now, that was a meaningful drawing.

The above anecdotes illustrate the different meanings I drew from all those decades of painting. For years after I had to quit, I avoided remembering those times, because it hurt my heart so much not to be painting anymore. But enough time has gone by now, and I can look back on it as something from long ago.

I knew I was over-clocking my eyes when I did all that. When I went out in the glare of the sun every day for years. When I stared off into the distance at the shimmering horizon. When I looked at the bright white canvas as colors gradually appeared on it.

I wore my eyes out early. I knew that’s what was happening, but I did it anyway, because it was the work the Lord had called me to do. It was worth it.

What I had always wanted to do was to learn how to see. I just had to keep practicing until I could finally see properly. My painter’s prayer was: Lord, give me clear sight, and the wits to copy it right.

And by the time my eyes went bad, my prayer had been answered: I knew what I was doing.

Wednesday’s generosity flowed in from these places:

Thanks very much to everyone who donated. Individual thank-yous will be coming soon.

14 thoughts on “Learning to See”