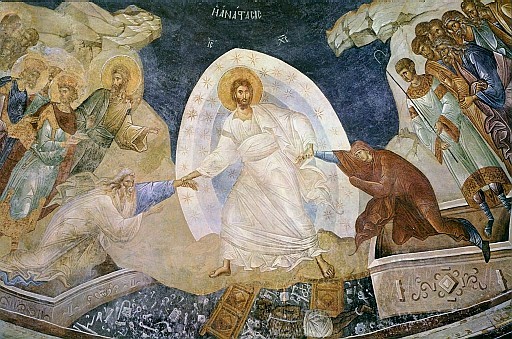 Come, hasten and run, you fleeting feet,
approach the cave, which conceals Jesus!
Laughter and frolicking
accompany our hearts
for our Savior is raised from the dead.

Below is a video of the Easter Oratorio by Johann Sebastian Bach (BWV 249), as performed in 2013 by the English Baroque Soloists and the Monteverdi Choir, conducted by Sir John Eliot Gardiner:

From the video notes:

The image at the top of this post is the 14th-century Anastasis fresco in the parekklesion of the Chora Church in Istanbul (then Constantinople). Below the jump is an explanation of the theological significance of the fresco, from Biblicalia:

This is widely agreed to be the most striking exemplar of the traditional Byzantine Anastasis icon. It is the fresco in the apse of the arekklesion or funerary chapel, of the Monastery of Chora at Istanbul. A brilliant mandorla surrounds the anything-but-dead Christ, in Hell rescuing the inhabitants from Death, who lies bound amidst the shattered gates of Hell and the broken locks and useless keys thereof. The All-Powerful Christ, in midstride, brooking no nonsense lifts the helpless Adam and Eve by the wrist like children, this being witnessed by the older King David and younger King Solomon on the left, with St John the Forerunner behind them. On the right, the Protomartyr (and Prototype of Christ!) Abel watches with his shepherd’s crook, and others of the Old Testament Prophets watch with him.

This is a fine exemplar of the traditional Orthodox Christian composition of the Anastasis, the Resurrection of Christ. This victory over death, the proclamation to and release of the prisoners (1Pt 3.19), is the reason for His Resurrection. We have in this icon a theology lesson rather than a history lesson. Instead of Orthodox Resurrection icons depicting a conflation of events surrounding the Resurrection of Christ as depicted in the Gospels (as in many such Western Christian depictions: the tomb, the winding sheet, the Myrrh-Bearing Women, the sleeping guards, the bright-shining angel), the Resurrection icon presents us with the love of God for mankind, His personal sacrifice, and His personal rescue of humanity from eternal death!

22 thoughts on “Laughter and Frolicking Accompany Our Hearts”