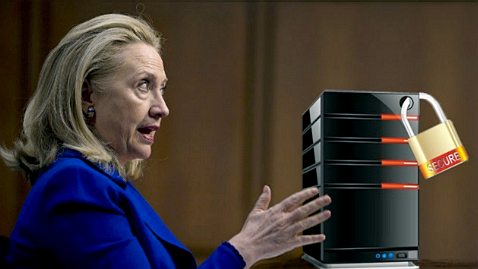 A complete backup copy of Hillary Clinton’s wiped private email server has reportedly been discovered. According to Global Breaking News:

A copy of the private email server that was operated by Hillary Clinton when she was Secretary of State has turned up at a thrift shop in New York City.

A backup server carrying the name “WhitewaterMail” was put up for sale along with various other used items in the “Seconds Remaining” thrift shop, which is next door to the Bill Hillary and Chelsea Clinton Foundation headquarters on the Avenue of the Americas in New York City.

An alert customer named Denbigh Trombauer noticed the name written on a piece of label tape on the back of the device and was intrigued by it. With the permission of the shop owner, he plugged in the machine, attached it to a monitor and keyboard, and booted it up. A quick look at the hard drive revealed that the computer was in fact a backup mail server from Hillary Clinton’s residence in Chappaqua.

Mr. Trombauer had been a volunteer for the Obama campaign during the 2012 election, so rather than call the press, he contacted the DNC. He was eventually put in touch with Mrs. Clinton’s longtime aide and personal companion, Humida Bean. It turned out Ms. Bean had inadvertently carried the server to the shop — at Mrs. Clinton’s request — in a box of miscellaneous material to be donated. The same box also included several pairs of Bill Clinton’s underwear, stuffed animals from Chelsea’s childhood, some old Rose Law Firm file folders, and various other tax-deductible items.

What happened next is not clear. According to a source close to the Clinton Foundation, Ms. Bean simply walked into Seconds Remaining and bought the server, along with a used Arabic-to-English dictionary and an inflatable doll for her husband. She reportedly paid a total of $14 for all three items.

In any case, the backup mail server is now in Humida Bean’s possession. When contacted by a member of Trey Gowdy’s staff on the House Select Committee on Benghazi, she declined to allow congressional investigators access to the server. “It’s mine now,” she told them, “and it’s being used for personal emails between me and my husband. Besides, my employer already went through all those old emails and gave you everything you might need to see. Hasn’t she suffered enough?”

Ambrose Gunweiller, the owner of Seconds Remaining, is calm in the face of all the sudden media attention. It’s not the first time his thrift shop has been the center of controversy: back in the 1990s he made headlines when he sold a tape that allegedly contained the missing 18-minute section that was thought to have been erased from one of Richard Nixon’s Watergate tapes. That sensational tape has never been publicly played.

Some years previously Mr. Gunweiller sold what he said was the mummified body of Jimmy Hoffa to a Chinese buyer for an undisclosed sum. However, an investigative reporter for The New York Post eventually published an in-depth article that exposed the Hoffa mummy as an elaborate hoax.