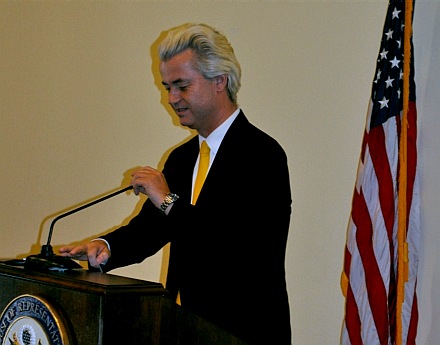 I first met Geert Wilders in person back in February 2009 at an event hosted by Sen. John Kyl of Arizona (now retired) at the Lyndon B. Johnson Room in the U.S. Capitol. Two years later I encountered him again in Nashville, Tennessee under the auspices of the Tennessee Freedom Coalition.

Yesterday afternoon it was my privilege to be invited to another Geert Wilders event, this one a speech and reception in the Rayburn Building on Capitol Hill in Washington D.C. Mr. Wilders had been invited to speak by Rep. Louie Gohmert (R-TX), and was introduced by Rep. Steve King (R-IA).

Before he spoke, Mr. Wilders mingled with the audience and conversed with some of the people who had come to hear him. I was able to talk to him for a couple of minutes, and he told me that he was aware of our work at Gates of Vienna, and was grateful for it. It had been almost four years since I had last seen him, but he looked exactly the same — buoyant, upbeat, and full of optimism, as always.

During his speech he expanded on some of his recent remarks, notably those last week in the Dutch parliament concerning the migrant crisis in the Mediterranean and the “Australian model” for sending the immigrants back. However, it was his opening anecdote that made the most impression on me. It was off-the-cuff, heartfelt, and even more buoyant than his usual statements.

Earlier that afternoon Mr. Wilders had attended a joint session of Congress in honor (I think) of the Japanese Prime Minister. During the course of the event, he was invited by a senator to look in on the Senate chamber (if I remember correctly). In order to do so, his security detail had to stay behind, and he had to surrender his phones.

He chatted with the senator for a while, who then said good-bye and left. Mr. Wilders looked around and realized that he was all by himself, with no idea of where he was. No bodyguards — and no phone!

He wandered down a hallway until he came to an exit, and walked outside into the sunlight, into a beautiful spring day in Washington D.C. As it happened, he was on the opposite side of the building from the door he had entered through, and completely by himself. By himself!

As he said (I paraphrase from memory): “For twenty minutes I was by myself for the first time in ten years. It was wonderful! It was the most enjoyable experience I’ve had in a long time. I was walking around Washington D.C. on this beautiful day with no bodyguards, all alone.”

I hardly need point out that this pleasure would have been denied him had the same thing happened in Amsterdam or The Hague. Geert Wilders’ face is well-known to almost everyone in the Netherlands, and he would have been immediately set upon by passers-by who recognized him and wanted to do him harm. However, in this country he is only recognizable to a few people, most of whom wish him well. As a result he was able to enjoy a few minutes of blissful anonymity until he somehow made his way back to his security detail and resumed his normal existence.

In my brief conversation with Geert Wilders, I told him that in my opinion (which is shared by many others) he is the leader of the worldwide Counterjihad movement — whether he likes it or not. He has earned that distinction by his outspoken, forthright advocacy in defense of Western Civilization and against the encroachment of Islam. His credentials include his place on the Al Qaeda hit list, and the unfortunate fact that he has been unable to live a normal life for the past ten years.

I also said that Lars Vilks has found himself “second in command” for similar reasons. He, too, has had to give up any hope of living a normal life. He has been forced out of his home and must live with 24/7 police protection.

Both men earned their status as Heroes of the Counterjihad by continuing their prominent “Islamophobic” activities in the face of all the threats and intimidation directed at them. Neither of them has retired from public life. They refuse to apologize, or truckle, or “moderate” their public utterances. Despite the death fatwas, they continue to speak out without trepidation on behalf of free expression.

There is a third candidate for a leadership role, and for similar reasons: Tommy Robinson. Like Mr. Wilders and Mr. Vilks, Mr. Robinson has had to give up his normal life, yet continues to speak out for civil liberties and against Islamization. In contrast to Mr. Wilders and Mr. Vilks, however, he cannot rely on the state to protect him, and must manage his security entirely on his own. As a reward for his “Islamophobic” advocacy, he has done two stretches in prison and experienced severe physical abuse at the hands of Muslims while he was inside.

These three men stand as examples to the rest of us, who continue to live (relatively) comfortable lives and follow our normal routines.

But for how long? How many more will join Geert Wilders, Lars Vilks, and Tommy Robinson in the ranks of the outcast and the persecuted?

The Blaze sent a videographer to yesterday’s event in the Rayburn Building, so I assume a video of the speech and the Q&A will eventually be posted online.

Reps. Gohmert and King hosted a press conference with Mr. Wilders on the Capitol steps this morning. Dymphna will be posting about that momentous occasion shortly.

24 thoughts on “Free at Last — For Twenty Minutes”