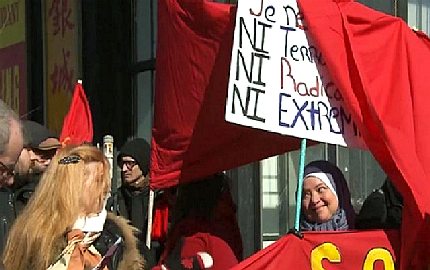 The PEGIDA phenomenon has spread beyond Germany and Austria to Scandinavia, the Low Countries, and other parts of Europe. Last Saturday saw the first PEGIDA march in London, although not many people turned up.

The first PEGIDA rally in North America (that I’ve heard of, at least) was scheduled to be held on March 28 in Montreal, but was cancelled at the last minute after “anti-racists” massed to demonstrate against it. Below are excerpts from a CBC article about what happened:

A march organized by sympathizers of a Europe-based anti-Islam, anti-immigration group called PEGIDA was cancelled on Saturday after hundreds of people showed up to protest against PEGIDA itself.

The self-described leader of the relatively new PEGIDA Québec chapter, Jean-François Asgard, told Radio-Canada that “Islam needs to reform itself or leave the West.”

Jaggi Singh of the No One Is Illegal activist group helped organize Saturday’s counter-protest.

Hundreds of people toting signs denouncing racism and Islamophobia arrived 30 minutes prior to the scheduled start time of the PEGIDA march, set to take place in a largely Muslim community in Montreal called Little Maghreb.

Just over 100 people had RSVP’d to PEGIDA Québec’s march, while nearly 900 members of Antifa (anti-fascism) and other anti-racist groups said they would attend the counter-demonstration.

The anti-Islam group had submitted its march itinerary to Montreal police. A number of officers were on the scene to keep an eye on any violence.

Elsa Schieder of World Truth Summit was there in Montreal for the PEGIDA-rally-that wasn’t, and sends the following report:

First Ever PEGIDA Rally in Canada

That’s what it was — 200 or so angry Communists, and hangers-on. In 3 groups. PEGIDA didn’t show.

The demonstration (rally?) was supposed to be from 4pm to 6pm. I got there around 3 with a friend, Abigail.

We found two groups, one on each side of the road (in the parking lot). One had obvious huge communist banners (hammer and sickle), but the other group also had a couple of signs that had a sort of communist look to them. I talked with them — Trotskyites.

The two groups were going to unite, but were apart at the start, because they had differences with each other (according to a Trotskyite).

An army of police officers lined up facing the smaller group. Maybe 50 cop cars in a group in the parking lot. Riot police were around the corner, about eight people dressed up as if for Star Wars, one holding something that looked like a futuristic gun.

We hung around, kept hunting for anyone associated with PEGIDA — found an Islamic center with maybe thirty Muslim men hanging around outside it.

No people (or almost none) who looked like regular people.

Abigail asked one of the demonstrators (from a third group), “Are you a student?” The answer: “No, I’m a revolutionary worker.”

“Where are the PEGIDA people?” I asked a couple of people. “Are you a fascist?” was the answer.

“Are you a fascist?” it came again.

Someone else called her a Zionist fascist — meaning they knew she was Jewish, so she got the double name-calling.

We kept circulating. The police seemed friendly, but did not want anyone in the road — you had to be on one side or the other. Makes sense, if you’re afraid of clashes in the road.

We got into the car, but circled the shopping center where the demonstration was supposed to take place, just to see if we could find even a hint of PEGIDA.

I’m glad we went. It was interesting to see the people who were ready, quickly, to come and chant.

And then the question: Who pays this piper? Of whoever leads the group, who gets some money?

Not Putin — Russia is no longer a Communist force. Don’t think it’s China.

I’m very glad to have been at the PEGIDA event that did not happen. It made total sense that PEGIDA chose not to meet a couple of people ready to rage.

7 thoughts on “Communists Against PEGIDA”