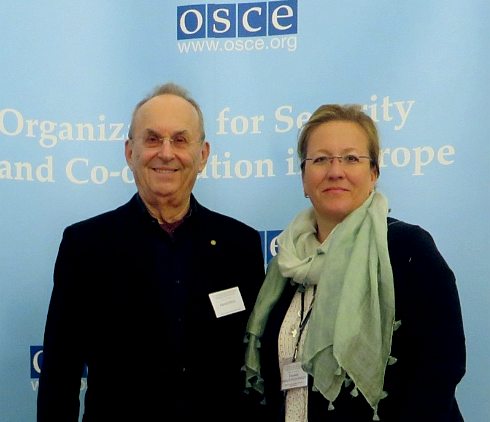 For the past two days the Organization for Security and Cooperation in Europe has hosted the “Supplementary Human Dimension Meeting on Freedoms of Peaceful Assembly and Association, with Emphasis on Freedom of Association” at the Hofburg in Vienna . Harald Fiegl and Elisabeth Sabaditsch-Wolff were among the participants at today’s conference.

From the prospectus for the event:

Below is an intervention read by Elisabeth Sabaditsch-Wolff on behalf of Bürgerbewegung Pax Europa at today’s plenary.

Are we already losing our freedom of assembly?

It is with significant concern that Bürgerbewegung Pax Europa has followed the developments in freedom of assembly in several OSCE Participating States over the last decade. Propaganda from extremist groups, violent street confrontations and lackluster enforcement of relevant laws is leading us to the conclusion that freedom of assembly is under severe pressure, as compared to a decade or two ago.

As mentioned, this is a problem in several OSCE Participating States. Examples from Sweden, Denmark, Great Britain, Germany, Austria and more show that in particular left wing extremist, and to some extent Islamist, groups, are granted undue opportunities for intimidation, threats and open violence against public manifestations held by groups they disagree with. This is leading to a hardening of the environment for public manifestations, discouraging participation by the average citizen, and creates undue security challenges for organizers of fully democratic and peaceful public events.

There are many examples of organized terrorism against peaceful assemblies:

This is a problem with several aspects. One of them is that when public events face threats of attack from extremist groups, the threatened events frequently find themselves in difficult situations due to demands made by police authorities. Police in several countries apply a variety of methods to diminish the visibility of the threatened events, an approach that is at odds with fundamental OSCE principles for freedom of assembly. These methods include police doing the following:

Another problem is that of ‘counter-demonstrations’, which in many cases serve as rallying points for radical activists intending to physically assault the primary demonstration. One such case was the demonstration for democracy and against Sharia in Århus, Denmark on March 31st 2012, where hundreds of participants from the counter-demonstration laid siege on the main demonstration. Effective police effort prevented almost all direct assaults on the demonstration, but the situation was far from what is desirable in a democracy, namely that unarmed citizens have the right to assemble and express their concerns without having to fear being assaulted.

While the people organizing such counter-demonstrations have an equal right to assemble and express their differing views, they do not have the right to intimidate, threaten and assault the primary demonstration. Freedom of assembly means the freedom to peacefully express a variety of views, not freedom to provoke street battles or destroy events of others.

This regretfully happened to our event in support of persecuted Christians in the Middle East, held in Stuttgart, June 2011 (related to the “Support Israel” event mentioned above). While it was possible to hold a few brief speeches, the assault by hundreds marching under waving banners entirely destroyed the original intention of music and speeches in support of persecuted Christians.

The topic of counter-demonstrations is intricate, for at first glance, they would seem to be protected by the freedom of assembly principle we are working to uphold. However, if such events are used to attack the freedom of others to assemble peacefully, they are no longer protected by this principle, and can be considered by the authorities as attempts to undermine this freedom. The currently established principle that counter-demonstrations are to be permitted near the demonstration they are against is problematic, for this increases tension, anger and confrontation, and decreases the chances of having what really matters, peaceful assemblies expressing citizens’ concerns.

If the result of threatening counter-demonstrations is that less muscular citizens refrain from participating in public assemblies, freedom of assembly has taken real damage. Thus, there is a need to protect the primary demonstrations not only against actual violence, but also against threats and intimidations that make public rallies seem fit for muscular, fighting types only. Freedom of assembly must be for everyone, weak or strong, singers as well as fighters.

It is the opinion of Bürgerbewegung Pax Europa that this principle should be reconsidered, in order to restore the right to peaceful assembly currently under threat.

12 thoughts on “Are We Already Losing Our Freedom of Assembly?”