JLH has prepared a report on the latest and most serious instance of ideological conflict within the AfD Party in Germany. 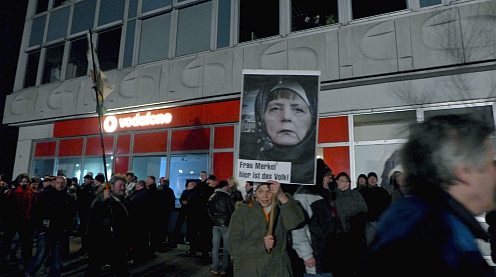 And Never the Twain Shall Meet?
by JLH

Kipling had it figured out: Oh, East is East, and West is West and never the twain shall meet…

The acting head of the AfD party (Alternativ für Deutschland — Alternative for Germany), a native of Hamburg and the party’s representative to the EU parliament, attacks the AfD chief in Thuringia who has suggested a more “rightist” direction for the party. To bring it a little closer to home, just imagine that Ted Cruz is from East Germany and Karl Rove from the West.

A previous “one-theme” party of great interest to counterjihadists — Die Freiheit — was riven by the results of its internal elections, causing the desertion of many of its leading moderates, and never passed the electoral threshold to enter the Bundestag. AfD, founded by the economist Bernd Lücke, was also an apparent one-theme party — anti-euro — and made it the first time, with its greatest show of electoral strength being in the east, i.e., the old GDR.

Then PEGIDA happened and it developed that some AfD members were supporting it.

The head of its Thuringia branch recently issued an “Erfurt Resolution” decrying attacks from some in the western section of the party and calling for more attention to the fact that they were elected to be different from the established parties, closer to the people and more patriotic.

Below is the resolution, followed by its repudiation by one western party officer, then the reaction to the reaction and finally reactions from other party leaders.

This internet site, which was initiated by the two state [provincial] heads, (Thuringia) and André Poggenburg (Saxony-Anhalt), serves as a coalition instrument inside the AfD. The first action of this site is to publish the “Erfurt Resolution.” It was presented in the Thuringian party congress in March 14, 2015. The first signatories include office-holders of the AfD from nine federal states. Here is the text:

The project “Alternative for Germany” is in danger. We have had glittering electoral successes in the past year, but we are on the verge of squandering the confidence the voters have placed in us.

The citizens voted for us because they hope that we are different from the established parties — more democratic, more patriotic, more courageous. But now, instead of the alternative we promised, we are becoming more and more comfortable with the political enterprise — the world of technocracy, cowardice and betrayal of the best interests of the country.

In our political actions, we have been concentrating timidly on the areas indicated for us by institutions, other parties and media, rather than setting our own boundaries and expanding them. We too often display that overeager obedience which does not change, but hardens, the situations we set out to oppose.

The AfD could credibly and knowledgeably communicate to citizens its democratic concern with those problems that are never directly addressed. The original signatories to the Erfurt Resolution believe the AfD’s exemplary success is threatened by unnecessary limitation of the its political range. By doing that, we lose what represents our raison d’être.

The original signatories of this resolution see a fatal signal here. That is, the provocative alteration of the AfD to a technocratically-directed party threatens the compromise arrived at — with enormous self-discipline on the part of those participating — in the run-up to the Bremen conference.

Despite all efforts to narrow its focus, countless members of the AfD still see it

Disappointment over the AfD’s failure to acknowledge a fundamental political turn (Wende) in Germany is palpable in all of our associations (and above all in the East).

The original signatories call upon each AfD member who supports this resolution to sign it. The goal is the gathering of all forces in the AfD who are intent on a genuine alternative to the existing parties.

And from Junge Freiheit:

Discord in the AfD: Henkel Warns Against An “Ethnic Mindset”

Disagreement over the direction to be taken by the AfD is coming to a boil. After publication of the “Erfurt Resolution,” AfD acting spokesman, Hans-Olaf Henkel, blasted those responsible and suggested they change parties. Their spokesman, Thuringian AfD head, Björn Höcke, is outraged and demanding a reaction from the national party.

Berlin: Over the weekend, the acting head of Alternative for Germany (AfD), Hans-Olaf Henkel sharply criticized the “Erfurt Resolution” given out in Erfurt. “This declaration is not only grotesquely formulated, it is full of inconsistencies and to some extent turns the facts upside down.,” Henkel said to JUNGE FREIHEIT.

The party’s MEP (member of EU parliament) cautioned that the resolution was oblivious of how damaging “pot shots from the East” were on the results of polls and elections in the West. Voters who had voted AfD in the European election had been frightened by such statements and therefore had gone back to voting for the FDP [Free Democrats] criticized the former head of the BDI [Federation of German Industry]. The same effect could be seen in national polls.

“If we want to stay successful, then it [can be] only as a true party of the people and not a sectarian extreme right party that is reduced to an ethnic mindset and accepts xenophobia in the guise of opposition to widespread “political correctness.” A party constructed according to the tendency of the Erfurt Resolution would have — with the possible exception of Lower Saxony — no chance in any of the western federal states, or in the Federal Republic as a whole,” Henkel warned.

He also didn’t need “coaching on ‘Courage Under Fire’[1] from anyone — certainly not from people like this, who only talk about what is happening instead of what the point is.” In Henkel’s opinion, there are plenty of leftist populists in other parties, and the Republikaner and NDP[2] had always satisfied the “need for right populist rabble-rousers.”

The Erfurt Resolution authored by AfD state chiefs of Thuringia and Saxony-Anhalt, Björn Höcke and André Poggenburg, was announced on the Sunday of the state party conference in Armstadt, Thuringia . In the opinion of the signatories, the party is in danger of losing its character as an alternative to the established parties through a continuing accommodation to the political mainstream.

Henkel repudiated the reaction. “Neither Bernd Lucke nor I have to listen to Mister Höcke telling us that we are allegedly too cowardly to open our mouths. Accusing us of ‘overeager obedience’ is downright absurd. If the party is damaged and voters and members offended, it will be by such insane attacks.”

He had learned this in the Hamburg election campaign, where he was repeatedly addressed critically concerning the relationship of AfD in East Germany to “‘Pegida, Legida, Kögida’ and ‘Putin worshippers’ and ‘Schlieffen plans’[3] from the East.” Several “wild-eyed ethnic ideas and a primitive anti-Americanism” were of special concern.

“With the exception of Bernd Lucke, hardly anyone was as engaged as I in the election campaigns in the East German states. And we learned over and over that, especially in the middle class — small business people and manual workers — there was a great interest in all the themes we stood for, not just those which can be better presented by the Republikaner and the NPD, as the resolution implies.” It was unfortunate that when it came to this resolution “the first reasonable people in the party turn their backs.”

Henkel recalled that he had for years been critical of the excessive growth of Islam, “more than others in the party,” that he had suggested adopting the Canadian point system in the Europaprogram[4] and he saw no contradiction between “readiness for reform” and “liberal” and “conservative” and “national.” “We must only take care that we preserve what is right and reform what is necessary. That was exactly what the AfD guidelines expressed.”

You had to wonder, said Henkel, whether some people catapulted into the limelight by election results had let success go to their heads. Anyone who took positions and gave opinions that lie outside the guidelines decided by the overwhelming majority of the AfD grassroots would be better to sick to internal dialogues than to speak out.

“If they no longer agree with the AfD program, there would still be the alternative of choosing another party, instead of trying to split the AfD. And I could give them a suggestion about where they would be more comfortable…”

At any rate, according to Henkel, the resolution has a good side. “The process will lead to a clarification and will show that only a minority of the party supports positions like those of the Erfurt Resolution.”

Höcke reacted with incomprehension to Henkel’s attacks. “Henkel’s attack is very close to ad hominem insult. With no reference points, it says nothing about the resolution but a great deal about him,” says Höcke, and demands a reaction from the national party.

Henkel’s comments suggested that he had not really read the resolution, opined the Thuringian AfD chief. There was no other explanation for accusing the initiators of planning a “sectarian extreme right party.”

“The Erfurt Resolution does not intend to split, but to unite. Its intent is to help in overcoming party infighting. That is exactly why it does not separate the party into liberal and conservative, but into established and alternative,” Höcke explained. “It calls for the AfD to stay true to its firmly established task of renewal.”

It was also too bad that Henkel repeatedly spoke of the eastern organizations of the AfD in disparaging tones. “It would never occur to me to publicly call any opinions in the party ‘wild-eyed’ or ‘primitive.’ The ‘Know-It-All Wessi’ type seems not to have died out yet.”

He himself had grown up in the West, said the Thuringian AfD head, but today he thought “that people in the East — based on their historical experiences — are more sensitive to undesirable developments.”

To his knowledge, none of the original signatories of the Erfurt Resolution had demanded excluding or isolating members because they were too liberal. “An MEP suggesting that the leader of a parliamentary delegation leave the party is strong stuff, to which the national leadership must react.”

On Monday, AfD head Bernd Lucke[5] warned the party against infighting, but retained some distance from the Erfurt Resolution. “There will not be another AfD, because the success of the AfD is firmly tied to the political goals found in our programs and guidelines,” he emphasized to JUNGE FREIHEIT.

Then on Tuesday, co-spokesperson Konrad Adam joined the debate. If the AfD wanted to stay together, it had to overcome the gaps between East and West, he told this paper. “It is not just pot shots from the East, but heated answers from the West, and it is not clear yet which one is doing more damage,” he said.

To really play its role as a new major party, the AfD would have to reflect the breadth of the population. “And that includes not only robust resistance against the failed policy of preserving the euro but also the concern about the consequences of unregulated immigration,” he said.

Historical note: the five “new federal states” that had been the German Democratic Republic are Brandenburg, Mecklenburg-West Pomerania, Saxony, Saxony-Anhalt, and Thuringia. For the purposes of reconstruction, including creating an administrative structure from the ground up, each one of them was originally (1991) “paired” with West German states:

22 thoughts on “And Never the Twain Shall Meet?”