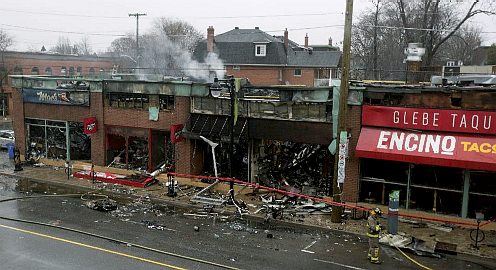 Late in the evening of April 9 — last Thursday — a building in downtown Ottawa blew up. The structure at the corner of Fifth Avenue and Bank Street contained several retail businesses, and broken glass from their display windows blew out into the street when the blast occurred, injuring a passerby. Firemen took several hours to extinguish the resulting fire.

By a stroke of good fortune, no one was seriously hurt. The injured passerby was able to talk to the media at the scene the following morning, and no firemen sustained serious injuries.

The official follow-up to the incident provides a useful compare-and-contrast with the Cedar Avenue fire and explosion in Minneapolis on January 1, 2014 (see the Cedar Avenue archives for all the detailed information, and “Ember Days” for the summary).

Below are excerpts from an article about last Thursday’s explosion published by The Ottawa Citizen. Relevant passages have been bolded in red for further attention:

The Ottawa police arson unit has deemed Thursday night’s fire in the Glebe, which destroyed an entire commercial building at Bank Street and Fifth Avenue, an arson.

Sgt. David Christie of the Ottawa police arson unit said the priority Saturday was to bring in heavy equipment to tear down the exterior walls of the brick building before investigators could move further inside the structure.

After removing some of the walls and support beams to avoid collapse, investigators were able to make their way inside. Once inside they will analyze fire patterns, remove debris and take samples.

The core of the investigation is around the middle of the complex where the Beaver’s Mug Café and Silver Scissors hair salon sustained most of the damage. Investigators were seen climbing over cables and strewn rubble inside the gutted spaces exposed to the afternoon sun given the roof was torn away in the explosion and blaze.

“The fire patterns that are visible obviously just from the street and from inside would indicate there was some sort of explosion,” said Sgt. Christie, who said they are treating the file as a criminal investigation. “What the cause of that was? That’s what we’re working on now to determine if that was an accelerant or some other reason for that.”

He said the building will be demolished once the investigation is complete. But how and when will be up to the insurance company.

The brick outer wall of the structure on the southeast corner of Bank and Fifth Avenue is still standing, but little else is. With the roof gone, many interior walls have collapsed, and some rows of framing lumber lean over, half-fallen.

It will be Peter Hamilton’s job to sort all this blackened confusion into a pattern that makes sense, answering the basic question: What started it?

He hasn’t begun to answer this yet.

“Everything is on the table with respect to how the explosion transpired,” said Hamilton, an investigator from the Ontario Fire Marshal’s office.

“We are currently in the process of rendering the scene safe,” he told reporters. “We can confirm that there has been an explosion.”

There had been at least one explosion — confirmed by firefighters now — and witnesses say there were others.

Fire crews worked through the night, finally bringing the blaze under control around 4:30 a.m., but not before it had gutted a stretch of businesses that included a Mac’s Convenience store, a Silver Scissors hair salon, Brown’s Dry Cleaners, Beaver’s Mug coffee shop, Pizza Hut and Encino Taco Shop.

Hamilton, the investigator from the Ontario Fire Marshal’s office, arrived at the scene around midday Friday, but said it would be Saturday at least before he entered the building.

“The heavy equipment will be here (Saturday) morning,” he said. These machines will pull down structures that are not secure — walls and remaining pieces of the roof — before investigators can go in.

“There’s a number of vertical elements there that are still upright but need to be removed,” Hamilton said.

He expects about five investigators to work on the job, and wouldn’t estimate how long it will take.

The Ottawa police arson squad visited the scene Friday, and Hamilton was asked whether he is considering arson as a possible cause.

“Everything is on the table,” he repeated. “You can well imagine that we’re on the outside of the scene and we’re looking in just like everyone else. So we need to do understand everything.”

“Once we’ve done our job, the insurance companies will be working with all of the individual units” and work out the value of the damage.

He wouldn’t say whether the whole structure will have to come down.

Notice that the only demolition planned for the structure is that which is necessary to further the arson investigation. The investigators intended to “tear down the exterior walls of the brick building before investigators could move further inside the structure… Once inside they will analyze fire patterns, remove debris and take samples.”

Contrast their procedures with what happened at Cedar Avenue, where the building was totally demolished and the rubble hauled away as soon as the fire was out. As recently reported by Judicial Watch:

In his January 10, 2014, report, Deputy State Fire Marshal Investigator Ronald C. Rahman admitted, “I did not retain any evidentiary artifacts from the scene.”

Why wasn’t Mr. Rahman prosecuted for official malfeasance or dereliction of duty, or some similar crime?

In Ottawa they do things differently: “He said the building will be demolished once the investigation is complete. But how and when will be up to the insurance company.”

No rush to demolish, and the insurance company has a say. Why didn’t that happen in Minneapolis?

And no instant announcement that a “gas leak” was the cause: “Everything is on the table with respect to how the explosion transpired,” said Hamilton, an investigator from the Ontario Fire Marshal’s office.

That doesn’t mean that no cultural enrichment was involved in the blast. A reliable Ottawa resident of that area who is well familiar with the location of the fire informs us that the people seen working regularly at the Mac’s Milk store (the corner business of the destroyed block) were very observant Muslims, based on their clothing, facial hair, and so on. He says everyone he ever saw behind the counter was a religious Muslim.

So it’s entirely possible that kinetic activists handling culturally sensitive incendiary materials were inadvertently responsible for bringing the building down. If so, however, they were either not present at the scene when it blew up, or managed to scarper safely out the back before emergency service personnel arrived.

Regardless of what the cause of the explosion is eventually determined to be, Ottawa authorities are to be commended for conducting their investigation according to the book. Just think — public officials acting with probity and diligence in the performance of their duties! How refreshing!

Sad to say, it’s a far cry from the way business is done in Minneapolis.

3 thoughts on “A Fiery Midnight in Ottawa”