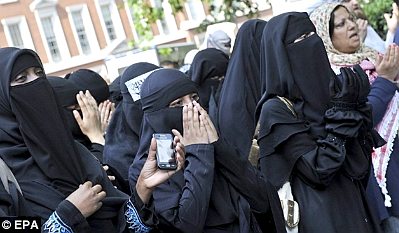 Will Quebec join its francophone cousins in Europe and ban face-covering veils? According to TVA Nouvelles, that may well be in the cards.

The following translation by C.B. Sashenka originally appeared at Vlad Tepes in a slightly different form:

Secularism: Quebec Wants to Ban the Wearing of the Full Islamic Veil

[Quebec Premier] Couillard promises a plan of action and a law

The Quebec government will legislate on secularism by the summer to ban the wearing of the full Islamic veil for officials in contact with the population, as well as for citizens in public administration, an unprecedented measure in Canada.

The law on “state neutrality” should remind us of our “fundamental individual rights” that apply in this province, said Quebec Premier Philippe Couillard during a recent interview with AFP.

“It will be proposed that both the person providing a public service and receiving it must have their faces exposed for communication, safety and identification purposes.”

The Liberal leader, elected with a large majority last April, notes that this will apply to both public service and municipal government.

This enforcement action will prevent the wearing of the full veil (niqab or burqa) by employees or users of the administration.

“It’s the least the government could do. The expectation of citizens was high to ensure that the state decides on its relations with the religious,” considers Jocelyn Maclure, a philosophy professor at Laval University in Quebec City.

“It’s surprising that this has not yet been done.”

“We aim to table the bill by June,” said Mr. Couillard, a bill that will also include a component to constantly maintain open dialogue with ethnic and religious communities.

Echoing this debate, Canadian Prime Minister Stephen Harper said Tuesday that the niqab is “rooted in an anti-woman culture”, justifying the federal refusal of the full veil for Canadian citizenship ceremonies.

By breaking down the issue of religious symbols in the public sphere to that of the uncovered face, the Quebec government “presents an objective fact that has nothing to do with religion,” says Pierre Martin, a political scientist at the University of Montreal.

“It’s a way to disguise the message in a positive way in order to target a certain religious group,” that is, Muslims.

“If indeed the various religious symbols of state employees will not be targeted, there will be great disappointment within the population,” agrees Mr. Maclure.

An ethics specialist, the philosopher describes keeping the crucifix above the seat of the President of the National Assembly of Quebec as “disappointing” and “not serious”.

“Nobody believes that Quebec is a religious state,” Mr. Couillard justified.

This law follows a decade of controversy over the relationship between the Quebec government and certain minorities. The Prime Minister also intends to impose a “framework of reasonable accommodation”, a principle that allows minorities to obtain waivers and exemptions in the name of their religious customs or orientations.

These measures are consistent with what Mr. Couillard said the night of his election on April 7th 2014. Strictly opposed to Quebec’s secular charter of values that was proposed by the outgoing separatist government, he announced that legislation would be “rapidly” introduced, and would focus on the “uncovered face and the issue of state neutrality.”

The positions of the Parti Québécois (PQ) separatists are much more clear-cut than those of Mr. Couillard’s Quebec Liberal Party (PLQ) regarding the issue of identity; and with this reform, the government “wishes to remove this issue from the PQ, an issue that will be appropriated with the election of the PQ’s new leader (in May),” notes Peter Martin.

Poll favorite to become the next Quebec separatist leader, billionaire Pierre-Karl Peladeau has “no comments” on government initiative, his associates told AFP on Monday.

Last fall, Canada experienced two Islamist attacks, in the south of Montreal and in Ottawa; and along with the shootings that bloodied France and Denmark in the last two months, “the PLQ (Quebec Liberal Party) had an obligation to show performance, it’s clear that the Canadian and European events created a sense of urgency,” Mr. Maclure believes.