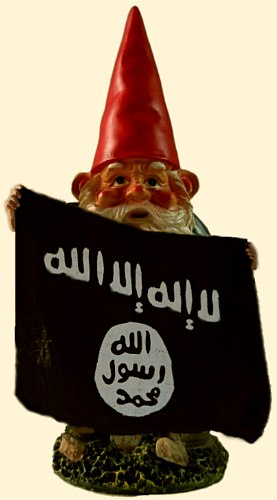 The translator of this musical propaganda video in French says the singing of the Islamic State Butchershop Quartet sounds like the Vienna Girls Choir to her. But I’m convinced that it’s actually a chorus of garden gnomes who have switched their principal occupation from fishing to jihad.

Vlad watermarked the video with one of those falsetto soprano homunculi, Mehmet bin Mohammed. Watch the top left corner, and you’ll see him. His cousin Mahmoud the Gnomon from Oman is at the top of this post.

Many thanks to Oz-Rita for the translation and annotation, and to Vlad Tepes for the subtitling and additional annotation:

It’s nice to take a break from all the nastiness and grotesquerie and make fun of this stuff. But really, that’s just the way we whistle past the Islamic graveyard, which is stuffed full of sick horror 24/7. What else can we do?

Vlad has a few words to say about all this:

The dilemma that many Western leaders as well as Youtube and some other significant and influential people and organizations seem to be struggling with is whether or not to allow the publication of Islamic State or other jihadi materials online.

I certainly share the discomfort at some levels but not at others.

If we look at a country like England, which has a population of over fifty three million people, and then look at the number of residents in that country that have left to join jihad overseas or indeed decided to undertake jihad at home, and then remove the people who would have done it anyway without seeing any propaganda online but was either already an observant muslim or attended a mosque in which jihad was a central dogma (which would be close enough to all of them to say pretty much all of them) and then take the remainder which were ‘radicalized’ by online jihadi propaganda and, then to be 100% fair to the other side, multiply that number by say, 300, figuring that the governments probably hide from us just how many muslim converts actually do try to join the IS or wage jihad at home.

Now lets take that number, and again, to be fair lets call it high and say its 10,000 people.

I do not have the real number handy but I am pretty sure it’s less than half of that and maybe less than a tenth. At least officially.

Then look at the comments under any article about Islam, where they are still allowed at least, and compare them to comments on the same subject from 10 years ago and we see that when people are allowed to see the real ideology of islam and the actions it generates, the overwhelming majority of the population will be utterly repulsed by it and the feeble few, one in fifty three hundred if we accept my very high estimate for the easily influenced towards the enemy, is a tiny price to pay. My guess would be more British people joined the Nazis than that by proportion.

So I feel it is very important to make sure that what they say and do is seen by us to reduce the number of ‘useful idiots’ shilling for the jihad under the guise of political correctness or ‘anti-racism’. This however, does not mean we have to present their material respectfully. Truthfully yes, accurately, yes. But respectfully? Not on my watch.

7 thoughts on “The Singing Gnomes of the Islamic State”