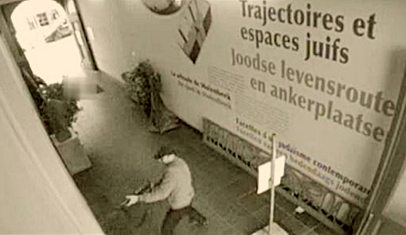 The following opinion piece by Kurt Kotrschal was published last month in the Austrian daily Die Presse. Many thanks to JLH for the translation:

Is Europe Exchanging its Jews for Muslims?

The renewed persecution of Jews in Europe is contrary to our central values, enlightened thinking and liberalism.

A preacher in Saudi Arabia announces that the earth is standing still. Here, masses of books are being given away, whose manipulative mix of science in the style of creationism attempts to prove that Charles Darwin was mistaken. For instance, “The Evolution Scam” by Turkish writer Adnan Oktar. “Wacky” is all you can say.

Now, the Islamic State is on a massive killing spree of “infidels” in the name of the above-mentioned author’s Islam, and he denies not only evolution, but the Holocaust. He is happily spreading the well-known theories of a Jewish-Freemasonry global conspiracy against Islam. And of course the American CIA arranged 9/11 itself so it would have an excuse for a western crusade against Islam. Unfortunately, such ridiculous ideas are believed by many Muslims all over the world, including in Europe.

The nucleus of every liberal-enlightened and democratic state is the separation of belief and knowledge, of religion and the state. This is alien to the Islamic system. To be sure, Islam is a part of Europe now, but many Muslims have not yet “arrived,” because they neither understand nor accept European fundamental principles. A little integration is not enough, especially since 70% of domestic imams reject and torpedo it. To really “arrive,” Islam must enlighten itself.

All across Europe, Islamic and radical right-wing scum are strangely allied in their belief in the worldwide Jewish conspiracy. So we shouldn’t be surprised that the persecution of Jews is hitting its stride again. The exodus from France is only the tip of the iceberg. Anti-Semitic insults and smears have long since become “normal” again — including in Austria. The threshold for physical violence is sinking steadily. Smug European citizens look the other way (in irritation?) — like that other time in Vienna when Jews were allowed to clean the streets with toothbrushes. And the oh-so-humane Left chants anti-Semitic mottos in their demonstrations against Israel, but say nothing about this new mega-scandal.

With the driving out and annihilation of Jews, Vienna lost its cultural and economic backbone, and the university its brilliant scientific reputation — probably one of the most long-lasting depredations of Nazi rule. That may sound like Semitophilia, but considering the lack of an Islamic cultural-scientific contribution to European civil society, it’s a simple statement of fact.

The renewed persecution of Jews in Europe is contrary to our central values, enlightened thinking and liberalism. It is an alarming symptom for a Europe in decline. In the face of our skepticism about whether freedom of speech will survive through insult, let’s forget for now whether we all “want to be Charlie.” But it is high time that we are all Jews. Je suis Juif. No If, And or But.

(Kurt Kotrschal is a zoologist at the University of Vienna and director of the Konrad-Lorenz Research Facility in Grünau.)

30 thoughts on “The Judenrein Future of Eurabia”