The town of Bolton lies in what used to be the industrial belt of northwestern England. It was a part of Lancashire when I lived in England back in Harold Wilson’s time, but all that has changed — it now seems to be in Greater Manchester. In those days I lived in Yorkshire, which was a traditional rival (if not enemy) of Lancashire. However, when facing off against the “bloody Southerners”, not to mention the Welsh, the Scots, or those wogs across the Channel, the two counties were like brothers.

Back then Bolton was still largely without cultural enrichment. The Pakis, as they were commonly known in the age before PC, had begun their incursions into Bradford and its suburbs, but most of the old industrial towns in the region were still largely inhabited by the English, with some outlanders from Wales and Ireland. Yet in 2014, not only was there a chemistry teacher by the name of Jamshed Javeed at Sharples High School in Bolton, but his life’s dream was to travel to Syria and wage jihad in the way of Allah for the Islamic State. 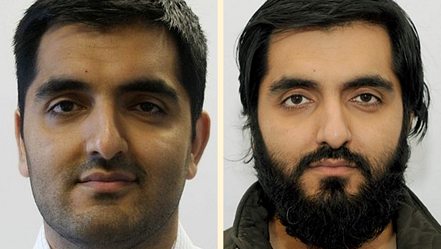 The before-and-after photos above show Mr. Javeed’s jihad transformation, from a clean-cut reputable young man with a responsible job into a disheveled and hirsute mujahid. Kind of like a hippie in the old days, but without as much emphasis on peace ’n’ love.

The following two articles describe the trial of Jamshed Javeed in Woolwich Crown Court. Neither of them leaves JIM entirely unmentioned, but the first one, from The Bolton News, is more forthright in its acknowledgement of the religious and ideological motives behind the defendant’s desire to join a terrorist group in the Middle East.

Notice that the prosecutor felt compelled to insist that Mr. Javeed’s intended actions were “not… about the religion of Islam”:

A CHEMISTRY teacher who planned to travel to Syria to fight alongside Islamic State prepared himself to commit “multiple acts of murder”, a court has heard.

Sharples High School teacher Jamshed Javeed was among a group of young Muslim men who became radicalised and “determined to fight Jihad” in 2013.

The 30-year-old helped his younger brother Mohammed and two other men join the terrorist group, also known as Isis, in Syria by providing money for flights as well as clothing and equipment, Woolwich Crown Court in London was told today.

Javeed is then said to have prepared to travel to the country with another member of the group, Nur Hassan, to fight with Isis and their fellow Britons against government forces.

In November 2013, he bought clothing, equipment and flight tickets but he was stopped from travelling by his family, who hid the clothes he had prepared, along with his passport.

Javeed, who is married with a young child, pressed ahead with his plans despite the pleas of his wife and family not to go, prosecutor Simon Denison QC told the court.

He said: “He persisted, buying more clothing and equipment to take with him for himself and others, and applying for a replacement passport.”

The teacher, from Levenshulme, Manchester, was arrested in December 2013 and police found material on his mobile phones and computers providing evidence of a “violent Islamist ideology” and his “intention to engage in acts of terrorism in support of that Islamist ideology”.

Javeed, who taught 11 to 16-year-olds at Sharples, pleaded guilty last year to two counts of engaging in conduct in preparation of terrorist acts.

He accepts he intended to travel to Syria to join rebels against the “vicious” Assad regime but in a basis of plea he claimed he has never supported “the aims of Isis as now revealed and understood” and insisted he is not an extremist.

Mr Denison said it was clear the action Javeed intended to engage in “would have involved the use of firearms and/or explosives”.

He said: “This case, of course, is not about who is right, and who is wrong, in the conflict in Syria — as if anyone could say.

“It is not about humanitarian aid. Nor is it about the religion of Islam.

“It is about the defendant assisting others in preparing, and preparing himself, to commit multiple acts of murder in guerilla warfare to advance their religious or ideological cause.”

The sentencing hearing is scheduled to last two days. […]

The BBC is more reticent in its approach. Although it mentions “jihad”, the “jihadist mindset”, and “jihadist ideology”, its only reference to Islam is the name of the Islamic State:

A chemistry teacher who was poised to travel to Syria to fight with the group that became widely known as Islamic State has been jailed for six years.

Jamshed Javeed, from Manchester, was “determined to fight jihad” despite pleas from his family not to, Woolwich Crown Court heard.

Javeed, 30, who admitted terror offences, claimed in court he wanted to go to support ordinary Syrians.

He was arrested in December 2013 hours before he was set to leave the UK.

Javeed, a teacher at Sharples High School in Bolton, had been preparing to leave his home on Cringle Road, Levenshulme, after helping his younger brother Mohammed make the trip to Syria.

The teacher’s relatives initially foiled his plans by hiding his passport but he persisted even after learning his wife was pregnant.

Police found £1,490 in cash, thermal gloves and combat-style trousers in a rucksack during a search at his home.

At an earlier hearing, Javeed admitted two counts of engaging in conduct in preparation of terror acts but insisted he was travelling only to support the people of Syria, not to join Islamic State.

But in sentencing him, Judge Michael Topolski said he was “not satisfied” Javeed had rejected “Isis’s ultimate aims” and believed he remained “adherent to a violent jihadist mindset” and considered him “dangerous”.

He said by autumn 2013 he had “become sufficiently radicalised and committed to a violent jihadist ideology that you were part of a group of young men determined to travel to Syria to join Isis and to fight and die for them”.

Judge Topolski said: “I find that you were not planning to return to this country… but rather to die, if you could, as a martyr.”

He said Javeed played an “important role” in enabling his younger brother and three other men to travel to Syria to fight.

“One of those young men is now dead. The other three are effectively missing.”

Speaking after sentencing, Det Ch Supt Tony Mole from Greater Manchester Police said: “Javeed was an otherwise law-abiding man who had a responsible job, a child and another one on the way.

“However, from August last year both his appearance and behaviour started to change and in a short space of time he started to support the Isis cause and those planning to travel to Syria.

“He had bought equipment to take with him and had given money to help others travel there.”

11 thoughts on “The Jihad Transformation”