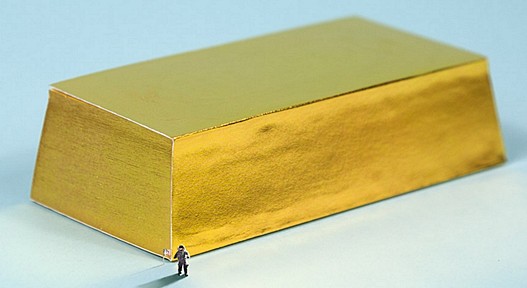 I started building the graphic for this post in the summer of 2013, but abandoned it because working on it was too hard on my eyes. I came across the work-in-progress yesterday when I was doing housecleaning on this computer, and decided to finish it, since my eyes are much better now.

I had also saved a page with all my calculations involving the national debt, which at that time was estimated at $16 trillion. It’s roughly $18 trillion now — a 12.5% increase in just two years. In the same period of time, the price of gold has dropped by $100 an ounce. It was about $1,300/oz when I did the earlier calculations, and it’s hovering right around $1,200/oz this evening. Which seems counterintuitive to me, but then so does a lot of the other economic news these days.

I’ve redone all the calculations, finished the graphic, and am rushing everything into print before the debt clock and the gold markets make it obsolete again.

Let’s suppose the United States had to pay off its accumulated debt in gold. How much gold would that be, based on today’s market prices?

When I looked into how much gold would be needed to add up to $18 trillion, the scale of the resulting graphic would have been too exaggerated to make visual sense — the astronaut standing next to the gold bar would have been too tiny to be recognizable in a normal-sized image. The calculations below are based on paying off one quarter of the national debt, or $4,500,000,000,000 ($4.5 trillion).

That’s as big as a McMansion, but remember: it represents only 25% of the national debt. Four of those piles taken together would be as big as the Ritz.

According to the BBC, the world’s entire supply of gold is estimated at 171,300 tonnes, or “long tons”. Multiplying that number by 1.1023 gives us 188,826 “short tons”. The 117,188 tons necessary to pay off one quarter of the debt would thus consume five-eighths of all the gold in the world. To pay off the entire national debt would require 2.5 times the world’s gold supply.

If it wasn’t obvious before, it should be clear by now that the U.S. national debt will never be paid off. There is no indication that the debt will ever be reduced; in fact, its growth is accelerating. Productivity is not rising at a level that would increase national wealth enough to provide the requisite tax revenues. Congress and the Executive are not reducing spending. And the Baby Boomers are retiring now by the millions, which will draw down Social Security and Medicare, forcing the debt to rise even faster.

Every national political official, elected or appointed, knows all this. If he has an IQ above room temperature, he knows that in the long run, there are only two choices open to the federal government: (1) Default on the debt, or (2) monetize it. Or some combination of both.

Monetizing the debt — what is commonly known as “printing money” — is the most likely outcome; it avoids reneging on international agreements. The process has already begun with the repeated regimes of “quantitative easing”, but those have not worked their way through to massive price inflation yet.

One reason is that the prices of gold and silver have not risen to levels that would normally be expected, given the increase in the paper (or really, digital) money supply. Everyone I’ve talked to who has any expertise on the topic says that the only way this can be explained is by price manipulation in the precious metals markets. For example: it is thought that federal regulators have allowed (if not encouraged) the issuance of paper silver futures far in excess of all the silver in the world, even including known reserves that have not yet been mined.

High-flying traders can keep passing these IOUs around all they want. Everyone pretends that they have real value, but they don’t. At some point the holders of all these pieces of paper will try to redeem them, and that’s when the fun begins.

I’ve learned not to predict when the day of reckoning will arrive — it has been postponed five or six years longer than I ever thought it could be — but arrive it will. Maybe not this decade, maybe not in my lifetime. But it has to happen; it’s mathematically inevitable.

The fiat money system must someday collapse, and the Palace of Paper — which is far larger than the Ritz — will come fluttering down.

20 thoughts on “The Gold Bar as Big as the Ritz”