OOPS…UPDATED with all links working now. Must have been those pesky leprechauns again. Later update: the photo of Prune Face.

The Baron has gone into town to do our weekly shopping. I have been left with strict orders to stay out of trouble…

…Honest, all I was doing was a teeny little bit of weeding after I hung out the wash. Just the smallest bit. And now I can’t move my arm…

But one of our essayists sent these links so I thought I’d share them.

They all concern the karma surrounding our Senate Minority Leader, Harry Reid, known to some of us as Prune Face (because he never seems to smile much). 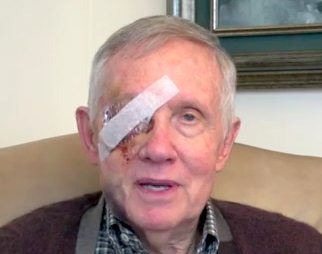 [Added by the Baron after he returned from the big city]

I just read a summary on Breitbart of what Harry Reid has to fear from a new Attorney General if the Republicans win the presidential election. Of course, it depends on who that is, whether there will be any action or just a “dialogue.” But this is being given as an alternative reason for his retirement.

Reflecting on this made me return to my original reaction to his accident, and then to a history of accidents, shown below. Starting with the “exercise” accident, there are at least two descriptions of what happened and where. One in the gym and one in the bathroom, both — for someone who has done any exercising — borderline incredible. (See first story below)

A survey shortly after revealed that ca. 91% if those asked do not buy the story. (See fourth story)

Then there are the other accidents. His wife and daughter involved, sustaining bad but not life-threatening injuries when rear-ended in DC by a semi. Under investigation. (See second story)

Finally, his motorcade involved in a multi-car crash — no explanation of how or why from the state police. (See third story)

Considering his and his son’s involvement with shady characters of various sorts, foreign and domestic, I recall all those TV police serials where pressure is exerted by violence to exact obedience or silence. I love a good conspiracy theory.

I have to agree with him. There are so many conspiracies floating about that it’s hard to choose. This one is all Americana, though. Las Vegas rumors, brass knuckles, car “accidents” – but wait, no guns. Not yet, anyway. I hope Harry doesn’t agree to any one-way rides to the desert outside of town. At least he has the comfort of money: if he makes it to his planned retirement next year, he’ll have his nice Senate pension and the five million dollars he managed to save from his Senate salary.

The links to these news reports are below the jump. I haven’t read them yet either. Probably just a bunch of malarkey made up by jealous Republicans.

If my arm were working well enough I’d put in an image of the bruised and battered, the Honorable Harry Reid. Sigh.

I will tell you, though, that I surely do believe Mr. Reid fell off his exercise equipment. See, that’s what comes of exercising. Especially in Las Vegas with your friendly local mobsters Boy Scouts. Don’t climb on that exercise machine, y’all. Lie back on the couch and pick up the TV clicker… or whatever they call that thing that changes the channels.

I stopped watching TV back when we had to walk up to the screen and hit buttons. That’s the only safe exercise there is.

7 thoughts on “Rife with Rumor and Conjecture”