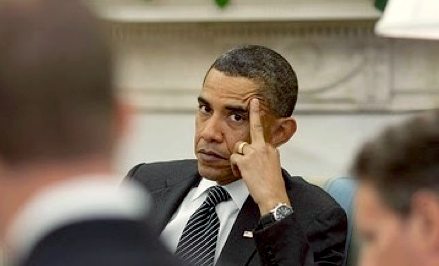 This president is so immature he’s becoming a national embarrassment.

First he snubs the NATO Secretary General who was in town this week:

President Barack Obama has yet to meet with the new head of the North Atlantic Treaty Organization, and won’t see Secretary General Jens Stoltenberg this week, even though he is in Washington for three days. Stoltenberg’s office requested a meeting with Obama well in advance of the visit, but never heard anything from the White House, two sources close to the NATO chief told me.

The leaders of almost all the other 28 NATO member countries have made time for Stoltenberg since he took over the world’s largest military alliance in October. Stoltenberg, twice the prime minister of Norway, met Monday with Canadian Prime Minister Stephen Harper in Ottawa to discuss the threat of the Islamic State and the crisis in Ukraine, two issues near the top of Obama’s agenda.

Kurt Volker, who served as the U.S. permanent representative to NATO under both President George W. Bush and Obama, said the president broke a long tradition. “The Bush administration held a firm line that if the NATO secretary general came to town, he would be seen by the president … so as not to diminish his stature or authority,” he told me.

America’s commitment to defend its NATO allies is its biggest treaty obligation, said Volker, adding that European security is at its most perilous moment since the Cold War. Russia has moved troops and weapons into eastern Ukraine, annexed Crimea, placed nuclear-capable missiles in striking distance of NATO allies, flown strategic-bomber mock runs in the North Atlantic, practiced attack approaches on the U.K. and Sweden, and this week threatened to aim nuclear missiles at Denmark’s warships.

“It is hard for me to believe that the president of the United States has not found the time to meet with the current secretary general of NATO given the magnitude of what this implies, and the responsibilities of his office,” Volker said…

“Hard to believe” this? Obama appears to go out of his way to play hardball all by himself. The NATO Secretary General is a former prime minister of Norway and his politics are the leftist variety of which Obama is so fond.

Perhaps our president, with less than two years left to serve, is simply bored and menopausal. Perhaps he had a golf week scheduled. Or maybe March Madness basketball interfered with having to perform pesky duties. Maybe Stoltenberg refused ahead of time to kiss his ring. Whatev.

That oddity was but a passive-aggressive insult; it doesn’t begin to reach the level of his newest revenge on Israel for refusing to knuckle under. How dare they re-elect a prime minister Obama loathes? Now it’s time to bring his gun to a knife fight in a petty display of power:

In a development that has largely been missed by mainstream media, the Pentagon early last month quietly declassified a Department of Defense top-secret document detailing Israel’s nuclear program, a highly covert topic that Israel has never formally announced to avoid a regional nuclear arms race, and which the US until now has respected by remaining silent.

But by publishing the declassified document from 1987, the US reportedly breached the silent agreement to keep quiet on Israel’s nuclear powers for the first time ever, detailing the nuclear program in great depth.

The timing of the revelation is highly suspect, given that it came as tensions spiraled out of control between Prime Minister Binyamin Netanyahu and US President Barack Obama ahead of Netanyahu’s March 3 address in Congress, in which he warned against the dangers of Iran’s nuclear program and how the deal being formed on that program leaves the Islamic regime with nuclear breakout capabilities.

Another highly suspicious aspect of the document is that while the Pentagon saw fit to declassify sections on Israel’s sensitive nuclear program, it kept sections on Italy, France, West Germany and other NATO countries classified, with those sections blocked out in the document.

The 386-page report entitled “Critical Technological Assessment in Israel and NATO Nations” gives a detailed description of how Israel advanced its military technology and developed its nuclear infrastructure and research in the 1970s and 1980s.

Israel is “developing the kind of codes which will enable them to make hydrogen bombs. That is, codes which detail fission and fusion processes on a microscopic and macroscopic level,” reveals the report, stating that in the 1980s Israelis were reaching the ability to create bombs considered a thousand times more powerful than atom bombs.

It may be the case that this declassified material is already well-known among global intelligence agencies. But at the very least such carefully chosen revelations send a message to the citizens of Israel. The question is, what message did Obama intend, and what message did Israelis receive? Those may be two entirely different communications.

The message the American people are getting in the last month or so is that our President is a City of One. He is imperious, which is a problem in a democratic culture but it’s one we can deal with; we have before. But his gross incompetence in foreign affairs, an incompetence only the media and the Left is willing to ignore, is metastasizing. It grows more obvious by the day. We are long past scandals and into the land of severely compromised morality.

No, we shouldn’t impeach him. That is exactly what he wants: to start a race war while he sits back and pontificates. Instead, it’s time for world leaders to show some spine, to build one of their famous cordons sanitaires in order to limit this Peace Prize recipient’s tantrums and rage. Step up to the plate, Western world. Show some spine. Leave him to fester in his Oval Office until it’s time for his departure.

Only then can the world breathe a sigh of relief.