“This is a bad deal — we’re better off without it.”

Israeli Prime Minister Benjamin Netanyahu addressed the U.S. Congress this morning, at the invitation of Speaker of the House John Boehner. His primary topic was the current nuclear weapons deal with Iran being negotiated by the “P5+1”, which is reportedly close to being finalized.

Below is a CSPAN video of the entire speech:

House Minority Leader Nancy Pelosi (D-CA) was not happy with Mr. Netanyahu’s address. During the applause after his climactic line — “Even if Israel has to stand alone, Israel will stand” — she turned her back on the prime minister (the photo below is a screen cap of that telling moment). 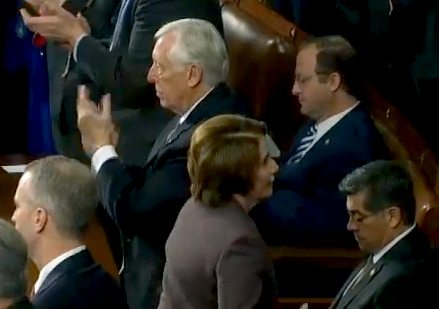 Afterwards she expressed her displeasure to the press:

“I was near tears throughout the prime minister’s speech — saddened by the insult to the intelligence of the United States,” she fumed in a statement afterward, adding that she didn’t appreciate “the condescension toward our knowledge of the threat posed by Iran and our broader commitment to preventing nuclear proliferation.”

President Barack Obama did not attend the speech, and said he did not watch it. A video of his response to Mr. Netanyahu is available here.

26 thoughts on ““Even if Israel Has to Stand Alone, Israel Will Stand””