Okay, I’ve been around the blog block a time or two so I know the score (or at least I can see it if I squint hard).

So. Of all the words issuing forth on Senator Harry Reid’s unfortunate fall from Grace – or maybe from Sea Biscuit – the best are on The Other McCain’s website, guest-posted by her worthiness, Sissypus the Blog Kitty. 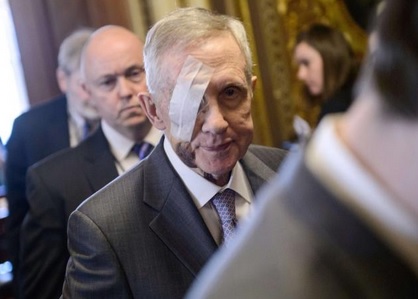 I got word via Her Majesty’s spy network (what’s a little ‘stealth outsourcing’ between frenemies, eh?) that Tony Scambilloni had a flight booked for Dulles. This within hours of the surprise announcement that Harry “the Cadaver” Reid was not intending to transition from un- to fully-dead right there on the Senate floor, railing about the Koch brothers or some other invented anti-Progressive bugbear. No, Poor, Poor, Pitiful Reid would leave his final trail of embalming fluid in the Senate halls after the 2016 election, and return to afflict Searchlight, Nevada with his lousy personality.

In stark contrast, how can you not love a Renaissance thug like Tony, whose art forgeries cost almost as much as an evening engagement with his chamber quartet, Chin Music? Of course, he had no hourly rate for his “professional services”, which ran the gamut of consulting from matters of body, to mind, to soul.

Access to the 5th floor ventilation in the Hart Building, especially on such short notice, would have been relatively hard for anyone bigger than a feline. Especially without the correct connections. However, arrangements were made, and a helpful security guard “let the cat out of the bag”. (Oh, shut up! You’d’ve used that gag, too.)

The wait was less than an hour there, behind the ventilation grill in the corner of room 522. Harry sat at his desk, illuminated by a banker’s lamp, his good side in profile, one chair and the door in view. Reid, shaking and wheezing, worked at a stack of paper, and swore with more rhythm and passion than one would have thought him incapable of mustering, based upon the usual stream of porridge he emitted on the Senate floor.

The door opened abruptly, with a precisely measured fury. The hall light flooding the room mostly shadowed a man in a black suit bearing an instrument case. Tony.

Reid’s remaining good eye got squinty. “What the philharmonic are you doing here?” he demanded, as Tony shut the door firmly, then strode over to sit in the visible chair. He could have been visiting a junior college professor, and not the United States Senate Minority Leader, for all the waves of disdain exuded. The instrument case occupied what I presumed was another chair on the opposite desk corner. The light of the banker’s lamp on the desk somehow moved Tony’s look away from Robert DeNiro and more toward a Harvey Keitel.

Oh, Lordy. Pure poetry and purple prose – in a noir kind of way – from Sissypus, that Greek beauty of a boulder roller on Mr. McCain’s staff.

Believe me there is more in the same vein, so to speak, over there, including a link to this piece of modern genius:


The fB [future Baron] came home from college one year with that piece playing over and over in his brain. He sat at the piano, playing it over and over, compelled to get it down right. What surprised me most is that I could tell it was played in the key of Requiem.

A hat tip and gratias plena to Bill C. in the comments for this link.

9 thoughts on “A Dream Deferred and Stomped On”