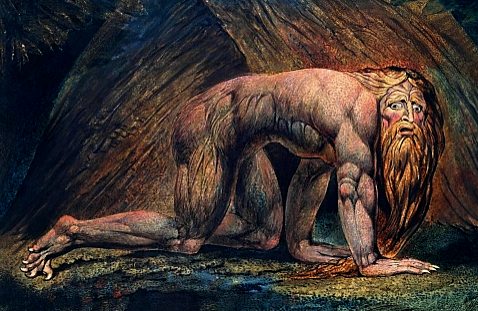 The picture above is a color monotype print by William Blake, from a copy in the Tate that was impressed ca. 1805. It represents King Nebuchadnezzar of Babylon during his time in exile, when he was driven into madness as a punishment for his overweening pride. I’ll be using the image for another post in the next day or so, but the process of hunting it down brought to mind the lyrics of a song by Robert Hunter called “Book of Daniel”.

The excerpt below describes the moment when the prophet Daniel was summoned to the royal palace of King Belshazzar, the son of Nebuchadnezzar, to interpret the words mene, mene, tekel, upharsin as written on the palace wall by a disembodied hand:

Daniel walked in bent but tall, spat upon the floor
Let me see these words… well, hmm — yes… I’ve seen them before
They simply mean your days are numbered; fact, they’re even run
You’ve been judged in the balance and found wanting
Your royalty is just a gift — your father learned that lesson
By losing both his kingdom and his reason

So great in pride he was cut down, driven to the field —
Lived there like a wild beast until his pride did yield
And when the king, your father, achieved humility
He was restored his kingdom and his sanity

And though you knew all this to start, you humbled not your heart
The writing on the wall commands your fall!

There seem to be an awful lot of Belshazzars in the world today, living in sumptuous splendor, ruling their peoples with an iron fist, and all the while offering sacrifices to the gods of silver, stone, and wood. No hope of redemption for them. No chance of learning humility the way Nebuchadnezzar did, eating grass in the fields like a wild beast.

For each of them there is a Darius or a Cyrus waiting in the wings to ring down the curtain on his prideful performance.

What shall be the end of this? How shall it pass away?
Get up, old Daniel, never mind, get up and go thy way
Further words are closed and sealed until the end of time
Many shall be called, each in his season
In wickedness of pride is lost the light to understand
How little grace is earned and how much given

3 thoughts on “Your Days Are Numbered”